In her inauguration speech, Zuzana Caputova pledged to fight injustice and impunity. The 45-year-old is the country's first female president and the youngest person ever to be elected to the office. 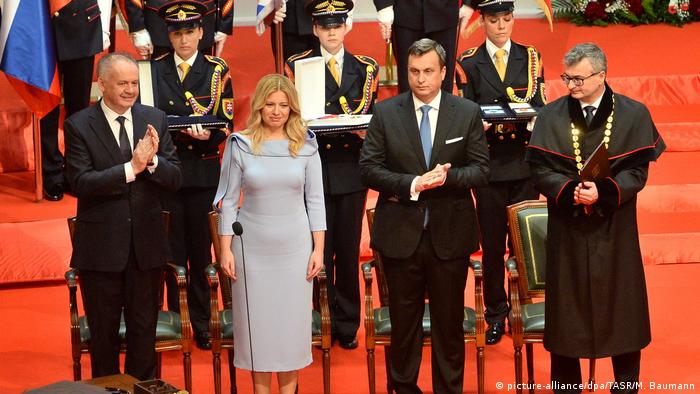 Anti-corruption activist Zuzana Caputova kicked off her five-year term as president of Slovakia on Saturday by calling for state officials incapable of standing up to corruption to lose their jobs.

Addressing Slovak lawmakers after a swearing-in ceremony, Caputova pledged to make the justice system work for everyone.

"Under the constitution, people are free and equal in dignity and in rights, meaning nobody is that irrelevant to have their rights compromised, nor is anyone that powerful to stand above the law," she said in her inauguration speech.

"Too many people feel that this is not quite the reality in our country. The feeling of injustice has grown and has demonstrated itself in calls for change and decency but also in anger over 'the system,'" she added.

Slovakia was deeply shaken by last year's murder of investigative reporter Jan Kuciak. The 27-year-old journalist and his fiancée were gunned down in his home near Bratislava as Kuciak was preparing a story on ties between Slovak politicians, local businessmen and the Italian mafia.

Caputova, who made her reputation as a pro-environment lawyer and anti-graft crusader, took part in the resulting protest that forced then-Prime Minister Robert Fico to resign.

Five people have since been charged over the double murder, including Slovak businessman Marian Kocner. Many believe Kocner has ties to Fico's Smer-SD party. The entrepreneur has denied any wrongdoing.

More than a figurehead

On Saturday, Caputova also said she "did not come to rule" but to "serve the citizens."

At 45, the single mother of two is the youngest person ever to be named the president of Slovakia, a formerly socialist country of 5.4 million people. She is also the first woman to be voted into the office.

Read more: What did Slovakia's government know about murder of Jan Kuciak?

Caputova scored a convincing victory against Smer-SD candidate Maros Sefcovic in March. Her allies from the Progressive Slovakia/Together party hope to use the momentum to unseat the ruling party in a 2020 general election.

The presidency has far less power than the prime minister's office, which is currently held by Peter Pellegrini from Fico's Smer-SD party. Even so, Caputova is now officially the commander-and-chief of the country's military and can veto laws and appointments of senior prosecutors and judges, giving her influence over anti-corruption reforms.