Slovakia has just elected its first female president a year after a journalist's murder triggered calls for change. Political novice Zuzana Caputova ran on a slogan of "Stand up to evil." 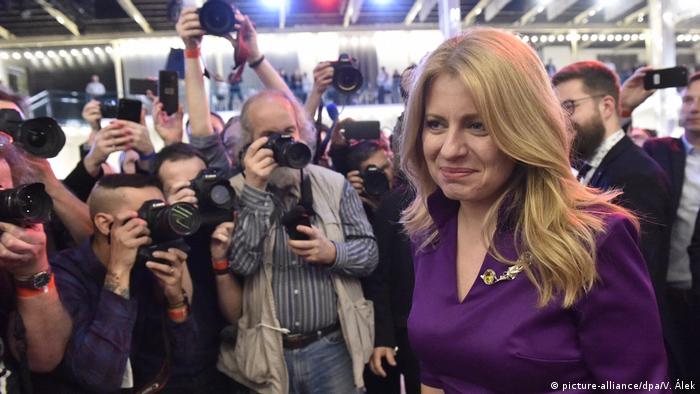 Victory for the anti-corruption activist breaks a trend of populist, euroskeptic politicians gaining traction across the European Union.

Caputova thanked voters in Slovak, Hungarian, Czech, Roma and Ruthenian: "I am happy not just for the result but mainly that it is possible not to succumb to populism, to tell the truth, to raise interest without aggressive vocabulary."

"This started in the local election last year, was confirmed in the presidential election, and I believe the European [parliamentary election in May] will confirm it as well."

Sefcovic told reporters he called Caputova to congratulate her on the win and said he would send her flowers: "The first female president of Slovakia deserves a bouquet."

Caputova is due to be sworn in on 15 of June.

The pro-European leader is a 45-year-old environmentalist and anti-corruption activist who supports gay rights and opposes a ban on abortion. She has no political experience and ran as the candidate for the Progresivne Slovensko party on a slogan of "Stand up to evil."

She gained prominence marching alongside 5.4 million people in anti-government protests after investigative journalist Jan Kuciak and his fiancee were gunned down in February 2018. She has vowed to stamp out corruption and influence peddling among prosecutors and police.

Read more: What did Slovakia's government know about murder of Jan Kuciak?

Who is Sefcovic? Sefcovic is a career diplomat who is pro-EU and serves as a vice president in the European Commission, the European Union's executive body. He is supported by the ruling leftist Smer-Social Democracy party, a major force in Slovak politics.

Ceremonial post: The presidency is less powerful than the prime minister's office, but the president is responsible for ratifying international treaties and appointing top judges, is commander-in-chief of the armed forces and can veto laws passed by parliament.