Huge crowds have rallied across Slovakia to demand snap elections. The resignation of Prime Minister Robert Fico has failed to ease a political crisis triggered by the murder of an investigative reporter. 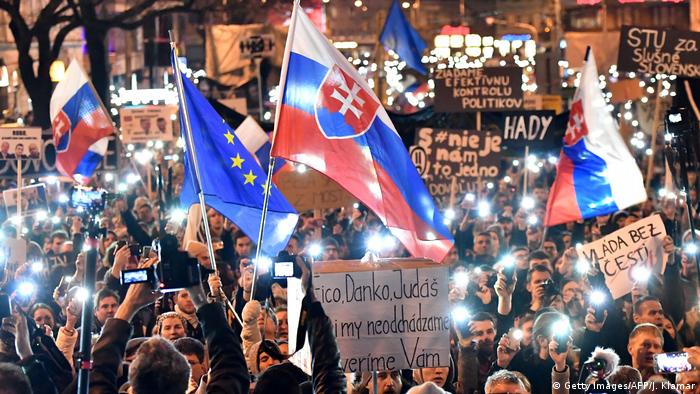 Tens of thousands of Slovaks staged anti-government protests in Bratislava and several other cities on Friday to call for early elections and justice for slain journalist Jan Kuciak.

The 27-year-old and his fiancee were found shot dead in their home last month. He had been working on an investigation into high-level corruption and alleged mafia links to politicians in Slovakia.

The killings have reignited debate about corruption and press freedom in the country, triggering the biggest anti-government demonstrations since the collapse of communism.

That move, which will keep his three-party coalition in power and avoid snap polls, has angered many Slovaks who believe Fico will still be in a position to call the shots.

"Coalition leaders are clinging to power at any cost," rally organizer Karolina Farska told a crowd of some 50,000 people in Bratislava. This "proves that they want to sweep all the corruption cases under the rug — the cases that the slain Jan Kuciak was writing about."

Protests were held in around 35 towns and cities across Slovakia on Friday, with many participants braving rainy conditions as they chanted "Early elections!" and "Enough of Fico."

Earlier on Friday, Pellegrini said he believes his government will "calm the situation in our country."

Police say Kuciak's death was "most likely" related to his investigation into alleged ties between Slovak politicians and Italy's 'Ndrangheta mafia. Although they have questioned dozens of suspects, no one has been charged over the killings.

WorldLink: The murder of Jan Kuciak