Protests have erupted in Abkhazia, a Caucasus region recognized by Russia and few others which broke from Georgia after the 1991 Soviet collapse. Russian agencies say the region's leader has fled the capital Sukhumi. 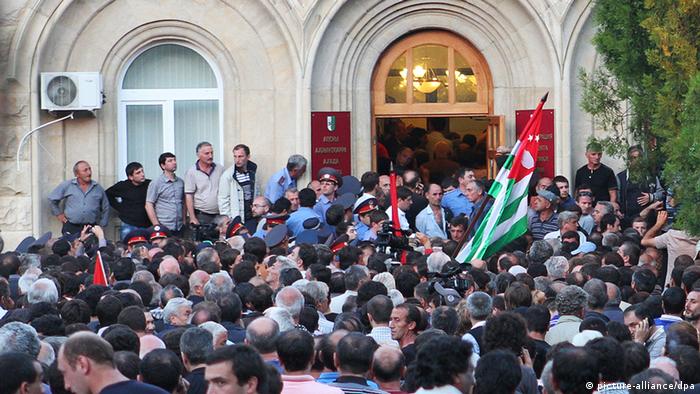 Abkhazia's leader Alexander Ankvab was quoted on Wednesday by the Russian news agency Interfax as saying he was facing an "armed coup attempt."

Abkhazia, which most of the world still regards as part of Georgia, broke away during a civil war in the 1990s. In 2008, Russia fought a five-day war with Georgia over this territory and the other breakaway region of South Ossetia. Along with Russia, Nicaragua, Venzuela and Nauru are the UN members to recognize Abkhazia and South Ossetia as independent.

Interfax, quoting unnamed sources, said Ankvab had fled to his home district in northwestern Abkhazia. The Abkhaz parliament was set to hold a special session.

The protest by some 1,000 people in Sukhumi on Tuesday night culminated in a claim by opposition leader Raul Khadzimba that a coordination council would take over the "leadership of the republic."

Opponents, including Khadzhimba, accused Ankvab's administration of exercising authoritarian rule and mishandling relations with Moscow to the extent of being too reliant on Russian subsidies.

Ankvab replied in a televised address that he remained in Abkhazia and that security forces were "taking measures to stabilize the situation."

"I haven't left, I am still in Abkhazia," said Ankvab, who was elected as the region's president in 2011.

Khadzhimba, who was the opposition challenger in 2011, said Ankvab had agreed to dismiss his cabinet.

"We will not leave until we get what we want," Khadzhimba reportedly told opposition supporters.

Changes ahead in Georgia

In a remarkably low-key election, voters have handed the presidency to Georgi Margvelashvili of the ruling Georgian Dream party. Margvelashvili, a low-profile cabinet minister, was the Prime Minister's favored candidate. (28.10.2013)

NATO does not want to escalate the crisis with Russia, which is why neither Ukraine nor Georgia can expect to join the alliance any time soon. Georgia can still hold out some hope for closer talks in September. (03.04.2014)