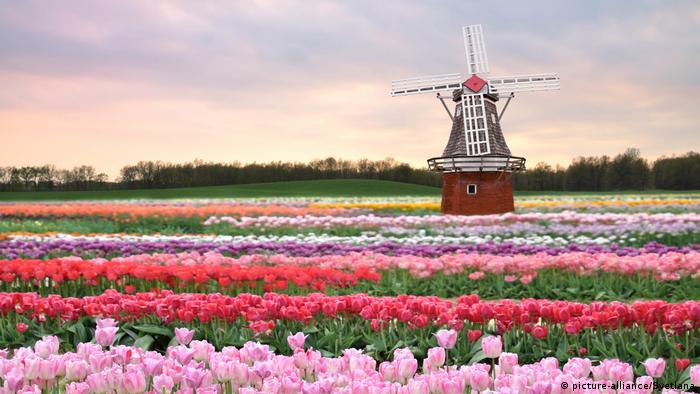 The small, overcrowded, low-lying Netherlands might not sound like the answer to feeding a world whose population is predicted to rise to 9.6 billion people by 2050, but farmers and agronomists there would beg to differ.

The country known best globally for its traditional tulips and wooden footwear, is the second largest vegetable exporter in the world — with exports totalling €6 billion annually. Onions, potatoes and some southern climate vegetables such as tomatoes, peppers and chiles are among its top selling products.

The Netherlands is growing them with far less water and pesticides than if production was happening in the soil or open air.

They do it using greenhouse technology, termed 'precision farming', that some in the Dutch food industry claim is the most advanced in the world.

Modern greenhouse farming took off in the country after World War II as a reaction to one of Europe's last experiences of famine. Up to 20,000 people died in the "Dutch hunger winter", during the last months of the German occupation.

Nowadays, the most advanced part of the country's greenhouse  technology is in the southern region of Westland, where 80 percent of cultivated land is under glass. 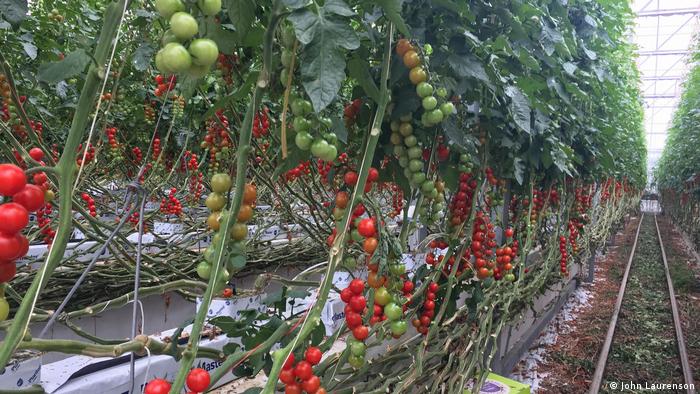 In the Dutch farming region of Westland, farmers tend to grown tomatoes in bags rather than soil

"In the end, the plant is around 13 to 14 metres (42.7 feet to 45.9 feet) long and will produce about 33 clusters of tomatoes," Ad van Adrichem, general manager at Duijvestijn Tomatoes told DW.

Reaching such heights is important in a country where land is as precious as it is scarce: the tiny Netherlands has one of the highest population densities in the world. In the greenhouses of Westland, an area that was reclaimed at great cost and effort from the sea, they grow almost 70 kilograms (154 pounds) of tomatoes per square meter.

That's at least 10 times the average yield from an open field in Spain or Morocco, but with eight times less water and practically no chemical pesticides.

The secret to the success is that Dutch tomatoes are grown in small bags of mineral wool — a fibrous material that can also be used for insulation and soundproofing.

"It gives you far more control," said van Adrichem. "So we can steer very precisely the amount of nutrition we need and the amount of water we need."

But that's not all that's at play. There are also the greenhouses themselves. Duijvestijn Tomatoes has invested in a revolutionary double-glass roof which conserves more heat and, thanks to special coatings, diffuses the light that gets through, thereby making sure it also reaches the plants' lower leaves.

The constant warm temperature comes from two geothermal wells. The level of CO2 gas on which the plants thrive, is doubled in the air inside the greenhouse, carefully piped in from the local oil refinery. LED lights inside these state of the art stuctures allow the crops to keep growing into the night. 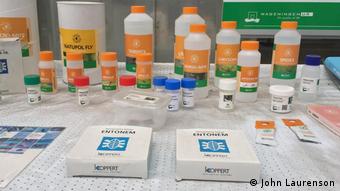 Instead of using pesticides, Duijvestijn Tomatoes unleashes insects in a box to deal with pests

The water used is all pure Dutch rain, captured and stored in an underground layer of sand for use through the dry months. Whenever pests appear, they bring in insects to eat them.

They even have cardboard hives of bees on hand for pollination.

Yet some ecologists are skeptical of the new technology. Herman van Bekkem, campaign leader for Greenpeace Holland, is one of them.

"We indeed see promising examples of farmers doing their best to reduce pesticides," he told DW.  "But if you look at the facts, like the statistics for water pollution in the Netherlands, there is no other region more polluted by pesticides than the greenhouse region."

He says water managers in Westland have been complaining about the high amounts of pesticides in surface water for many years.

"Not from us." said van Adrichem. "We work with a closed water circuit. We give the plants the exact amount of water they need and because the tomatoes aren't planted in the soil, there is no run-off." 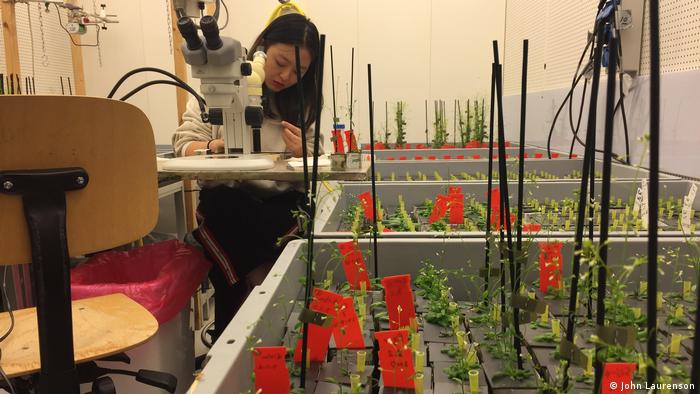 Half the students at WUR are from abroad, and when they finish their studies, many will be taking this new science home to countries in Asia and Africa. WUR Plant Sciences Group managing director Ernst van den Ende describes a project he is working on in Africa that optimizes the symbiosis between beans and a bacterium that is able to fix nitrogen — a key plant nutrient — from the air.

Read more: From grey to green: Urban farming around the world

"By optimizing this symbiosis, we are able to increase yields without using fertilizers," said van den Ende.

For him, WUR's research is about stopping people going hungry, as his grandparents' generation did in the Netherlands.

"My grandmother would travel 80 kilometers for a sack of brussel sprouts," he said. Now van den Ende believes the technology the Dutch are developing will, in years to come, be able to feed the world.