Coronavirus: Treating European patients in Germany | Germany | News and in-depth reporting from Berlin and beyond | DW | 27.03.2020 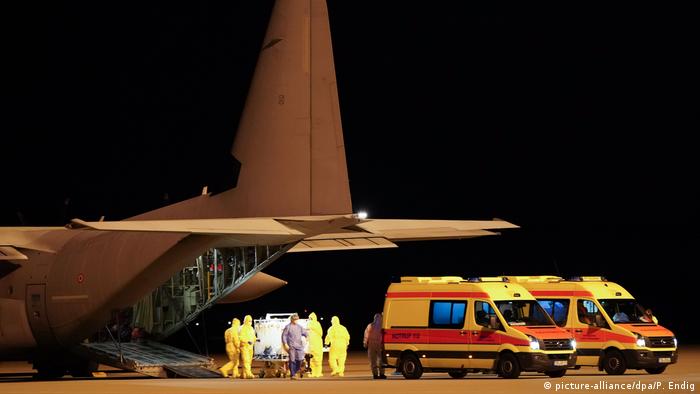 Owing to the coronavirus pandemic, most of Europe's borders were closed this week, on the 25th anniversary of them being opened as part of the Schengen Zone. However, some of the worst-hit regions in Europe have dispatched patients to hospitals in Germany and other European neighbors, after receiving offers of help.

The eastern Alsace region of France, which borders Germany, is among the worst hit in the country. As well as airlifting patients to clinics in Germany and Switzerland, it is also sending around 20 more west on specially repurposed high-speed TGV trains for treatment elsewhere in France. The trains set off on Friday.

The shortages the region is facing have already become familiar, namely intensive care beds and respirators.

"In my region the situation is really critical," explains Brigitte Klinkert, who heads the local government of the Haut-Rhin administrative district in France. Its medical facilities in Mulhouse and Colmar are at breaking point. "We are setting up more and more intensive care beds, but it's simply not enough." More than 350 people have died in her region just in the last three weeks, and Klinkert concedes that more may have died at home who are not yet counted in the list, which incorporates casualties at health facilities and care homes.

"To be honest, when I sent out those mails, I did wonder: 'Will I get an answer?' It was an extremely pleasant surprise when offers poured in," Klinkert admits. "Of course we work very closely together and are great friends with many connections, but this was an incredible demonstration of cross-border cooperation — of European solidarity. In more normal times, our regions are completely interconnected. It's really emotional for us to see this chain of solidarity with Germany, Switzerland and the rest of France."

Patients from Alsace are receiving treatment at a series of clinics across the three German states closest to the Alsace region. So far, the willingness to help has outstripped the medical transport capacity. The cross-border transfers to hospitals are only possible using helicopters at present; Haut-Rhin has three of these in service running at capacity.

A young Bundestag member from Angela Merkel's Christian Democrats led the push for the eastern state of Saxony to take on eight Italian patients from the Lombardy region.

Marian Wendt, 34, is on the committee for German-Italian cooperation in parliament.

"I'd been in regular contact with the German embassy in Rome and the Italian embassy in Berlin of late, because we had a series of challenges to solve: Masks couldn't be delivered across the border, protective suits were held up at Frankfurt airport," Wendt says. "During these exchanges, we hatched the plan to treat patients from Lombardy in Germany."

Wendt says that while politicians in Saxony discussed the pros and cons at length, and recognized the logistical and political challenges, they quickly agreed that they should try to help.

At first, Saxony was one of Germany's least affected regions, but the number of coronavirus cases has been picking up pace in recent days. Now it has a share of the national total of cases almost proportional to its population (roughly 1,500 of the more than 43,000 confirmed nationwide). But Wendt is confident that local doctors, who were "immediately prepared to help" when asked if medical transfers from Italy would be possible, do not run the risk of becoming overburdened.

"I would never have started an initiative like this if I had heard concerns of this type from our doctors in Saxony," Wendt says. "Our clinics are well equipped and have a large number of free intensive care beds with respirator facilities thanks to the emergency measures already put in place." 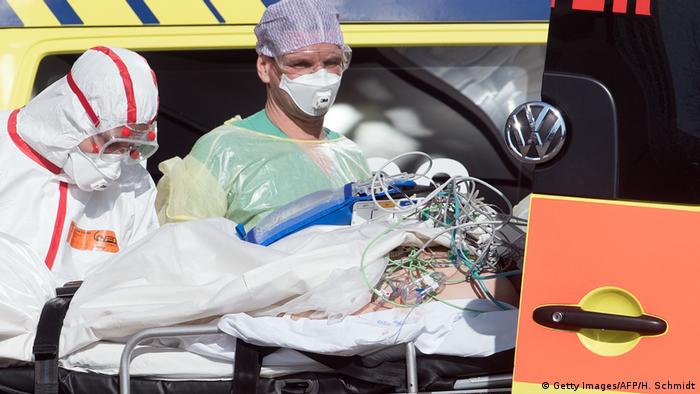 Wendt also mentions the assistance Saxony received from neighboring countries during the serious flooding of 2002 and 2013, saying he was pleased to offer something back to European neighbors in need.

"The virus is a global threat. We can only combat it successfully if we pool all our resources," Wendt says.

Several hundred kilometers to the west, Brigitte Klinkert has reached similar conclusions as Germany, Switzerland, Luxembourg and other areas of France scramble to help the Grand-Est region bordering Germany.

"I spoke at quite some length with doctors from [the southwestern German state of] Baden-Württemberg while organizing this," Klinkert tells DW. "And one of the things we agreed was that we really must set up a meeting after this crisis is over, to talk about how we can continue to help each other medically in the future."

With a very real likelihood of continued regional fluctuations as the coronavirus spreads, opportunities for further cross-border medical cooperation could present themselves far more quickly than that.