Coronavirus: South Korea fears quarantine dodgers could cause new wave of infections | Asia | An in-depth look at news from across the continent | DW | 01.04.2020 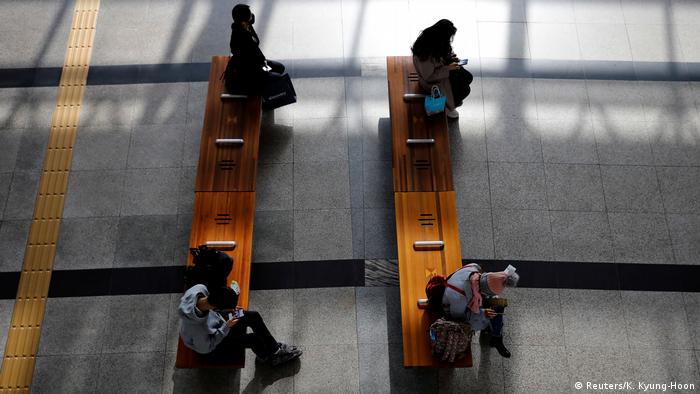 The South Korean government on Wednesday imposed strict new quarantine regulations on anyone entering the country, a decision partly driven by public anger over a number of foreign nationals who have been caught ignoring self-isolation rules to halt the spread of the coronavirus.

Domestic media have highlighted three cases involving foreign visitors who failed to abide by the mandatory two-week quarantine period, including a German student in the southern city of Busan.

The 25-year-old student at Pusan National University, who has not been arrested and has therefore not been named by the authorities, reportedly displayed no symptoms of COVID-19 when he arrived in South Korea on March 20. He had visited the United States and Japan before entering South Korea, officials of the Busan city government told Yonhap News.

Despite having no symptoms, the young man was required to undergo a period of self-isolation in his student accommodation.

Over the following days, however, he went to several university offices, walked along the city's popular Haewondae beach, used the subway to travel around some of Busan's most popular tourist sites and played basketball.

But a few days after arrival, the student developed a cough, a high temperature and other COVID-19 symptoms.

He took a coronavirus test on March 26, but again ignored an order to remain isolated until the result was available. He reportedly went to a coffee shop and two bars in the city, as well as the university cafeteria.

Similarly, a British man living in the city of Suwon, south of Seoul, failed to isolate himself after returning from a trip to Thailand on March 20. Over the next five days, he visited three other cities, played golf, came into direct contact with 23 people and never wore a mask. He also ended up testing positive for COVID-19.

In a post on Facebook, Suwon Mayor Yeom Tae-young said the man would be "held responsible" for his actions, adding, "the city will deal with this sternly."

In yet another case, authorities in the Yongsan district of Seoul have requested that police investigate the actions of a Polish national who has the illness and was reported by his neighbors for failing to follow quarantine requirements.

The JoongAng Ilbo newspaper has reported that police used footage from surveillance cameras to confirm that he visited local shops and a children's playground and that local people demanded that the local authority disinfect the area.

The authorities are calling for the man to be charged with violating the Infectious Diseases and Control and Prevention Act.

Anyone found guilty of breaking the law can be fined up to 3 million won (€2,230, $2,435) and face a maximum of one year in prison, although the maximum financial punishment is being raised to 10 million won from April 5.

"A lot of people are very angry because those who act like this are not just putting themselves at risk, they make it much easier for other people to also get sick," said Song Young-chae, a professor at Seoul's Sangmyung University.

"We realize that only a small minority of foreigners are not following the rules, but the big fear here now is that while the number of new cases appears to have stabilized and we're not seeing so many people die, the experts say there is a possibility of a second wave of infections brought into the country from abroad," he told DW.

"We must do everything that we can to stop a second pandemic and that is why most people support the decision to have mandatory two-week quarantine for all arrivals," he said. "In truth, I believe it is something that should have been done long ago."

South Korean authorities reported 101 new infections on Tuesday, down from 125 cases the previous day but bringing the total to 9,887 cases. Three more people died of the illness on Tuesday, bringing the number of fatalities to 165.

Of the 125 new cases reported on Monday, nearly a quarter came from abroad.

Concerned at the possibility of a second bout of the virus getting a grip, President Moon Jae-in has warned of "strong legal measures" against anyone who ignores the government's self-isolation orders.

"It's crucial for them to abide by the two-week mandatory quarantine rule that goes into effect tomorrow."

Daniel Pinkston, a professor of international relations at the Seoul campus of Troy University, said there will always be a minority of people who feel "the rules do not apply to them."

"There are people who leave their neighborhood, go abroad and feel that they are subject to a different set of rules to everyone else," he said. "You see it with the US university students partying in Florida for spring break; they have thrown the rules out the window."

"Also, there is clearly a percentage of people who are not taking this thing seriously because of the leadership that they listen to or the media they read," he added.

David Tizzard, an assistant professor at Seoul Women's University and a commentator on social issues, says that while there may have been public anger at the actions of a few foreign visitors, it has not manifested itself in the violence that has been seen in other parts of the world.

One "worrying" trend that he has noticed, however, is the tendency of the domestic media to try to externalize the problem.

"There is a case involving a Korean student at a US university who came back to Korea and traveled with her mother around the island of Jeju before testing positive for the virus," he said.

"They are now being sued by the provincial government for 100 million won for losses to local businesses."

"What is worrying to me is that the Korean media is referring to her as a 'US-based student' as they try to put more of the blame on outsiders," he said.

Triage - the ethics of Corona