How Vietnam is winning its 'war' on coronavirus

A densely populated neighbor of China, Vietnam has a weak healthcare system and a low budget for combating the coronavirus. So how has it managed to keep its COVID-19 infection rate so low? 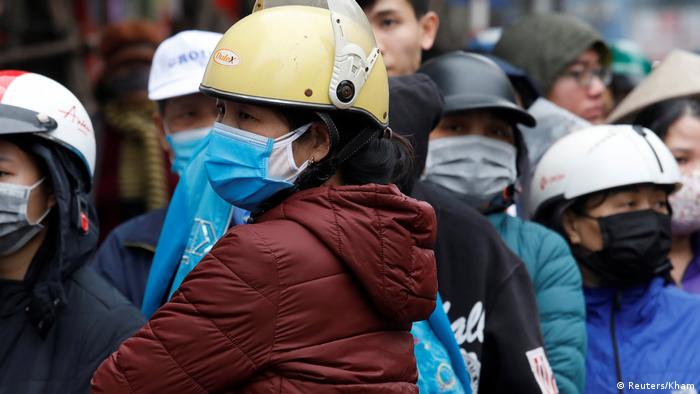 As the coronavirus pandemic rages in wealthy European countries, more than 10,000 kilometers (6,000 miles) from China where the outbreak began, Vietnam has widely been spared.

In Germany alone, the latest numbers from the Johns Hopkins University show over 134,000 people have been infected with the novel coronavirus, officially known as SARS-CoV-2, resulting in more than 3,800 fatalities. Vietnam, which shares a 1,100-kilometer-long border with China, however, has only reported 268 infections and no fatalities since the outbreak began in January.

Even if we consider these numbers with a dose of caution, one thing is clear: Vietnam has a done a good job thus far in fighting the coronavirus.

During the Tet New Year celebrations at the end of January, Vietnam's government said it was "declaring war" on the coronavirus, although the outbreak at that time was still confined to China. Premier Nguyen Xuan Phuc said during a meeting of Vietnam's ruling Communist Party that it would not be long before the coronavirus reached the country. "Fighting this epidemic, means fighting the enemy," said Phuc.

Mobilizing on all fronts

However, this fight will depend on a lot of government funding and a stout public health system, which are two things that Vietnam lacks.

Vietnam does not have the capacity to undertake a South Korea-style fight against coronavirus, which has so far involved carrying out 350,000 tests. The country's medical system is also limited. Nguyen Thanh Phong, the mayor of Ho Chi Minh City, a metropolis of 8 million people, said that the city's hospitals have a total of 900 intensive care beds. An epidemic in the city would easily overwhelm this capacity.

To take the fight to coronavirus, Vietnam instituted rigorous quarantine policies, and carried out complete tracing of all people who came in contact with the virus. These measures were implemented much earlier in the course of the epidemic than in China, where lockdowns of entire cities were used as a last resort to keep the virus from spreading further. 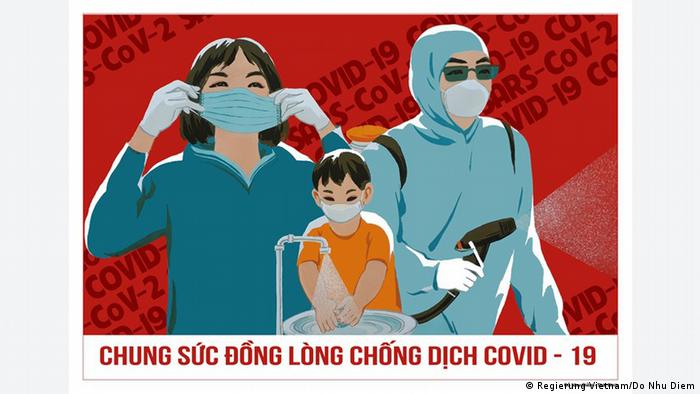 For example, on February 12, Vietnam put an entire town of 10,000 near Hanoi under quarantine for three weeks. At this time, there were only 10 confirmed COVID-19 cases in the entire country. Authorities also widely and meticulously documented anyone who potentially came in contact with the virus.

Western countries like Germany only documented those infected and their direct contacts. Vietnam also kept track of second, third and fourth levels of contact to infected persons. All of these people were then placed under successively stringent levels of movement and contact restrictions.

And from very early on, anyone arriving in Vietnam from a high-risk area would be quarantined for 14 days. All schools and universities have also been closed since the beginning of February.

Instead of depending on medicine and technology to prevent a coronavirus outbreak, Vietnam's already robust state security apparatus has applied a widespread system of public surveillance, helped along by a well-supplied, and generally respected, military.

Security officials or Communist Party spies can be found on every street and crossing in every neighborhood and in every village. The military is also deploying soldiers and materiel in the fight against coronavirus.

This close surveillance largely keeps anyone from slipping through the net or evading regulations.

But the downside of this is those who are sick with COVID-19 are ostracized in their community and on social media. One woman whose case went public in Vietnam brought the virus with her to Hanoi after traveling in Europe. She was widely insulted on social media for having ignored instructions like registering with authorities and remaining quarantined.

She was also a special case, because when she arrived, the first 16 people infected with COVID-19 in Vietnam had already recovered. She was considered as the person who brought the virus back.

This kind of ostracism for those who become sick creates a tremendous amount social pressure to submit to government regulations.

Vietnam is also applying a kind of war rhetoric in its fight against coronavirus. The premier has said: "Every business, every citizen, every residential area must be a fortress to prevent the epidemic."

This has hit a nerve with many Vietnamese, who are proud of their ability to stand together in a crisis and endure hardships.

State-controlled media have also launched a massive information campaign. The Health Ministry even sponsored a song on YouTube about proper hand-washing that has gone viral.

Although there are no studies to prove it, the mood on social media and conversations with Vietnamese indicate that the majority of the public agrees with the government measures.

They are proud that Vietnam is faring comparatively well in meeting the crisis. The country's most popular coronavirus fighter, vice Premier Vu Duc Dam, has been celebrated on Facebook as a "national hero." 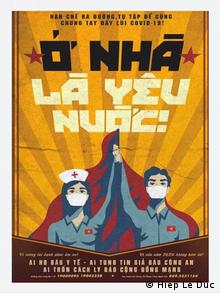 There are few people who are bothered by the fact that this success gives a political advantage to Vietnam's one-party Communist government, which is accused of violating civil rights. People are also accepting stricter control of the media.

The projected economic costs, which will hit Vietnam hard despite the low case numbers, have also been widely accepted by the population.

According to government figures, 3,000 businesses have closed in the first two months of 2020. Big conglomerates like the Vin Group have shuttered dozens of hotels and resorts due to the drop in tourism, costing employees their jobs.

To ease the burden, Vietnam's government has made $1.1 billion (€1 billion) available to pump liquidity into the economy. However, finance officials expect that tax revenues will dry up because of the crisis. The government is also calling for voluntary donations — and people are giving what they can because they believe in their government during this crisis and in the fight against coronavirus.

Germany's alleged attempt to fly in Filipino nurses to provide assistance to COVID-19 patients has irked many in the Philippines. The country is facing a shortage of health workers as it tries to combat the disease. (26.03.2020)

Despite its proximity to China, Japan hasn't seen the massive outbreak of the coronavirus that has shut down much of Europe and North America. What are the Japanese doing differently to help slow the spread? (25.03.2020)