Despite its proximity to China, Japan hasn't seen the massive outbreak of the coronavirus that has shut down much of Europe and North America. What are the Japanese doing differently to help slow the spread? 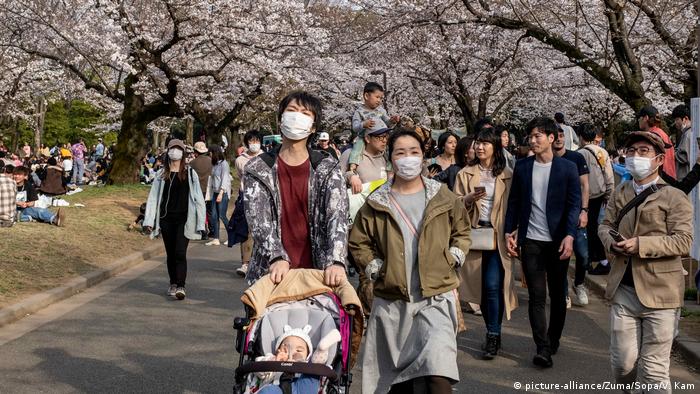 Coronavirus concerns weren't on the mind of the many people enjoying Japan's famed cherry blossoms this past weekend. Thousands of people sat under the pink splendor in parks and along avenues, eating their packed lunches, drinking beer and snapping selfies with the budding blossoms.

"Hanami, the flower show, is the most important event of the year for us Japanese," said an employee at Ueno Park in Tokyo.

The contrast to Europe could hardly be greater. Japan so far has 10 outbreak clusters, with close to 1,200 confirmed cases and 43 deaths to the coronavirus as of March 24. Only a few dozen new infections are reported every day. These figures should have exploded — after all, Japan is very densely populated, with the world's highest density of senior citizens. And it's in close contact with nearby China, where the disease originated: in January, some 925,000 Chinese people traveled t to Japan, while another 89,000 made the trip in February.

Responding to the coronavirus pandemic, the Japanese government closed all schools two weeks before the spring holidays at the end of March and canceled all public events. But shops and restaurants could remain open, and few Japanese employees decided to work from home. 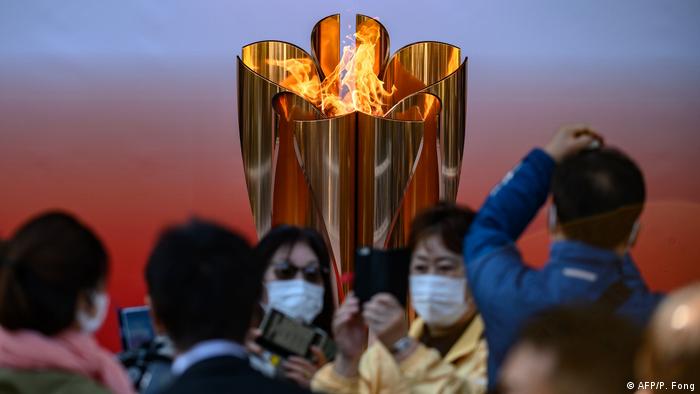 The 2020 Olympic Games were postponed for one year

The low numbers of confirmed COVID-19 cases in Japan initially aroused suspicion that the government was covering up the truth.

"After the Fukushima nuclear disaster [in 2011], the government initially refused to admit the reactor meltdowns," said Barbara Holthus, a sociologist with the German Institute for Japanese Studies in Tokyo. "Today, there remains a great distrust of official statements."

Despite having the capacity to make 6,000 diagnostic tests per day, Japan has only tested around 14,000 swabs to date — 20 times fewer than neighboring South Korea, which has been hit hard by the pandemic. Only patients with the most severe symptoms are tested, said Masahiro Kami, a virologist at the Medical Governance Research Institute. That, he added, means the number of unreported cases is very high.

Experts at the Health Ministry have repeatedly rejected such criticism, saying they were looking for spikes in COVID-19 cases in order to contain the virus, rather than conducting widespread tests. When the epidemic broke out in a primary school on the northern island of Hokkaido, for example, authorities closed all schools in the prefecture and declared a state of emergency. After three weeks the spread of the virus had been stopped.

"The low number of tests was intended to ensure that health care resources remained available for serious cases of infection," Sebastian Maslow, a German political scientist at the University of Tokyo, told DW.

Masks 'a part of our everyday lives'

Japanese greeting etiquette — a bow instead of a handshake or a kiss on the cheek — has also played a part in slowing the outbreak, as has basic hygiene education taught from an early age.

"Washing our hands, gargling with a disinfectant solution and wearing masks are part of our everyday lives. We don't need coronavirus to teach us that," said a Japanese mother of two. As a result, it was easy for society to switch to anti-infection mode in February when the virus first began to spread. Shops and businesses set up hand sanitizers at the entrance, and it became a civic duty to wear a face mask. 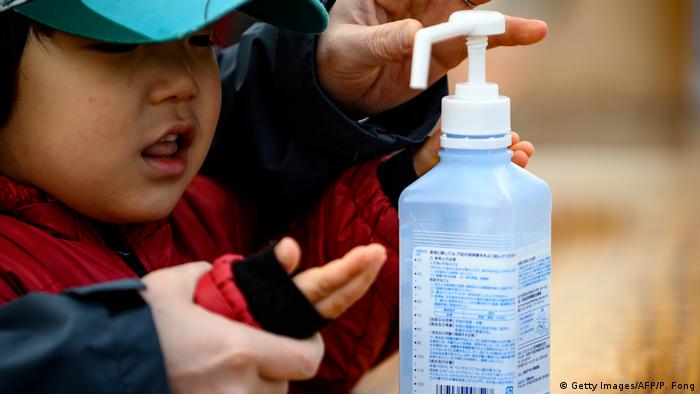 The country typically goes through 5.5 billion face masks every year — 43 per person. Sales of face masks skyrocketed as the virus took hold. Masks have been rationed, and people stand patiently in line waiting for shops to open. Other shops sell strips of fabric and coffee filters, along with instructions for DIY versions.

The Japanese appear to have understood that a person can be infected without showing symptoms, said Michael Paumen, a German business manager who has lived in Japan for many years: "You put the mask on to protect others, so you yourself don't transmit viruses."

The widespread use of face masks appears to have slowed down the spread of not just COVID-19, as indicated by the sharp drop in the number of flu patients in the seven weeks since the outbreak of the coronavirus. A recent study by five Western physicians, including Fabian Svara from the Caesar research group in Bonn and Matthias Samwald from the Medical University in Vienna, found that masks "decrease the transmission of droplets or aerosols containing viral particles by mask wearers."

Apart from social distancing and hand-washing, the experts concluded that face masks could play an important role in slowing down the spread of the virus, pointing out the low infection rates in Japan.

In view of this success, Abe last week refrained from declaring a national state of emergency. Since then, the Japanese have slowly been returning to their everyday lives. Tutoring schools are back in operation, with the children sitting apart from each other in well-ventilated rooms. Amusement parks have reopened, but people running a fever are asked to stay away.

Fearing a second wave of infections, the government has said that, for the time being, only schools in areas without COVID-19 patients will be allowed to open at the beginning of the new school semester in April. A ban remains prohibiting large public events.

Foreign visitors, however, remain a threat according to health authorities, with South Koreans and EU citizens barred from entering the country. Foreigners who live in Japan are allowed to return but must remain in quarantine for 14 days upon arrival. According to unofficial information, the measures will remain in place until at least the end of April.