Coronavirus: South Asia sees rise in poaching during lockdowns | Asia | An in-depth look at news from across the continent | DW | 08.07.2020

Lockdown restrictions in places like India, Pakistan and Nepal have forced many to turn to poaching of wild animals and illegal animal trade for sustenance and as a source of income. Tanika Godbole reports. 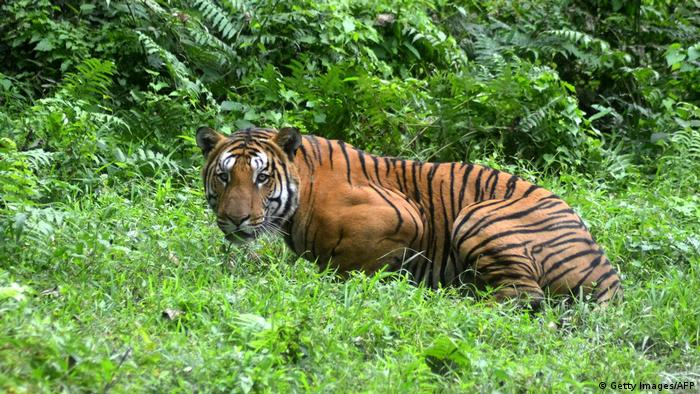 Over the past few months, South Asian nations have enforced lockdowns to varying degrees to combat the rapid spread of the novel coronavirus. During this period, forest authorities in India, Nepal and Pakistan have reported a sharp rise in poaching cases.

The trend follows similar observations in Africa and South America, where deforestation and illegal hunting of animals have increased since the imposition of coronavirus lockdowns.

While poaching and illegal animal trading are not a new phenomenon, the COVID-19 health emergency has exacerbated the problem.

In South Asia, Bangladesh remains an exception, being the only country in the region that reported a decline in poaching incidents.

In April and May, Pakistan and Nepal reported an increase in the poaching of birds and endangered species. In Pakistan, 65 demoiselle cranes were found bound and hooded in the back of an ambulance driving to Peshawar.

Local forest officials in Baluchistan province said the poaching of birds had gone up since the region was a key resting point for migratory birds flying back to Siberia from India.

Despite authorities' efforts to curb illegal animal hunting and trade, poaching remains a lucrative business in the region. And as governments focused on enforcing lockdown restrictions, criminals involved in the illegal wildlife trade took advantage of the situation and intensified their activities.

Furthermore, the economic costs imposed by the lockdowns also pushed some people to resort to poaching to support themselves, say observers.

In Nepal, six musk deer were found in the Sangarmatha National Park, in what was one of the worst instances of poaching.

In India, authorities recorded a rise in poaching incidents in many parts of the country. The cases involve the illegal hunting of wild birds and animals like leopards, desert antelopes and rhinos. In May, a greater one-horned rhino was gunned down in the Kaziranga National Park, in northeastern India.

Sometimes, poachers pay financially disadvantaged local families to help them. "With people losing work, they [poachers] will definitely take advantage of this," said Uttara Saikia, a wildlife warden at Kaziranga.

Officials also believe that people's loss of incomes during the lockdowns may have also contributed to the surge in the clandestine wildlife trade. Compounding the problem is the massive urban-to-rural migration of people who have lost their jobs in the cities. Experts say these people are being forced to rely on poaching and other illegal animal trading activities for their livelihood.

"More than big mammals, it is the poaching of animals for bushmeat that has gone up," Latika Nath, author and wildlife conservationist, told DW.

The human encroachment on wildlife habitats is also expected to have a negative effect on people's wellbeing.

"There is a risk of zoonotic diseases spreading through these animals, especially the ones being used for meat. The more you tamper with nature, the more chances there are of spreading diseases," Nath said.

Coronavirus: A new way of life for India's elderly

As India struggles to deal with the coronavirus pandemic, small moments of happiness often get overlooked. For 80-year-old Shashi Luthra, getting stuck in Delhi meant rediscovering her connection with her elder sister. (06.07.2020)

How denial and conspiracy theories fuel coronavirus crisis in Pakistan

The coronavirus is spreading at an enormous pace in Pakistan. Analysts say the government's inaction and mismanagement of the virus has worsened the outbreak. (23.06.2020)

Bhutan, a small nation in the Himalayas, has successfully averted the COVID-19 crisis — at least for now. With no reported coronavirus-related fatalities, the country contained the pandemic despite limited resources. (10.06.2020)