Politicians have backed recommendations by top virologist Christian Drosten for quarantine in suspected COVID-19 cluster cases to be reduced to five days. They hope the measure would then find greater social acceptance. 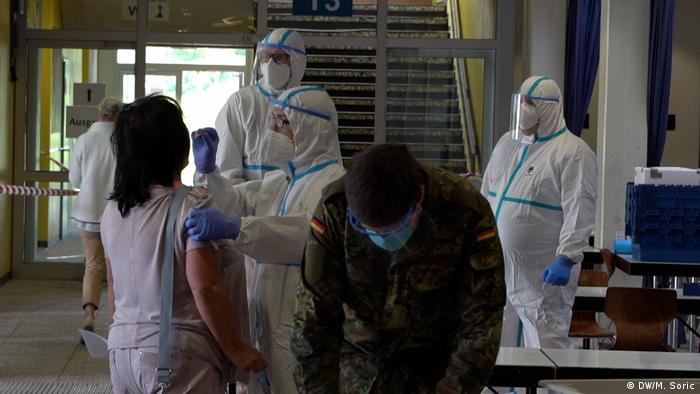 Lawmakers from across Germany's political spectrum are calling for a reduction in the quarantine period for suspected coronavirus cases to just five days.

The self-isolation time for people at risk of COVID-19 infection through cluster contact is currently 14 days.

Calls for a rethink come after leading virologist Christian Drosten — who has been credited with much of Germany's success in tracking and tracing the virus — recommended a shorter period. He said evidence suggested the virus would not be infectious five days after symptoms became apparent.

Emerging scientific evidence has made a rethink on the rules necessary, according to Karl Lauterbach, health spokesman for Germany's Social Democrats (SPD) — the junior coalition partner to Chancellor Angela Merkel's conservatives.

"If we limit the quarantine time to five days, social acceptance for the measure would be significantly higher," Lauterbach told German daily Die Welt.

"We know that the vast majority of people are no longer contagious five days after the start of symptoms, even if the PCR test is still showing a positive result," said Lauterbach, who is also a professor of health economics and epidemiology at the University of Cologne. The presence of the virus does not necessarily mean the patient is infectious.

Lauterbach added that such a change could initially appear difficult to justify. "But, if scientific knowledge makes a change in the measures seem sensible, you have to do it," he said.

"For the broad mass of the population, it could be sensible to initially go into a shortened quarantine when there is a suspicion that there has been contact with an infected person, and to conclude this with a negative test," she said.

Detlev Spangenberg, health spokesman for the far-right Alternative for Germany (AfD), said Drosten's comments supported his party's position that the existing measures were "hasty and not applied in a balanced way."

Read more: Most in Germany back Berlin's coronavirus response

The health policy spokeswoman for Merkel's conservatives, Karin Maag, said a study was currently underway by both Germany's health ministry and the Robert Koch Institute, the country's public health agency.

The aim, she said, was to "evaluate the existing situation on quarantine and then, in communication with European partners, to submit a report." The result could lead to a shortening of quarantine, Maag added.

In a podcast by German broadcaster NDR, virologist Drosten on Tuesday repeated an earlier recommendation that the quarantine period might be shortened.

Drosten said such a reduction was at the "pain threshold" of what was acceptable in disease control terms, but that it might garner more public support for coronavirus measures.

He said the patients could be tested after five days to see not only if they were positive for the virus, but also if they were infectious.

German Health Minister Jens Spahn is holding a video conference with his counterparts from EU states Friday. The ministers will discuss the potetnial for a Europe-wide ruling on quarantine.