Coronavirus: India′s insistence on holding exams torments students | Asia | An in-depth look at news from across the continent | DW | 16.09.2020

Authorities are holding final year exams despite students' protests. A worsening coronavirus crisis in the country has put the students' lives at risk, with many of them having to travel to other cities to take exams. 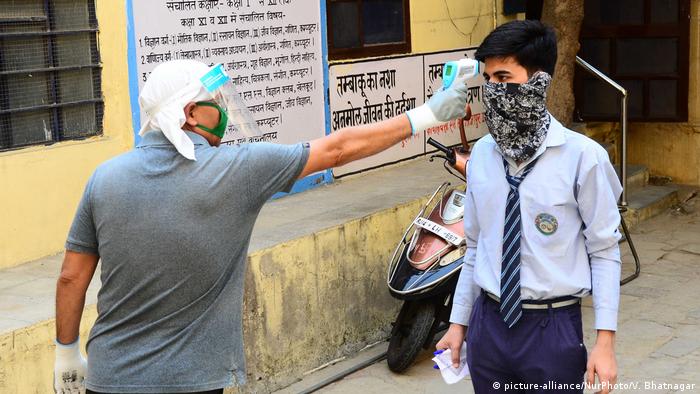 As the daily coronavirus caseload in India moves closer to 100,000, over 1.5 million students took one of the country's most competitive exams on Sunday amid protests and court petitions.

"In Bihar state, around 78,000 students were supposed to appear for the NEET and the examination centers were only in two districts. I had to travel 140 kilometers (87 miles) one way to reach it," Aman Singh, a NEET candidate, told DW.

Several students told DW that distance would not have been a problem under normal circumstances, as they could have traveled a day before the exam and stayed in hotels. But the situation is different this year.

"My parents were worried that I could contract COVID-19 if I stayed in a hotel. I spent a lot of time and money preparing for the exam so I couldn't afford to miss it, but I didn't want to infect my parents either. Thy have health issues," Sneha Kumar (name changed) from Bihar told DW.

Exams in India amid rising COVID cases cause concern

The federal education ministry's National Testing Agency (NTA) refused to postpone exams, saying they had already been delayed during the coronavirus lockdown and must be taken now.

The NTA laid out extensive safety guidelines, including temperatures checks and sanitization of examination centers. However, reports of overcrowding and violation of social distancing measures in earlier state-level exams worried students.

As of Wednesday, India has recorded over 5 million coronavirus cases and more than 82,000 related deaths. The South Asian country is behind only the US in overall COVID-19 infections.

The first petition filed by 11 students in the Supreme Court, seeking deferment of the two exams, was dismissed on August 17, with the court saying "career of students cannot be put in jeopardy for long."

Following the dismissal of the students' petition, six opposition-ruled state governments said they would not be able to implement Standard Operating Procedures for coronavirus during the exams. The states filed a review petition in the apex court, which was also turned down.

"It was crucial that states admitted they were unprepared. Still the court dismissed the second round of NEET, JEE petitions," Alakh Alok Srivastava, one of the lawyers representing the students, told DW.

The JEE was held from September 1-6, while a fresh round of NEET petitions were rejected last week.

In Tamil Nadu state, four NEET candidates reportedly took their lives in the week leading up to the exam. The southern state was among those demanding an exemption from NEET due to the pandemic.

"Students from all sections of society take these exams. Many students from rural areas don't have enough resources," Singh said. "But we don't have a choice. It doesn't matter if we are mentally prepared or not, or even if we risk our lives. For students from middle or lower-middle classes, everything depends on these exams."

Many Indian universities are now conducting their final year exams after several postponements. The students can take these exams online also.

Gaurisha Kapila, a Bachelor's degree student at Delhi University, said she took her exams while suffering from coronavirus.

"I was already under a lot of pressure before I tested positive. I was rejected by two employers despite being selected initially, as I did not have a degree. There was uncertainty over when we would get our degrees as the exams were being delayed again and again," Kapila told DW.

How is the start of the school year going around the world?

Her mother lost her job back in March because of the pandemic. Kapila says a lot was riding on her as the family was going through financial problems.

"After testing positive, I learnt that the university was considering conducting exams. I couldn't miss it. I was very sick at the time. I had difficulty breathing and at the same time I had to study for exams," Kapila said.

Singh said the students were expected to be mentally strong in these circumstances.

"Authorities said we should be mentally strong because we are going to be future doctors. But the reality is that we are just students who are taking an entrance exam," Singh said.

The Indian government has scaled down this year's independence festivities due to rising coronavirus cases in the country. The South Asian country's future depends on its response to the pandemic.