How Indian police contained coronavirus in Mumbai | Asia | An in-depth look at news from across the continent | DW | 03.09.2020 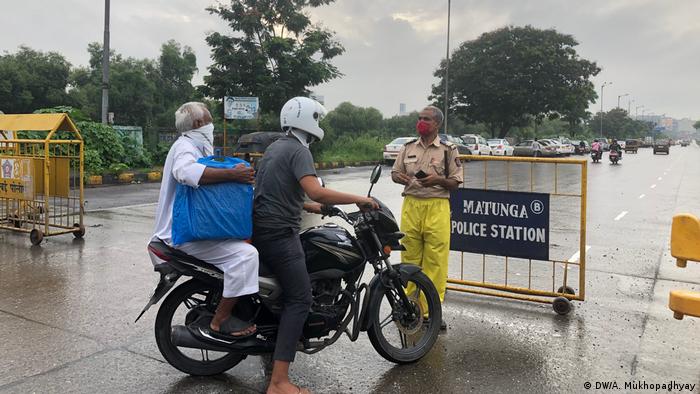 Laxman Kanojia, a young police officer in the city of Mumbai, struggles to put on his personal protective equipment (PPE) kit before heading to a "fever camp" in the city.

Despite working at the front line, Kanojia looks calm. "Most of the storm has passed now. The virus doesn't scare us anymore," he told DW.

Kanojia works with Mumbai's Railway police, but he has been assigned to COVID-19 camps since the start of the pandemic.

The Brihanmumbai Municipal Corporation (BMC), Mumbai's main municipal authority, has set up camps in various residential areas and slums to trace COVID-19 patients. People who experience fever symptoms are directed to the camps.

Police on the front line

Kanojia and his colleagues stand guard at some of the camps and ask people to maintain social distancing. Sometimes, they fill in as volunteers and distribute medicine. The officers are only given PPE when they have to assist doctors.

"We only use PPE kits when we deal with positive patients, otherwise our uniform is our PPE," Ramesh Nangre, a senior police inspector at the Dharavi slum police station, told DW.

According to Nangre, around 50 police officers at his police station have tested positive for COVID-19, while one has died from the virus. Overall, around 1,233 of Mumbai's 1,800 police personnel (including reserve forces) had contracted and recovered from the coronavirus by June.

At times, Kanojia fears for his family. "I am very proud when I go out for work because I am useful to people. But I am also scared, because afterwards I have to wear this same uniform and go home and meet my family members," he said. 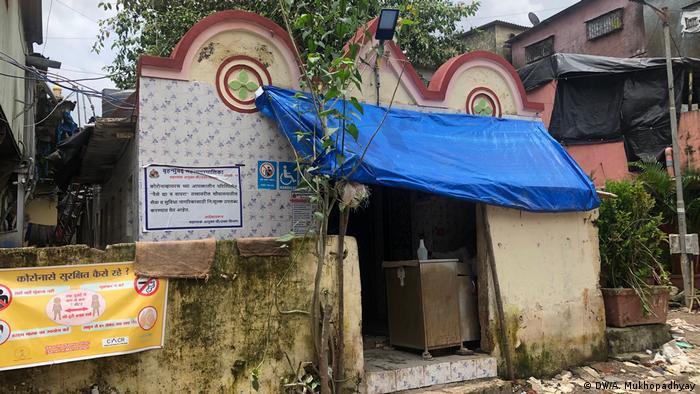 A public toilet in Dharavi

The biggest challenge for the authorities was containing the coronavirus outbreak in Dharavi, one of Asia's largest slums. With a population density of 354,167 people per square kilometer, the virus spread at a rapid pace there.

Mumbai authorities converted the Dharavi police station into a food and information dissemination center. Police officers were also responsible for ensuring that people stayed inside their homes.

As the majority of Dharavi residents don't have toilets inside their homes, Nangre said his team requested the BMC to clean the slum's public washrooms at least twice a day and make sure people use sanitizer before and after using the washroom.

In the beginning, police also organized flag marches within the slum to not only motivate officers but also discourage people from leaving their homes.

Nangre said he recorded an audio clip about COVID-19 symptoms and how it can spread. "We collaborated with 30 mosque clerics as soon as the outbreak happened and told them about the coronavirus. They played the audio clip in every mosque. We urged people to pray at home and wear masks," he said.

The coronavirus outbreak in Dharavi took four months to be contained. On August 11, Dharavi reported eight new cases over 24 hours.

For N. Ramachandran, president of the Indian Police Foundation, a New Delhi-based think tank, Dharavi's "success" was due to decentralized policy implementation.

"The officer of the municipality, the health workers and the local police officials were committed to contact tracing and quarantining the infected people," Ramachandran told DW.

Not everyone in Dharavi welcomed the slum's heightened police presence.

"The cops beat so many of us intentionally. They even broke the hand of a teenager who was simply sitting outside his home," a local craftsman, who requested to remain anonymous, told DW, adding that police continue to use violence to enforce coronavirus measures.

In an attempt to contain the virus in the initial days of the country's lockdown,India invoked Section 144 of the Indian Penal Code (IPC), which prohibits the assembly of four or more people. Anyone violating section 144 could be arrested and detained by the police. However, the government hadn't authorized the police to use force to implement the lockdown.

"If the person cooperates with us, we don't have to beat them up. It's not our hobby to beat up people. The police don't hit anyone intentionally. If we ever do, it is for their safety," said Kanojia.

"In April, some people in Dharavi pelted stones at the police. They even attacked doctors trying to distribute kits," he added.

But some Dharavi residents say that police officials are using the pandemic to target the slum's Muslim community.