Sex workers in India find new ways to earn amid coronavirus pandemic | Asia | An in-depth look at news from across the continent | DW | 11.08.2020 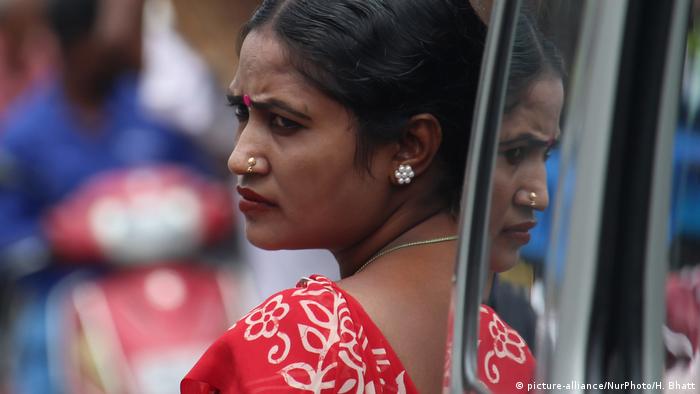 When India entered its first lockdown on March 25 to contain the spread of the novel coronavirus, hundreds of thousands of sex workers across the country were cut off from their major source of income.

Even as help slowly trickled in, it was difficult for many of them to find a way to make ends meet.

"Until the end of June, there was no dhanda [a colloquial term meaning 'business'] for the sex workers. In Mumbai, the police vigilance was so strong that there was no activity in the brothels of Kamathipura," Priti Patkar, co-founder and director of the NGO Prerana Anti-Trafficking, Mumbai, told DW.

"While there was relief in the form of food grains and utilities, this did not help the women with their rent and debt payments," she said.

Read more: Street crime and cyberfraud are on the rise in India during the pandemic

Since the start of the pandemic, authorities have been providing aid in the form of essential food commodities to economically underprivileged citizens, including sex workers.

"However, the government only provides for those who are able to produce ration cards. More than 50% of sex workers across India do not have ration cards, or any such documentation," Smarajit Jana, chief adviser to the Durbar Mahila Samanwaya Committee, told DW.

The DMSC, which represents more than 65,000 sex workers, has been working to provide essential food items, sanitary napkins and other necessities to sex workers. The collective operates in Sonagachi, Kolkata, Asia's largest red-light district.

Adapting to the pandemic

With the lockdowns in place, sex workers found it almost impossible to work. As India began to loosen restrictions in May, activity returned to the red-light districts as well.

"We have been doing temperature checks and screening customers for symptoms when they enter the district. We also sanitize the room before and after the customers leave," Kajol Bose, a sex worker and the DMSC's secretary, told DW.

"Some of the higher-class-category sex workers have been able to earn with the use of phone and internet sex. But this is not an option for all of us," Bose said.

Read more: Is the Kerala model in India really working during the pandemic?

Prerana's Patkar said phone sex, though a better option in terms of physical distancing, may not be viable for the most vulnerable. "It is an option for those who cater to the middle- and high-income clientele," she said. "But lower-income sex workers do not have the necessary skills, space, and connections for this."

Patkar said a few sex workers had been able to find alternatives to their profession to earn a living. The NGO was able to organize grants for a few women to set up microbusinesses, such as stores for selling dry fish, onions and potatoes, or tea stalls.

The women of DMSC have been employed in making masks and sanitizers, which have been used by the community themselves. "In the coming days, we're also going to start producing PPE kits. As we increase our production, we are planning to sell all these items in the future," the DMSC adviser Jana said.

Sex workers are among the people most severely affected by the pandemic.

Food supplies and donations have not been able to supplement their needs. Many of them have been struggling to meet their financial needs, such as paying rent and school fees for their children.

"Some of them also had to face harassment and violence from their brothel keepers," Patkar said.

Though many migrant workers and daily-wage laborers chose to go back to their hometowns, a lot of sex workers didn't have that option.

Sex workers face massive discrimination in the South Asian country, and there's a lot of social stigma attached to the profession. Sex workers are also often trafficked to big cities.

Cities such as Mumbai and Kolkata have the highest number of cases of women and child trafficking, according to the National Crime Records Bureau. "Going back to the village? That's not an option for me. I am not wanted there. I have to find another option for a livelihood. Give me any other job and ask me to learn anything," said Mira, from Mumbai's Kamathipura district.