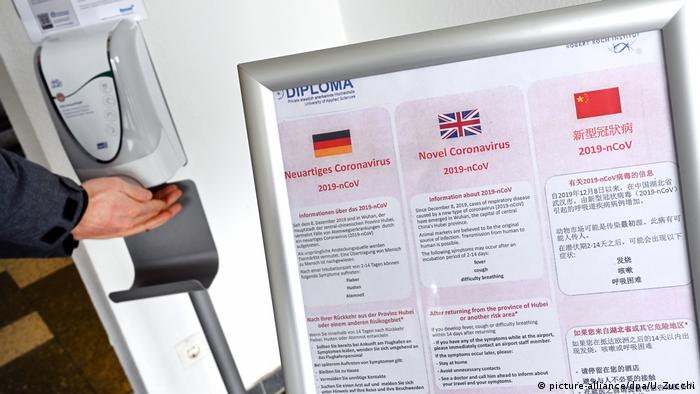 The German government has announced that it is creating a new crisis team in order to vigorously combat the spread of COVID-19. The president of Germany's Robert Koch Institute (RKI), the country's infectious disease prevention organization, said Thursday that he believes the new coronavirus could prove more deadly to Germans than the flu.

Lothar Wieler said he didn't know yet how high the mortality rate in Germany could be but added that there would be daily press briefings about the state of the country's containment efforts for the forseeable future.

Wieler noted, however, that there was still no reason to panic: "It is not out of control yet. We had an incident in Bavaria, which has been successfully contained. Then we had two new cases two days ago, and the health authorities are trying to trace that."

Announcing the creation of the crisis team, Health Minister Jens Spahn added on Thursday that the government "takes the outbreak of the coronavirus seriously and we will respond to each new situation in which Germany, Europe and the whole world find themselves in."

Intially, some employees of a company in Bavaria with links to China were the only people affected. More recently, isolated cases have sprung up in the states of Baden-Württemberg and North Rhine-Westphalia.

For the RKI, however, the procedure remains the same: Isolate the infected patients and try to identify anyone they may have come into contact with.

"We will continue to pursue this strategy," Wieler said. "Although a new outbreak may come that we cannot control."

However, scientists at the RKI said they still believe that it would not be helpful to put cities in Germany on lockdown.

Germany has an Infection Protection Act that regulates what should and can happen in the event of an infectious disease outbreak. In practice, protection against health hazards and action in the event of a disaster are national matters in Germany, but each federal state also has its own plans for epidemics or pandemics. As a rule, the following applies: As long as outbreaks of infection appear manageable with conventional means, no catastrophe-level alarm is triggered.

Germany's 16 federal states have plenty of statutes on the books to protect people from emergencies, but so far all of them are remote possibilties.

For example, Brandenburg's law states that disaster protection measures will be implemented when infections "impair or endanger the life or health of a large number of people, substantial property, essential accommodations or the basic supplies of the population, and at the same time cause significant disruptions or cause immediate threats to public security or order." Therefore, a large set of criteria have to be met before such a law goes into effect.

However, authorities do have the power to conduct health checks if they believe the public health is at risk, including on a bus or a train, and they can also unilaterally cancel public events. For example, schools and kindergartens have already been closed in parts of North Rhine-Westphalia in response to the latest case.

It is nearly impossible to completely close a major city in Germany, as has been done in China, but entry bans for people from affected areas are possible as is prohibiting someone from leaving or entering a specific place.

Not so easy to deploy the army

A unique aspect of disaster response in Germany is that it is very difficult to deploy the Bundeswehr inside the country's borders. Many Germans might remember soldiers helping pile up sandbags to help stem flooding on the Oder and Elbe rivers, but there are very narrow limits to the use of soldiers in response to an epidemic.

Carrying out emergency checks, making arrests, or ordering closures of public premises still resides solely with the police inside Germany.