Coronavirus: Germans go back to church — but no singing allowed

Churches across Germany are holding services for the first time in six weeks as the country begins to ease coronavirus restrictions. Members of the congregation must wear masks, stay apart and no singing is permitted. 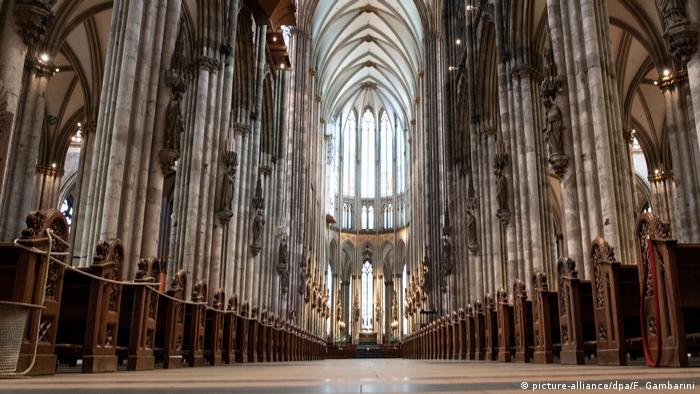 Many German churches reopened on Sunday morning after most remained closed for more than a month in an effort to curb the spread of coronavirus.

Worshippers will have to wear masks, respect social distancing, and no singing will be allowed amid fears that it spreads the virus more easily.

Cologne Cathedral, Europe's largest church and Germany's most visited landmark, has planned a special ceremony for friends of the church. Workers, choir members, lay readers and altar boys were invited to a ceremony of only 122 people in the enormous medieval cathedral which normally received 20,000 visitors a day.

As well as extra hygiene requirements, people must abide by the social distancing regulations that require members of the congregation to sit in designated seats 1.5 meters apart. All physical contact is forbidden, doing away with the traditional "well-wishing" handshake that makes up part of the Catholic ceremony.

To receive communion, floor markings have been laid out to avoid people coming too close to each other.

From Wednesday onward, Cologne Cathedral will hold public services once more, but the number of congregation members will remain at 122.

German Chancellor Angela Merkel announced earlier in the week that churches, zoos, museums and children's playgrounds will slowly be allowed to reopen after over a month of nationwide restrictions.

While some remain skeptical about a possible negative effect on the infection rate of church's reopening, many top religious figures welcomed the move.

This is a "positive sign for the faithful that religious freedom and infection prevention can work together in harmony," said Prelate Karl Justen of the German Catholic Church.

Mosques in Germany will hold their first public prayers on May 9. Muslims in Germany are currently fasting during the holy month of Ramadan, a time of year usually marked by frequent visits to the mosque and public meetings with friends and families.

Two courts have dismissed bids by churchgoers to overturn bans on gatherings during the pandemic — including for Easter services. Catholic and Protestant leaders are urging congregants to stay "responsibly" in isolation. (07.04.2020)

With Germany in lockdown, pastors and priests are looking for new ways to reach the country's 3 million regular worshippers. Elderly churchgoers are especially in need of pastoral care. (29.03.2020)

There is increasing dissent against social distancing rules, which had previously had broad public backing. That could have fatal consequences, writes DW's Martin Muno. (30.04.2020)