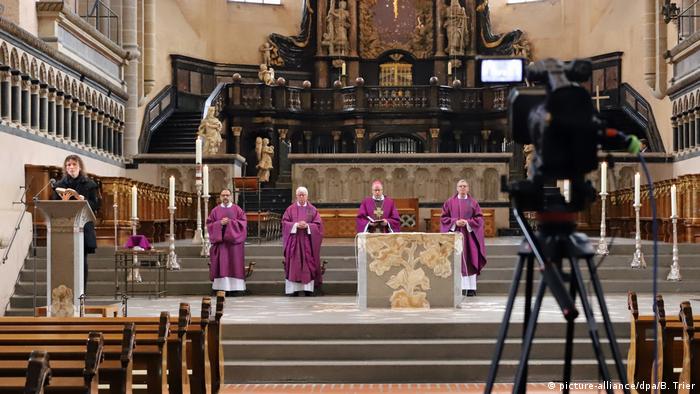 "We were overwhelmed, at all levels," said Selma Dorn, a vicar at the Evangelical Reformed Church in Leipzig. "Pastoral care happens on all levels, with every conversation."

The 29-year-old, like much of Germany's religious community, has been struggling to adapt to life under lockdown in Germany, with churches and other religious institutions closed to help stop the spread of the COVID-19 outbreak.

Dorn heard about the new restrictions on everyday life just ahead of a regular women's coffee meetup, where 10 of the usual participants were over 75 years old. "We struggled for a long time over the decision to cancel the meeting," she told DW.

But in the end, the meeting was called off, and Dorn began making the calls. Some of the conversations lasted just a few minutes, while others went on for an hour. For some of the women, the meetup is the only time they have contact with the outside world, "a fixed point" in their life, said Dorn.

'Daily church life has been suspended'

Since that day two weeks ago, the phone has been Dorn's most important tool, as it has been for thousands of other religious leaders.

"Our previous routine, the daily church life, has been suspended," said Christoph Wichmann, a Catholic priest in the western city of Oberhausen near Düsseldorf.

Inside Europe: Greek Orthodox Church weighs in on coronavirus

Instead of celebrating Mass, working with youth or meeting with various associations, now most days are spent on the phone and "answering 25 to 30 emails a day."

Wichmann usually celebrates Mass at St. Pankratius every day. Of the two or three dozen faithful in attendance, a good half are elderly. It's only recently become clear to Wichmann that he may not see some of them alive again.

But he continues to connect by phone, speaking and praying with his parishioners. And every evening at 7 p.m., he places a lit candle in his window at home and says the Lord's Prayer.

Many communities now ring the church bells every day, send out newsletters or postcards, encourage volunteers to shop for the elderly and organize phone chains to fight off loneliness.

Read more: How Germany's fight against coronavirus excludes the deaf

Live online singalongs are becoming a popular way to connect, and religious leaders everywhere are streaming their services on Facebook, Twitter or Instagram — among them Pope Francis, Cardinal Christoph Schönborn in Vienna and Cologne's archbishop, Rainer Maria Woelki.

But, said Wichmann, "many parishioners have also asked for something more personal." Online services are well and good, "but people also want to see their own familiar church, hear the bells, listen to the priest they know. That is incredibly important," he said. In response, the four Catholic parishes in Oberhausen have each decided to alternately broadcast one Mass every Saturday evening. 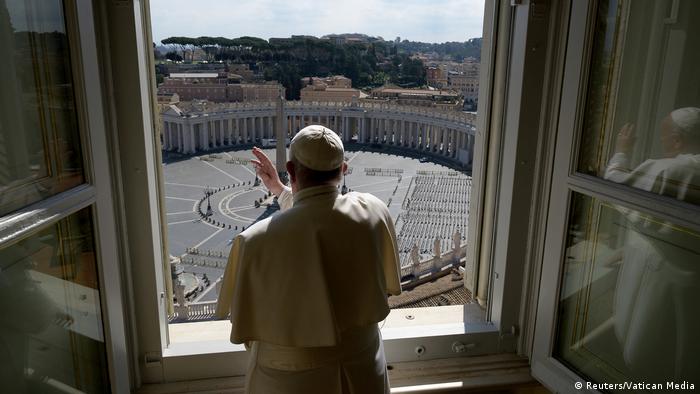 Pope Francis has been delivering his weekly Angelus prayer via video

Thomas Gäng, chairman of the Oberhausen Catholic Council, relies on these online services; he's been in quarantine after contact with an infected person.

"What I've missed was the celebration of the Eucharist. I really felt that void," he said. For Gäng, participating in Mass feels "as if Jesus Christ is hugging me. That's why going without the Eucharist is so difficult."

But he appreciates the new signs of faith: the candles in the windows, the online worship services from the Oberhausen parishes. And he's amazed that they've already racked more than a thousand views on Facebook and YouTube.

In Leipzig, Selma Dorn has also been turning her attention to social media: Instagram stories for the younger crowd, Facebook for the 30 to 60-year-olds. But for her and Wichmann, the phone remains a crucial link to their elderly members.

"Many have asked me to bring them a palm branch from Palm Sunday, or for a small Easter candle," said Wichmann. "Somehow, we'll find a way to bring it to them."

Germany is an established democracy. However, in an emergency there may be significant incursions into basic rights. An overview of the complex legal situation in Germany. (19.03.2020)