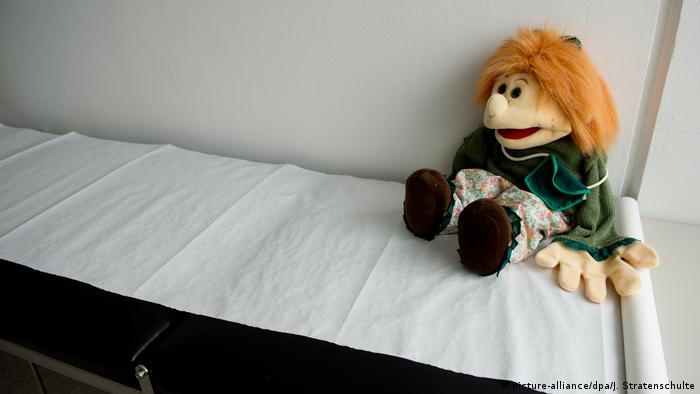 For many children, school is a place of learning and socializing. For others, however, it is a safe place — a refuge from unsafe home environments where they face the threat of child abuse.

According to police figures, more than 4,000 cases of child abuse were reported in 2018. The number of child sex abuse cases was significantly higher at more than 14,000.

Now, with schools closed as part of Germany's measures to limit the spread of the coronavirus, and many children out of sight, child protection organizations have warned of a potential increase in child abuse.

Chief executive of the German Children's Association (Deutscher Kinderverein), Rainer Rettinger, says the situation for some children could become life-threatening.

"Close confines and not being able to avoid each other adds to potential conflict and increases aggressiveness," says Rettinger, adding that children with parents suffering from addiction should be a particular focus.

With many support groups and youth services practicing social distancing, child protection agencies are demanding an increase in support on digital platforms, including social media, to keep children and families well-informed of the help that's available.

"Children must also be addressed and included in information," says Stefanie Fried from Save the Children Deutschland. "At the moment, children are mainly informed via adults, but those most vulnerable might not be receiving the correct information — especially now that they're no longer in schools."

While supporting the German government's measures to encourage social distancing, Fried also warned against the long-term difficulties for all families of staying indoors for weeks on end.

"We mustn't forget that children aren't adults, they need the room to move, and let off steam. These measures can be upheld for a short while, but then the state needs to reintroduce some kinds of recreational possibilities for families in the fresh air."

To the point - Corona: How Should We Handle this Crisis?

Shelters and counseling centers also fear that domestic and sexual violence among adults will increase significantly in the coming weeks as more people work from home. Others face being made redundant or have already been let go due to the economic repercussions of coronavirus — adding to stressful circumstances in the home.

Similar trends have already been reported in China where in some places, the number of domestic abuse cases was three times as high as usual after weeks of strict isolation measures.

"Under the current measures in place in Germany, the violent partner is less likely to leave the apartment, making it almost impossible for victims to reach out and call advice centers," Katja Grieger from the Federal Association of Women's Counselling and Rape Crisis Centers (bff) told DW.

Read more: Blood in the time of corona: Why donations are needed more than ever

Personal visits from support networks and social services are also being reduced over fears of spreading the COVID-19 virus.

"This is why we're calling on neighbors to be extra aware of possible cases of domestic violence," Grieger says. "If you hear loud shouts or cries in neighboring apartments, call the police."

If stricter curfews are implemented, the situation will become even more severe — effectively trapping victims of domestic violence with their abuser.

The German Ministry for Family, Senior Citizens, Women and Youth (BMFSFJ) says it has the problems "on the radar." But the issue of domestic violence and child abuse against the backdrop of coronavirus is yet to be addressed by Minister Franziska Giffey (SPD).

With private and corporate donations both expected to decrease as coronavirus pulls on the purse strings Deutscher Kinderverein CEO Rettinger says, "we cannot simply trust that everything will be fine."

To protect Germany's most vulnerable, politicians are feeling the pressure — time is of the essence for them to provide financial support and enforce all possible resources to ensure the safety of those who are most at-risk.

If you are in Germany and experiencing violence and need confidential advice, call Hilfetelefon's central helpline in Germany at 08000 116 016 or visit hilfetelefon.de.

Hands off! What can we touch during the coronavirus outbreak?

If you find yourself suspiciously staring at your pets, your potatoes and even those birthday cards on the mantelpiece, you aren't alone. Coronavirus is seemingly everywhere. What's safe to touch? Here are some answers. (17.03.2020)