At least two of the people evacuated by Germany were infected with the new coronavirus. The first confirmed fatality from the illness outside of China was reported in the Philippines as countries take action. 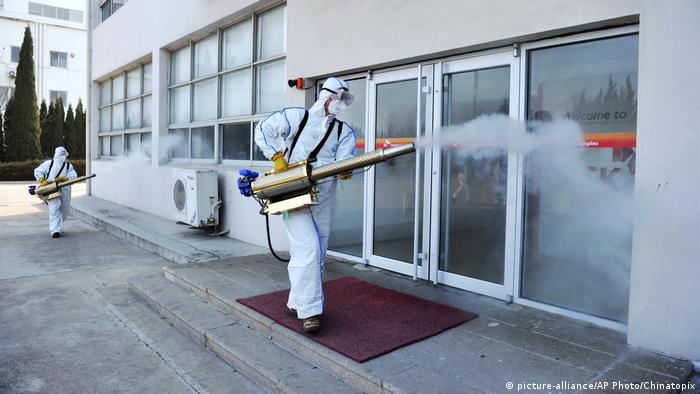 Two German evacuees from Wuhan were infected with the new coronavirus and are currently being treated at University Hospital in Frankfurt, the German Red Cross said in a press release Sunday.

A German Air Force flight on Saturday carried a total of 124 people from Wuhan to Frankfurt, including 102 German citizens.

The two infections were determined during tests at the Germersheim military barracks, where 115 of the evacuees were brought to be quarantined.

The two new cases bring the German total to at least 10.

German Health Minister Jens Spahn said that he had spoken by telephone to his US counterpart and that they agreed health ministers of G7 countries should discuss a unified approach to the coronavirus.

"It doesn't make sense for one country to take measures alone, especially not in Europe," Spahn said. 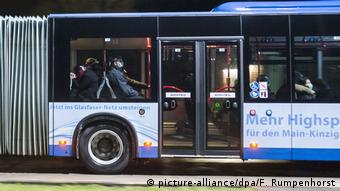 Death in the Philippines

A 44-year-old Chinese man died in the Philippines on Sunday due to complications from the coronavirus, according to the Philippine Department of Health.

"This is the first reported death outside China," World Health Organization (WHO) Philippines representative Rabindra Abeyasinghe told reporters in Manila.

Philippine officials said the man was from Wuhan, the epicenter of the virus outbreak in China, and had arrived in the Philippines on January 21.

He was hospitalized in Manila and isolated on January 25 after experiencing fever, cough and a sore throat. He eventually developed severe pneumonia and died after a week in the hospital. Authorities said he was infected before his arrival.

"I would like to emphasize that this is an imported case with no evidence of local transmission," Health Secretary Francisco Duque said in a press release.

A 38-year-old Chinese woman who had traveled to the Philippines with the man was also infected with the coronavirus and is being quarantined at the same hospital.

The death toll from the virus in China climbed to at least 350 on Sunday. The total number of infections currently stands at more than 14,380, according to Chinese authorities.

Chinese health authorities reported 2,590 new coronavirus cases on Saturday, the most recorded in a single day since the outbreak began. All of the cases were in Hubei province.

On Saturday, Chinese health authorities reported 45 deaths from the coronavirus, with 32 of the fatalities in Wuhan, the capital of Hubei province. The newly reported fatalities bring the death toll of the virus in mainland China from 259 up to 304.

The coastal city of Wenzhou in Zhejiang, 800 kilometers (500 miles) from Wuhan, became the first Chinese city outside of Hubei province to enact movement restrictions. One family member from each household is permitted to venture outside every two days to buy necessities.

Zhejiang has 661 confirmed infections, with 265 of those in Wenzhou, according to the Chinese government, making it the highest tally for any province after Hubei.

Chinese state media reported Sunday that the government will help firms producing vital goods get back to work as soon as possible following the Lunar New Year break. Non-essential sectors will be allowed flexibility in returning to production.

The government also said it would accelerate the construction of hospitals in Hubei province.

On Sunday, China's central bank said it would pump 1.2 trillion yuan (€156 billion) worth of liquidity into markets when they reopen on Monday to bolster the economy amid the outbreak.

The latest from around the world

More than two dozen countries have reported coronavirus cases outside of China. Ongoing measures include travel bans and evacuations.

Europe: A plane evacuating 254 French and European nationals from Wuhan landed Sunday at a military air base in Istres, southern France. Twenty evacuees presented some coronavirus symptoms and stayed at the military airbase for further testing.

Out of the 254 evacuees, 124 were returning to their home countries, French Health Minister Agnes Buzyn said.

Russian Railways said they are suspending passenger trains to China from midnight local time (2100 UTC) because of the coronavirus epidemic.

East Asia: Japan's Foreign Ministry said it would send another charter flight mid-week to evacuate Japanese nationals who are still in Hubei. Three new coronavirus cases were reported Sunday, with 20 now in total.

South Korea said on Sunday it would ban entry to foreigners from Hubei province. Officials reported three new cases bringing the total to 15.

Hong Kong authorities have said they would not close the border with mainland China on Sunday, despite calls for the border to be closed.

Southeast Asia: The Philippines expanded its travel ban to include all foreigners coming from China, expanding an earlier restriction that covered only those from Hubei.

India: India's federal Health Ministry confirmed a second positive case of the coronavirus in Kerala state Sunday. The young female patient returned to India from China on January 24. The first coronavirus case reported in India was also in the southern state of Kerala. The female student from Wuhan University remains quarantined.

India has so far evacuated 640 Indian nationals and seven people from the Maldives from Hubei province. They are being kept in quarantine at a facility organized by the Indian Army.

Morocco: At least 167 Moroccans, mostly students, were repatriated from Wuhan on Sunday by Royal Air Maroc. Members from the Moroccan military and a medical team also accompanied the group.

US: A new coronavirus case was reported in Boston, Massachusetts, on Saturday. A man in his 20s had recently returned from Wuhan and was hospitalized. The US has already declared a public health emergency, introducing a mandatory quarantine for citizens arriving from Hubei province and barring foreign nationals who have visited China within the past 14 days from entry.

On Sunday, the New Zealand Foreign Ministry announced an entry ban on all foreign nationals arriving from mainland China. Australia has imposed a temporary entry ban on foreigners who have traveled through China.

Thailand's Health Ministry announced that a Chinese woman infected with the coronavirus showed dramatic improvement after Thai doctors treated her with a cocktail of anti-virals used to treat flu and HIV.

"The lab result of positive on the coronavirus turned negative in 48 hours,"  said doctor Kriengsak Attipornwanich during the ministry's press briefing.The ministry is awaiting research results to prove the findings.