The UN health body said its recommendation was based on evidence from more than a dozen trials. Meanwhile, India has reported its lowest daily caseload in 558 days. Follow DW for all the latest COVID developments. 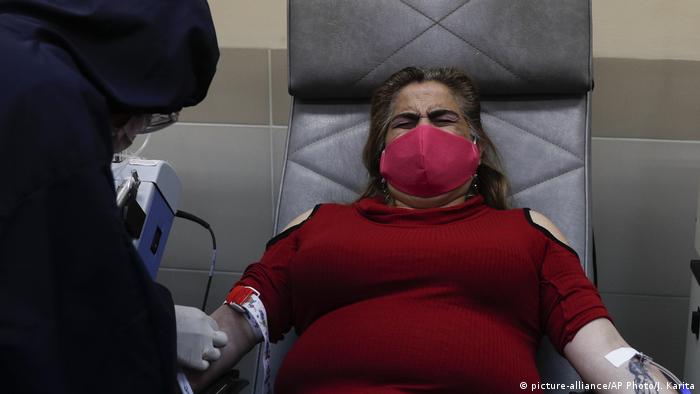 The World Health Organization on Tuesday advised that plasma taken from the blood of recovered coronavirus patients should not be given to people with mild or moderate illness.

"Current evidence shows that it does not improve survival nor reduce the need for mechanical ventilation, and it is costly and time-consuming to administer," the UN health agency said in advice published in the British Medical Journal.

The hypothesis for using plasma was that the antibodies it contains could neutralize the novel coronavirus, stopping it from replicating and halting tissue damage.

However, several studies testing convalescent blood plasma have shown no apparent benefit for treating COVID-19 patients who are severely ill.

And a US-based trial was halted in March after it was found that plasma was unlikely to help mild-to-moderate patients.

Other coronavirus-related news from around the world:

India reported its the lowest daily COVID caseload in more than 18 months on Tuesday as it registered 6,822 new infections. An additional 220 people died from the virus over a 24-hour period, the country’s health ministry announced.

So far, the South Asian nation has recorded more than 34.6 million cases and over 474,000 fatalities.

The United States public health advisers are re-evaluating the ban on foreign nationals entering the country from eight southern African countries. The ban was implemented last month due to fears over the spread of the omicron variant.

"It would be a recommendation from Dr. (Anthony) Fauci and the health and medical experts that will pull back those restrictions, and that's something that's being evaluated," White House Press secretary Jen Psaki told reporters.

Later on Tuesday, Dr. Fauci commented that according to initial studies, the omicron variant was "clearly highly transmissible," and very like more so than delta, but that it was "almost certainly" not more severe.

He added that his team expected to have more information about omicron's resistance to vaccines "in the next few days to a week."

William Schaffner, a professor of preventive medicine at Vanderbilt University in Nashville told DW that Fauci could be getting ahead of himself and "the rest of us are still a little bit more cautious."

"We would like to see more data coming in from South Africa and from other countries before we decide that this virus is not as serious as delta or some of the other variants," he said.

New York City has expanded its COVID-19 vaccine mandate to children aged 5 and above and to those working in the private sector, as the highly transmissible omicron variant spread to more states in the US.

The city — the largest in the US in terms of population —  set December 27 as the deadline for all 184,000 businesses within its limits to make their employees show proof that they have been vaccinated, Mayor Bill de Blasio said.

New Zealand will not send diplomats at a ministerial level to China for the 2022 Beijing Winter Olympics in February, Deputy Prime Minister Grant Robertson announced citing COVID-19 as the reason.

While the US declared a boycott over China's human rights atrocities, Robertson said the move was not related to Washington's decision.

Fiji reported its first cases of the omicron variant on Tuesday, in two Fijian nationals who arrived from Nigeria via Hong Kong on November 25.

Both individuals were fully vaccinated and had been in a border quarantine facility since their arrival because Nigeria was considered a high-risk "red zone" country.

"The indications are that we have averted community transmission at this time," the Pacific nation's health secretary James Fong said in a statement.

Many countries are reimposing restrictions on everyday life amid rising infections. DW Travel offers a brief recap of what rules apply in the EU.

Coronavirus in Lebanon: Lockdown without a strategy

The Lebanese government has ordered a second coronavirus lockdown, forcing shops and restaurants to close and imposing a curfew. But many say it won't be enough to combat the pandemic.