The FDA has granted emergency approval of blood plasma from recovered coronavirus patients as a treatment for those battling the disease. President Donald Trump called the development "a historic breakthrough." 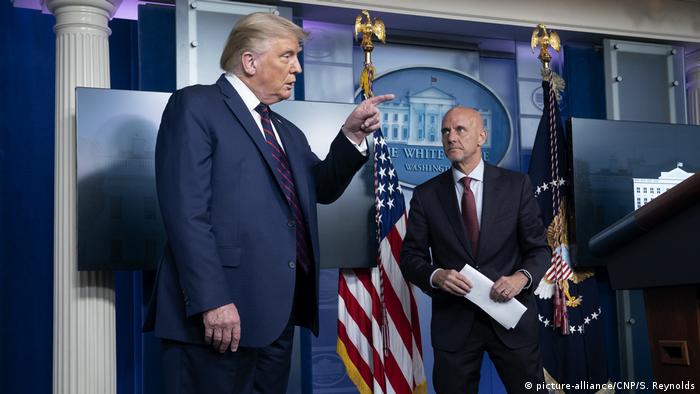 US President Donald Trump late on Sunday announced emergency authorization to treat those suffering from the coronavirus with convalescent plasma, a move he described as "a historic breakthrough."

One of his top health officials said it was a "promising" development, but other experts have cautioned that the treatment needs further evaluation before it should be celebrated.

Trump's declaration came after White House officials suggested there were politically motivated delays by the Food and Drug Administration (FDA) in approving treatments for the novel coronavirus.

The emergency approval makes it easier for some to get the treatment, but is not the same as full FDA authorization.

The blood plasma, taken from patients who have recovered from COVID-19 and have plenty of antibodies, may give benefits to those fighting the virus. But studies into its efficacy, when to administer it and in what doses remain nascent and inconclusive.

In a letter referring to the approval, FDA chief scientist Denise Hinton said: "COVID-19 convalescent plasma should not be considered a new standard of care for the treatment of patients with COVID-19. Additional data will be forthcoming from other analyses and ongoing, well-controlled clinical trials in the coming months."

The World Health Organization (WHO) has said that the evidence supporting the efficacy of plasma treatment was "low quality."

"There are a number of clinical trials going on around the world looking at convalescent plasma compared to the standard of care," WHO chief scientist Soumya Swaminathan said at a news conference on Monday.  "Only a few of them have actually reported interim results...and at the moment, it's still very low-quality evidence."

Convalescent plasma therapy has been used in the last century to treat numerous infectious diseases, with varying levels of success, said Swaminathan. She added that the treatment is difficult to standardize, because people produce different levels of antibodies and the plasma must be collected individually from recovered patients.

Additionally, plasma therapy can come with numerous side effects, including a mild fever and chills to more severe lung-related injuries, said Dr. Bruce Aylward, a senior adviser to the WHO's director-general.

Ahead of Sunday's announcement, the White House had become increasingly frustrated with the FDA's speed on the plasma approval.

Trump told a press conference he thought there had been a "logjam" at the agency over granting the emergency authorization. He alleged there are people at the FDA "that can see things being held up ... and that's for political reasons."

"The FDA commissioner basically allowed the president to mischaracterize the decision and attack the integrity of FDA employees. I was horrified,'' said Sharfstein, a vice dean at Johns Hopkins University's school of public health and a top FDA official during the Obama administration.

"This is a promising therapy that has not been established," Sharfstein added.

Mass testing of Russia's potential COVID-19 vaccine will begin next week. Cases in Germany, Italy, and France continue to surge. Catch up with the latest on the pandemic.

Grafitti against COVID-19 in Togo