Mass testing of Russia's potential COVID-19 vaccine will begin next week. Cases in Germany, Italy, and France continue to surge. Catch up with the latest on the pandemic. 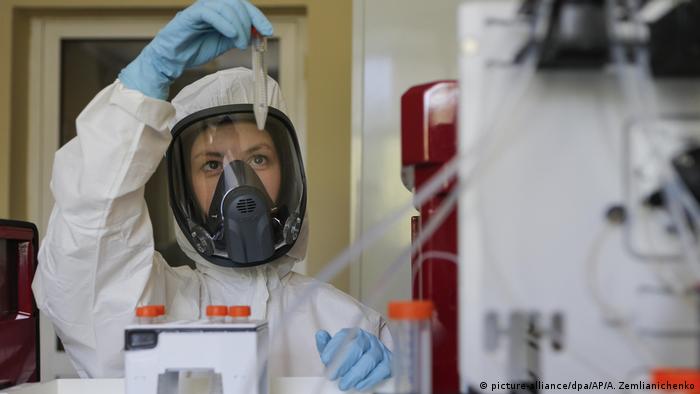 Russia has announced clinical trials of its COVID-19 vaccine will get underway next week, involving tens of thousands of volunteers.

Earlier this month President Vladimir Putin said that Russia had become the first country to register a vaccine for the novel virus, though the declaration was met with skepticism from scientists and the World Health Organization (WHO), who said it still required a meticulous safety review.

Russia's sovereign wealth fund, which is financing the program, said in a statement that trials of the "the Sputnik V vaccine" will begin in earnest next week, and will comprise more than 40,000 citizens.

Hungary will tighten border crossing measures from September 1 as the number of new cases surge in neighboring countries, Prime Minister Viktor Orban told state radio. Orban also said his government would draft a two-year-plan to boost its economy by the middle of September, following a 13.6% drop in second-quarter economic output.

The number of confirmed coronavirus infections in Germany increased by 1,427 to 230,048, and the reported death toll rose by 7 to 9,260, data from the Robert Koch Institute (RKI), Germany's public health authority showed on Friday.

Italy has registered its highest number of infections since May 23, with 845 new cases reported over the last 24 hours, according to health ministry officials.

French health officials have said 4,711 new infections have occurred in the past 24 hours, a post-lockdown record, and a level last seen during the height of the epidemic in the country.

Slovenia has added Croatia to its quarantine list, meaning those returning from its neighboring country will have to self-isolate.

The Philippine government is now requiring all people to wear face shields in addition to masks in all indoor commercial establishments, work places and public transport. Trade Undersecretary Ruth Castelo said the measure was effective nationwide, in all levels of lockdown or community quarantine protocol.

South Korea has added its most new coronavirus infections in months, driven by a surge around the capital Seoul that appears to be spreading nationwide. The 324 new infections was its highest single-day total since early March and the eighth consecutive triple-digit daily increase, South Korea's Centers for Disease Control and Prevention reported.

The new infections recorded on Friday were mostly centered in major cities including Busan, Gwangju, Daejeon, Sejong and Daegu. The latest outbreaks brought the country's caseload to 16,670, including 309 deaths.

Vietnamese police have arrested four men after allegations of defrauding more than 5,000 Americans attempting to buy protective equipment for the coronavirus. The four men acquired almost $1 million (€843,000) from the online scheme, the Ministry of Public Security has revealed.

Kuwait will end its nationwide curfew on August 30, the government has confirmed in a statement.

Nigeria will bar entry to citizens of countries that do not allow in Nigerians, Aviation Minister Hadi Sirika has announced. The tit-for-tat measure is a "principle of reciprocity," Sirika told reporters. "If you ban us from coming to your country, the same will apply the other way."

African governments should speed up the reopening of schools, the WHO has advised, saying that the continent's youngsters will suffer from prolonged closures.

Brazil has now exceeded 3.5 million COVID-19 cases. The South American country reported 45,323 new cases of the coronavirus and 1,204  in the past 24 hours, according to the Health Ministry. Brazil has now registered 3,501,975 infections since the pandemic began, while the official death toll has risen to 112,304. The latest death toll figures takes the total number of fatalities across Latin America past 250,000.

Dozens of journalists have died from the coronavirus in Peru, in the highest reported death toll of media workers from COVID-19 in Latin America, according to journalists' groups that are evaluating data.

Read more: Cuba joins the race for vaccine against the coronavirus

US Senator Bill Cassidy has tested positive for the coronavirus and has decided to self-quarantine for 14 days, according to a statement from his office.

Chinese mining company, Ramu NiCo Management (MCC) Ltd. claims to have immunized employees in Papua New Guinea (PNG) against COVID-19 in an apparent vaccination trial, The Australian newspaper reported.  PNG Health Minister Jelta Wong said the ministry was investigating the claim. The PNG government has suspended all flights from China in the meantime.

National Pandemic Response Controller David Manning banned COVID-19 vaccine testing or trials in PNG on Thursday and said that the National Department of Health had not approved any trials and that all imported vaccines must also be pre-qualified by the WHO. The Chinese company claimed 48 Chinese employees were vaccinated on August 10.

Manning has written to Chinese Ambassador Xue Bing seeking "immediate clarification of the Chinese government's position regarding the vaccination statement.''

Health authorities in Victoria, Australia, have warned that the daily new COVID-19 tally would have to drop "substantially lower than it is now'' before lockdown restrictions can be eased. Victoria has recently seen a downward trend in cases.