Coronavirus digest: US to start vaccinating adolescents after BioNTech-Pfizer approval

The CDC has given a green light to using the BioNTech-Pfizer vaccine in children aged 12 to 15. Meanwhile, Cuba has started inoculating its citizens using two locally produced vaccines. Follow DW for the latest. 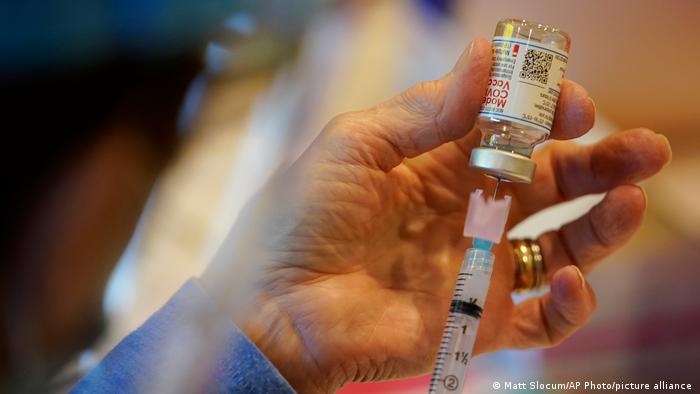 The US Centers for Disease Control and Prevention (CDC) has backed a plan to begin using the BioNTech-Pfizer COVID vaccine in adolescents aged 12-15. The CDC gave the approval after trial evidence showed that there were no severe allergic reactions from the vaccine in the age group.

Some US states, including Georgia, Delaware and Arkansas, have already started offering the vaccine to kids 12 and older. The US Food and Drug Administration (FDA) had authorized the use of the vaccine on Monday.

Rochelle Walensky, the director of the CDC, said the move will open up vaccination to around 17 million adolescents. Dr. Henry Bernstein, a member of the committee advising the CDC, said the vaccination will contribute to "community immunity, and it allows the kids to more safely go back to camps this summer, and back for in-person school."

US President Joe Biden urged parents to get their children vaccinated following the CDC's authorization. "This is one more giant step on our fight against the pandemic."

The US state of California is going to have guidelines and mandates for wearing masks indoors, Governor Gavin Newsom said on Wednesday. In an interview, Newsom said once California fully reopens, it will look "a lot like the world we entered into before the pandemic." California is planning to remove most restrictions on businesses and activities on June 15.

The American Center for Disease Control and Prevention (CDC) said that fully vaccinated Americans could stop masking outdoors and in many indoor settings.

In a statement, the CDC said the vaccines "work in the real world, they stand up to the variants, and vaccinated people are less likely to transmit the virus."

The agency said everyone, including the fully vaccinated, should keep wearing their masks in crowded indoor areas, and on public transportation. It also encouraged people to continue to follow the rules in their communities, even if they were different from the CDC recommendations.

Brazil will halt production of the Sinovac COVID-19 vaccine because the country will run out of raw materials by Friday. Authorities in the state of Sao Paulo said a supply shipment of the vaccines is being held up in Chinese export clearance, further exacerbating the supply issue.

Joao Doria, the governor of Sao Paulo, said this is the second export clearance to hit production this year and he blamed "diplomatic ill will" for the delay. He added that the federal government should apologize to Beijing for its criticism of China.

Dimas Covas, the director of Instituto Butantan, a Brazilian research center manufacturing the vaccine, told a press briefing on Wednesday that China may not clear the raw materials cargo by May 13. Covas said that there was no clear date when Chinese authorities could approve the shipment.

Cuba has started inoculating its citizens usingtwo locally produced vaccines. The vaccines  Abdala and Soberana 2 - are yet to complete their clinical trials, but authorities expect an official approval by June. Health authorities in Cuba say that the phase II results of the vaccines had shown positive results.

Cuba has a history of producing vaccines locally, following US sanctions on the country. Cuba is now working on five potential vaccine candidates for treating COVID-19. Whichever one gets approval will become the first vaccine to be developed in Latin America.

Cuba has not bought any other vaccines produced by companies like BioNTech-Pfizer and Moderna. It started inoculating health care workers with the Abdala and Soberana vaccines in March.

More than two-thirds of the 47 million people in Spain will have been vaccinated against COVID-19 by mid-August, Prime Minister Pedro Sanchez said.

"We are on track for herd immunity: 33 million compatriots will be vaccinated by mid-August," he said, using the term for when most of a population is immune to an infectious disease.

In Germany, the Robert Koch Institute, the country's public health authority for disease control, reported there were 17,419 new COVID-19 infections in the last 24 hours and 278 deaths. The country's seven-day incidence per 100,000 people fell to 103.6 from 107.8 last week.

Russia has reported the first cases of the COVID-19 variant found in India, according to the Kommersant newspaper. About 16 cases of the variant were found among Indian students at Ulyanovsk State University, about 435 miles east of Moscow.

Dilyar Khakimov, an official at the consumer health watchdog, Rospotrebnadzor, said the students were put in self-isolation and were under observation.

The Portuguese government has yet to decide whether it will allow English supporters into the Champions League Final later this month.

The final was moved to Portugal, as the country is on the UK's "green list" which allows UK residents to travel to the country without quarantining on return so long as they test negative.

"On flights from the United Kingdom…there is work ongoing, as soon as a decision is taken, it will be communicated," said a Portuguese government spokesperson.

Australia has reached a supply agreementfor 25 million doses of the COVID-19 vaccine manufactured by Moderna. The government hopes that all Australian adults will have access to jabs by this year following the deal.

The Moderna vaccine is yet to be approved by Australia's drugs regulator. To date, only the Pfizer and AstraZeneca shots have been approved in Australia.

Australia is also in discussion with Moderna to potentially manufacture the vaccine in the country. Brendan Murphy, chairman of Australia's Science and Industry Technical Advisory Group on COVID-19 said that locally made Moderna jabs could be available as early as 2022.

India reported 4,120 deaths and 362,727 new infections in the last 24 hours, according to latest data from the health ministry. The South Asian country now has a total caseload of 23.7 million cases.

On Thursday, multiple bodies in northern India were found buried in the sand along the Ganga River. This news comes days after bodies of suspected COVID-19 victims were found floating in the water in the state of Bihar.

The buried bodies were found draped in a saffron cloth in the Unnao district of Uttar Pradesh. A senior official of the government said that one of the sites was a cremation spot, but didn't confirm if the bodies were of COVID-19 patients.

"Some people in the region do not burn bodies but bury them in the sand by the river. Several bodies appear to have been buried recently, our teams are on the spot and are carrying out a probe," said District Magistrate Ravindra Kumar.

"Even though we are in a state of crisis, we are still using the same rules to approve vaccines that we do under normal times," he said in a television interview on Wednesday. He called for a change in the system in the wake of the current situation. Japan has currently vaccinated just 2.9% of its population.

The Japanese government has been particular about not skipping regulatory steps to determine the safety of the vaccines. This has led to delays in domestic clinical trials and approvals.

Japan is hosting this year's Olympics, which are set to begin in July. The government plans to vaccinate almost all of its elderly population above 65 by the end of July.

The variants were reported in two workers who had returned from Oman and the UAE. Meanwhile, Hong Kong has scrapped a plan to compulsorily inoculate foreign domestic workers. Follow DW for latest.

French, Spanish and Swedish health authorities have identified the first known cases of the highly infectious COVID-19 variant. Hungary has given its first vaccinations a day before the EU rollout. DW has the latest.