Coronavirus digest: Up to 40% of German population are 'high risk'

Germany's ageing population and diseases such as diabetes make COVID-19 particularly dangerous to many, said the country's health minister. Many nations are seeing a second wave of infections. Follow DW for the latest. 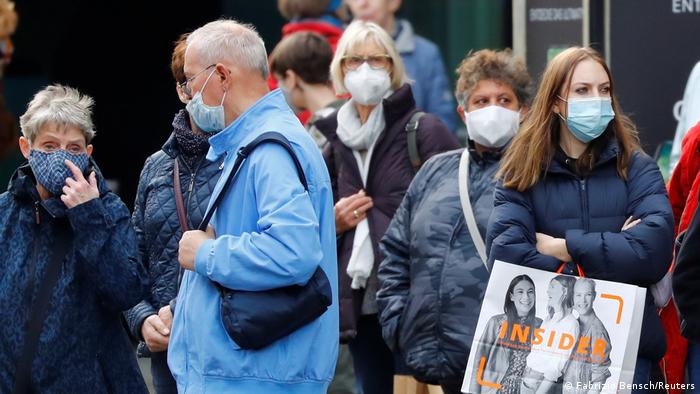 Many parts of the world, including Europe, are seeing a resurgence in the number of cases, after months of slowdown. One out of every five affected people comes from the US, which still has the most cases in the world.

Health Minister Jens Spahn said many people in Germany were classed as "high risk" due to their advanced age. Germany's population is the second oldest in the world, after Japan. Talking to mass-circulation Bild newspaper, Spahn also noted that diseases such as diabetes, high blood pressure, and obesity were also quite common in Germany, just like in most other developed countries.

"All of these are risk factors for this virus as well as many other infectious diseases," Spahn said. "If you go by the definition, 30 to 40% of the population is in a high risk group."

The health minister warned that even if 2% of 20,000 new cases had to be hospitalized every day, that would amount to 400 hospitalizations. He said it would put a great deal of strain on the country's healthcare system.

The German Ethics Commission, the Standing Committee on Vaccination and the National Academy of Sciences Leopoldina have come out against a generalized mandatory vaccination program, they announced on Monday. An exception, they said, should be made for people working in close contact with high-risk patients.

The group also said that the prioritizing of the allocation of vaccines must be carried out according to medical, ethical and legal principles.

Starting Monday night, Portugal will bring a night-time curfew into effect across much of the country. Residents will also have to stay at home from 1 p.m. during the weekend. Prime Minister Antonio Costa announced the new measures after a special cabinet meeting on Saturday.

The rules will last for two weeks and the government hopes that this will prevent the need for a stricter lockdown. President Marcelo Rebelo de Sousa had announced a state of emergency on Friday.

In Ukraine, President Volodymyr Zelenskiy on Monday announced that he had tested positive for the virus.

"There are no lucky people in the world for whom COVID-19 does not pose a threat," Zelenskiy tweeted. "However, I feel good. I promise to isolate myself and I continue to work."

The 42-year-old president said he was running only a mild fever.

Anvisa said it could not give details on what happened because of privacy regulations, but that such incidents included death, potentially fatal side effects, serious disability, hospitalization, birth defects and other "clinically significant events."

US President-elect Joe Biden's healthcare advisers held talks with drugmaker executives to accelerate the development of a potential COVID-19 vaccine, said a spokesman for Biden.

Under the Trump administration Operation Warp Speed had already struck deals with pharmaceutical companies in an effort to speed up the search for treatments. During his speech on Saturday, Biden announced the creation of a task force to address the pandemic in the US.

Taiwan said it has not yet received an invitation to a World Health Organization (WHO) meeting on the COVID-19 pandemic that is scheduled for later this week. Taiwan's foreign ministry accused China of obstructing their invitation.

The WHO's refusal to invite Taiwan based on political considerations makes a mockery of the body's "health for all" claim, the ministry said. China has claimed rule over Taiwan, which currently has a democratically elected government.

The US mission in Geneva has urged WHO chief Tedros Adhanom Ghebreyesus to invite Taiwan to the WHO's decision-making body, the World Health Assembly (WHA).

Iran's health ministry reported a record number of new cases in one day on Monday with the 10,463 new cases taking the country's total to 692,949. In the same period 458 people died.

New restrictions will come into place on Tuesday as the country goes through its third wave of infections. For one month, all non-essential business must close from 6 p.m.

Germany has gone into a partial lockdown, which greatly affects the travel industry but borders are to remain open. Here is what you need to know about Germany's entry regulations.

Angela Merkel has congratulated Joe Biden on his electoral victory and confirmed that Germany will stand "side by side" with the US on tackling the coronavirus pandemic as well as other global challenges.

A coronavirus infection can present in a variety of ways. Researchers have now found some important biomarkers and identified seven groups of symptoms. These could help in treatment and vaccine development.

All non-residents coming from Denmark will no longer be allowed into the UK, the government announced. Denmark ordered a nationwide mink cull after a mutated version of the coronavirus was transmitted to humans.