Both Russia and Ukraine reported a record number of new infections and deaths on Thursday. Meanwhile, German officials are calling for a ban on New Year's Eve fireworks to curb holiday partying. Follow DW for the latest. 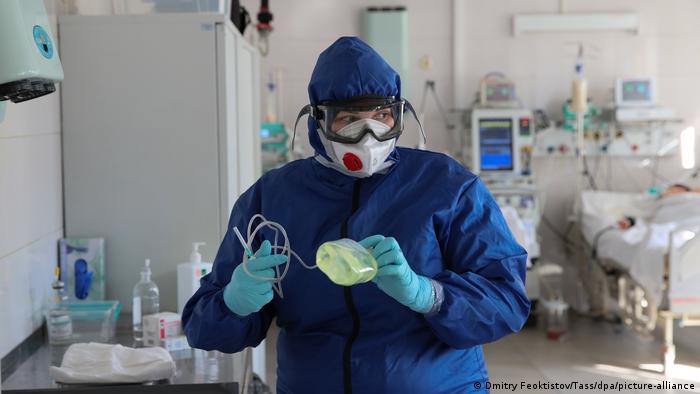 Russia reported record highs of 23,610 new cases and 463 deaths on Thursday, pushing its case tally above 2 million and its death toll to 34,850. Russia is the fifth country in terms of the number of infections reported, behind the United States, India, Brazil, and France.

Despite a recent rise in case numbers, authorities have so far resisted lockdown restrictions on a national level similar to those imposed earlier in the year. Instead, they have introduced new rules on wearing masks and gloves in public calling for continued social distancing.

The capital Moscow is the worst-hit area, accounting for 6,438 — or more than a quarter — of the cases reported on Thursday.

Governor of the US state of California Gavin Newsom ordered a night-time curfew on Thursday. The stay-at-home order will run from 10 p.m. to 5 a.m. and applies to all non-essential work and gatherings and will affect 94% of the state's 40 million-strong population.

The Center for Disease Control and Prevention (CDC) urged Americans not to travel for Thanksgiving and recommended celebrating the holiday only with members of the same household. The CDC warned families to take extra precautions if hosting returning college students or members of the military. It said the precautions include keeping six feet apart, wearing masks, and one person serving food. It recommended eating outside wear possible.

Hardship for US health care workers

US health care workers under pressure

The US also renewed border restrictions with Mexico and Canada for a further month, until December 21 — restrictions on non-essential travel on land borders were first imposed in March.

States across the country began imposing new restrictions after the national death toll surpassed a quarter of a million on Wednesday.

The African continent as a whole has also surpassed 2 million confirmed cases. The Africa Centers for Disease Control and Prevention said that in addition to crossing that milestone, its numbers show the 54-country continent has also seen more than 48,000 deaths.

Bars and restaurants are set to reopen in Barcelona and the wider Catalan region of Spain from Monday. The region has been under heavy restrictions for five weeks — heavier than in the rest of the country. The measures will be relaxed piecemeal over the next two months, as long as the situation doesn't deteriorate again.

Italy's coronavirus commissioner said on Thursday that the country will begin immunizing people in January, with most Italians receiving an immunization by September.

Italy will receive 3.4 million doses of the Pfizer vaccine in the second half of January 2021 through the EU's purchase program, enough to immunize 1.6 million of Italy's 60 million residents, said special commissioner Domenico Arcuri. He added that elderly Italians and individuals at most risk of exposure would be first in line.

German officials are calling for a ban on New Year's Eve fireworks, in a bid to curb holiday partying. The mass release of pyrotechnics around midnight on New Year's Eve is inextricably linked with alcohol, groups of people and a party atmosphere, the chairman of one of the two major German police trade unions, Rainer Wendt, told Bild newspaper.

Meanwhile, North Rhine-Westphalia's Interior Minister Herbert Reul said that he hoped that parties on the holiday remained as minimal as those over the Halloween weekend, which he said was relatively quiet.

The number of confirmed cases also increased by 22,609, bringing the total number of infections in Germany to 855,916, according to the Robert Koch Institute for infectious diseases. The reported death toll rose by 251, bringing the total to 13,370. The new figures come as health officials debate new measures to implement through the winter months.

South Korea began enforcing tighter social distancing rules in Seoul, Gwangju and parts of Gangwon province, as the country — known for mostly stamping out the virus early on — experienced an unexpected surge in cases. More than 340 new cases were announced on Thursday, bringing the total number to 29,654.

Chinese President Xi Jinping called for closer international cooperation on making a vaccine available. "To beat the virus and promote the global recovery, the international community must close ranks and jointly respond to the crisis and meet the tests," he said via video at an event for the Asia-Pacific Economic Cooperation forum.

Chinese companies Sinovac and Sinopharm are in the late stages of testing vaccines, putting them among nearly a dozen companies at or near that level of development.

Read more: China: An unpopular winner in the year of the coronavirus

Turkey is set to buy around 20 million vaccine doses from China's Sinovac Biotech, Health Minister Fahrettin Koca told parliament. The government is also in talks to buy a vaccine from Pfizer Inc and BioNTech.

Japan is on "maximum alert" after reporting a record number of new infections, with 2,179 new cases – the first time the country has confirmed more than 2,000 cases in one day since the pandemic began. "We are now in a situation of maximum alert," Prime Minister Yoshihide Suga said. "I ask you, the Japanese people, to fully implement principles such as wearing masks."

The small Pacific nation of Samoa reported its first positive virus test, although a second test on the same patient returned a negative result. According to the Samoa Observer, Prime Minister Tuilaepa Sailele Malielegaoi said the patient was a sailor who had been staying in a quarantine facility since flying in from New Zealand on Friday. Samoa is home to around 196,000 people.

Italy: Leonardo da Vinci copy handed back to museum that didn't know it had been stolen 20m ago

John Bolton, former National Security Advisor for Donald Trump, calls for the fall of the Iranian regime in DW interview 4h ago