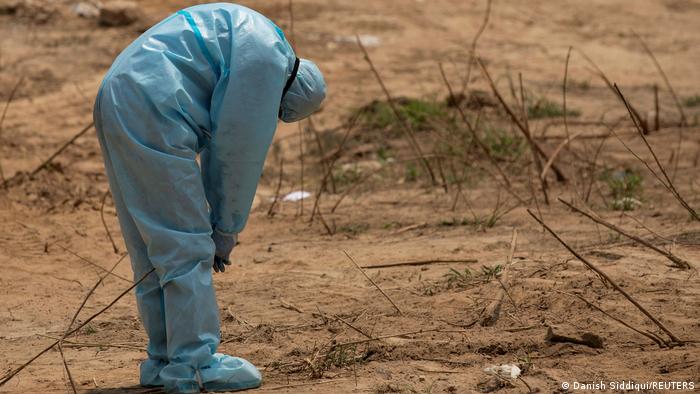 India's excess deaths, a count of the number of people who have died in excess as compared to the numbers recorded in the same period in previous years, could be 10 times higher than the official death toll, one of the most comprehensive studies shows.

The study, published by Arvind Subramanian, the Indian government's former chief adviser, and two other researchers, shows that the number of people who died in excess between January 2020 and June 2021 could be between 3 million and 4.7 million.

Spread of 'Delta Plus' variant in India worries experts

India's official death toll, at 414,000, has come under repeated scrutiny by health experts worldwide, especially after images of people waiting for oxygen cylinders at hospitals or mass pyres lighting up the skies of the capital city were beamed to the world.

Indian officials have dismissed those concerns and said they were exaggerated claims.

Meanwhile, the country has seen aslowing down of coronavirus infections. On Tuesday, it reported 30,093 cases in the last 24 hours, the lowest figure in the last four months. The official death toll rose by 374.

Here are the major developments from around the world.

Muslims across Indonesia marked a grim Eid al-Adha festival for a second time this year. Indonesia is battling a surge in coronavirus infections, with the country seeing the most confirmed daily cases in Asia.

The number of people infected by the virus at the Olympic Games has climbed to 71. The number includes international visitors who have come to work at the Games. The Olympics chief also said he had "doubts" and "sleepless nights" over organizing the summer Games.

More than half of Australia's 25 million people are under lockdown,  after South Australia became the third state to announced COVID lockdown rules, joining extended lockdown in Victoria and Sydney. New South Wales, home to Sydney, is tackling the worst COVID outbreak this year, with more than 1,400 cases since last month when the first case was reported.

South Australia, a state of 1.8 million people, imposed a seven-day lockdown after detecting five infections linked to a returned traveler. "We hate putting these restrictions in place but we believe we have one chance to get this right," South Australia premier Steven Marshall told reporters.

Meanwhile, the largest city of Sydney, where the latest delta outbreak started before spreading elsewhere, is in the fourth week of a five-week lockdown. The country has recorded over 32,000 cases and 915 deaths.

In the Australian city of Perth, a man escaped mandatory quarantine in a hotel by scaling down a rope made of tied-together bedsheets from a fourth-floor window, police said. After arriving in the city on an interstate flight from Brisbane, the man had his application for entry refused under the state's stringent border entry rules.

He was told to leave the state within 48 hours and was taken to a hotel for temporary quarantine, but "he climbed out a window of the fourth floor room using a rope made of bed sheets and fled the area."

South Korea's prime minister has apologized for "failing to carefully take care of the health" of hundreds of sailors aboard a navy ship engaged in anti-piracy missions off East Africa. Two military planes were dispatched to fly the sailors home.

Singapore will tighten social restrictions beginning July 22, as new local cases almost doubled on Monday from the previous day. The health ministry said it will put the brakes on restaurant dining and gatherings of more than two people at a time.

A close colleague of Myanmar's Aung San Suu Kyi died in prison from COVID-19. Nyan Win, who was 78, was a prominent politician and the former spokesman for Suu Kyi's National League for Democracy (NLD).

He was transferred from the Insein Prison to Yangon General Hospital, at which point he was already in critical condition, a doctor at the hospital told dpa.

The politician had been in prison since his arrest alongside many other NLD members a few weeks after a military coup in February this year. He reportedly suffered from diabetes and kidney problems.

Pharmacies in Germany have also stopped issuing vaccination certificates. A portal used to issue the certificates was apparently hacked by cybercriminals, who were able to make their own certificates from fake pharmacies.

Europe became the first region to cross more than 50 million coronavirus infections, with the region seeing more than a million new infections about every eight days. It has reported nearly 1.3 million deaths since the pandemic began.

COVID: Life slowly coming back to normal in India

Less than two months ago, India's health care infrastructure was dealt a hefty blow by the second wave of the coronavirus. After a period of collective grief, Indians are now stepping out as life resumes.