Following the US and Brazil, India has become the latest country to log over 300,000 COVID fatalities. Experts believe the actual death toll to be much higher. Follow DW for the latest. 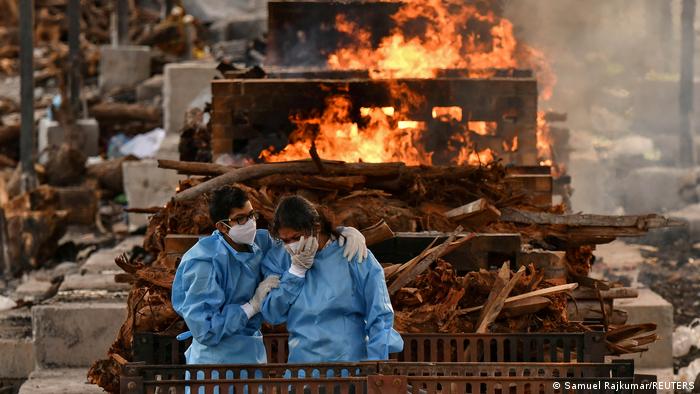 As India battles a devastating spike in cases, the death toll is feared to be higher than reported

The South Asian nation is the third, after US and Brazil, to hit the grim landmark of 300,000 deaths.

Experts believe the actual death toll to be almost two to three times higher, as the virus continues to spread in rural areas where record keeping is difficult and health facilities are not well equipped.

The latest wave of infections has led to a dire healthcare crisis, with critical shortages of oxygen and medicine. The surge has spread from India's densely populated cities to rural areas.

Ahead of the Tokyo Olympics, Japan opened mass vaccination centers on Monday in an effort to speed up the inoculation process.

Two centers in Tokyo and Osaka respectively, run by the military, are set to administer thousands of shots daily. The elderly population will be prioritized during the process.

Just 2% of Japan's 125 million population, have been fully vaccinated so far. Criticism has been mounting due to a slow rollout process.

Public opinion is largely against holding the Olympics this year, which were already pushed back in 2020 due to the pandemic.

Authorities in Cambodia eased restrictions further over the weekend, including the night curfew and ban on alcohol sales. However, the country has been battling a surge in cases February.

As the spread gradually reduces, overcrowded places such as prisons and garment factories are causing concern. Local media reported at least 18 inmates at the main prison in capital city Phnom Penh had tested positive. There has also been an outbreak in the Preah Sihanouk prison at Cambodia's coast, where hundreds have tested positive according to Human Rights Watch.

The Federation of German Industries (BDI) has called for an end to compulsory testing in companies as well as requirements to work from home, the Funke media group reported.

"Vaccination progress in society and companies must be connected with a parallel return to normal business operations," the BDI said in a new report.

A step-by-step plan has been specified, in order to reduce and gradually remove the restrictions placed to control the coronavirus pandemic. The report also rejected the possibility of easing of vaccine patents.

Meanwhile, German Health Minister Jens Spahn has called for the BioNTech-Pfizer coronavirus vaccine to be reserved for schoolchildren so that they can be fully vaccinated when returning to the classroom for the next school year.

France is considering imposing tighter restrictions on visitors from the UK, as travel for summer is set to reopen for this year. The spread of the virus variant first found in India has caused concern among health officials.

French Foreign Minister Jean-Yves Le Drian suggested that Britain could be put in a health category of its own.

France is already imposing restrictions on visitors from India and 15 other countries, while preparing to relax requirements for travelers from the EU and several other countries.

Hotel bookings in Spain have picked up from a year earlier showed official data. The number of nights booked by tourists came up to 4.05 million in April, as opposed to zero from a year earlier, when the country was under harsh lockdown.

However, the bookings are still 85% lower than 2019, before the pandemic began. Bookings for the first four months of the year were 71% lower than last year.

Prime Minister Pedro Sanchez announced that fully vaccinated people from any country would be allowed to enter Spain from June 7, in an effort to boost the tourism sector. Starting today, Spain will also be lifting restrictions on travelers from Britain. Tourists from the UK are significant contributors to the Spanish economy.

However, Britons traveling back from Spain will need to quarantine for 10 days and get tested twice, as Spain is on the UK's amber list.

The US Centers for Disease Control and Prevention is currently conducting a probe into reports of heart problems among a small number of teenagers and young adults who were vaccinated against COVID-19.

Correction, May 26, 2020: An earlier version of this article incorrectly listed how many people have recieved a COVID vaccine in Japan so far. The entry has been corrected. We apologize for the error.