The condition appeared in some adolescents about four days after the second dose of the Moderna or Pfizer vaccine. Meanwhile, Vietnam went ahead with its polls, despite a surge in infections. Follow DW for the latest. 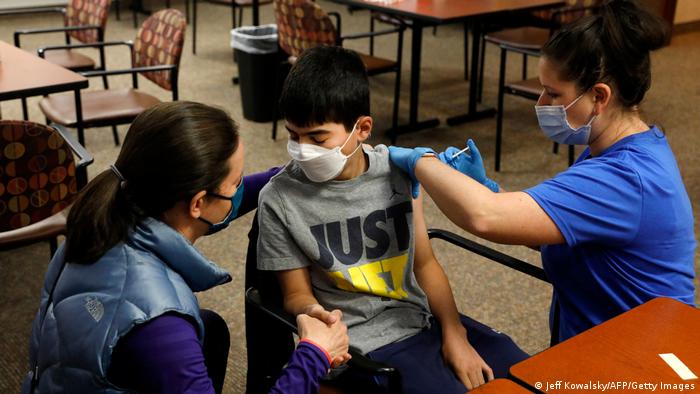 The heart condition was reported four days after the adolescents received the Pfizer or Moderna jab.

The US Centers for Disease Control and Prevention (CDC) is currently conducting a probe into reports of heart problems among a small number of teenagers and young adults who were vaccinated against COVID-19.

The CDC is reviewing reports of a condition known as myocarditis, or inflammation in the heart muscle, after receiving the vaccine, according to a report in the New York Times, citing the CDC's vaccine safety group.

The condition appeared in some adolescents and young adults about four days after the second dose of the Moderna and Pfizer vaccine.

The CDC reportedly said that the review was in its early stage, and there were "relatively few" cases and it could be unrelated to the vaccination.

Here are some other COVID related developments from across the world...

Health officials of Los Angeles county said that the most common variant of concern in the county was the one discovered in the UK. In the past week, 53% of specimens in thee public health lab were of the UK variant, surpassing the previous California variants.

The county said that variants found in Brazil and South Africa were also detected in the samples.

Vietnam went ahead with its pollson Sunday, despite a recent surge in COVID-19 infections. Tens of millions of people are expected to vote, under safety protocols, to select a legislature.

The election to Vietnam's 500-seat national assembly is held once in five years. The polls come at a time when Vietnam is in talks with Russia to produce the latter's Sputnik V vaccine. The country has currently administered 1 million doses of COVID-19 vaccine across the country, since March.

India reported 240,842 official new COVID cases in the last 24 hours on Sunday, taking the country's official total infection tally up to 26.5 million. The country reported 3,741 deaths, which raised the official death toll to 299,266.

German Health Minister Jens Spahn has called for the BioNTech-Pfizer coronavirus vaccine to be reserved for school children so that they can be fully vaccinated when returning to the classroom for the next school year.

"One way to have regular classes after the summer vacations is to vaccinate young people," Spahn said in comments to the mass-market newspaper Bild am Sonntag.

The aim would be to have all school students offered the vaccine by the end of August, Spahn added.

Meanwhile, on Sunday, Germany's confirmed COVID cases rose by 6,714 to overe 3.6 million, according to data from the Robert Koch Institute.  The death toll rose by 82 to 87,380.

Starting Sunday, all travelers entering Germany from the UK will have to quarantine for a period of two weeks, regardless of them providing a negative test result for COVID. This measure was taken owing to concerns related to the spread of the variant found in India, in the UK.

Germany has only allowed German citizens and residents to enter their country, while air, rail and bus companies are barred from transporting all other passengers.

The US and Canada now allow the BioNTech-Pfizer vaccine to be administered to teenagers. Germany could follow suit this summer.

The Indian government has slammed the posts as "completely false," with officials concerned that the term "Indian variant" could hurt the country's reputation.