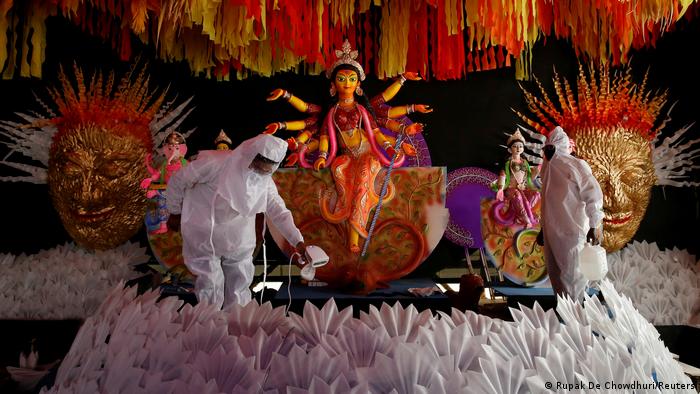 The number of coronavirus cases in India – the world's second-worst hit country in terms of figures – has topped 8 million on Thursday as the country grapples with the prospect of a difficult winter.

Authorities are getting ready for a surge as Diwali — the country's most important religious festival, which this year takes place on November 14 — approaches.

Experts have said crowds gathering for the event could exacerbate the coronavirus crisis.

The health care system "will get really stressed" if the surge continues, Randeep Guleria, director of the All India Institute of Medical Sciences, told the Times of India newspaper.

The winter pollution crisis, which hits Delhi each year, could also make things worse. The Indian capital saw a record increase in figures on Wednesday.

In neighboring Pakistan, authorities have ordered all businesses, including restaurants, wedding halls, and markets, to close after 10 p.m. The country has also seen an increase in cases this month with more than 900 new cases and 16 deaths on Thursday.

The tiny Pacific archipelago of the Marshall Islands has reported its first cases of the coronavirus after two people who flew from Hawaii to a US military base tested positive. The islands had, until now, been one of the last places in the world to have reported no cases of the virus.

German Chancellor Angela Merkel and French President Emmanuel Macron have ordered their countries back into lockdown, as the second wave threatens to overwhelm Europe.

The European Central Bank is under mounting pressure to signal further monetary stimulus as new restrictions darken the economic outlook for the eurozone.

In Russia, President Vladimir Putin has said there are no plans to introduce a nationwide lockdown, despite the country setting new records for coronavirus infections and fatalities on Thursday. The Russian government announced a new aid package of 11 billion roubles ($138.9 million, €118 million) for the country's most hard-hit regions. The package comes amid reports of patients bringing their own beds to hospitals and other medical supply shortages. Russia logged over 17,700 new cases and 366 fatalities over the past 24 hours.

Greece announced a new round of restrictions, including a curfew and shutdown in the country's second-largest city Thessaloniki. All public and private gatherings have been banned, while playgrounds and museums have been ordered to close.

The UK government has said it will do everything it can to avoid putting the country into a second national lockdown. Housing Minister Robert Jenrick said the government believed it could control the virus with tough local measures.

The United States economy grew by over 33% between July and September, making it the largest quarterly gain on record. The jump follows a massive plunge at the start of the pandemic in the spring , which prompted businesses to close and put tens of millions out of work. Despite the jump, data released by the US Commerce Department shows that the economy is not yet out of the woods. Hiring has lagged while coronavirus cases in the US continue to surge.

Officials in the Alaskan city of Anchorage said the area is on a "dangerous path," with coronavirus cases on the rise. They are urging people to avoid gatherings, wear masks in public and follow other social distancing orders.

The acting mayor of the city, Austin Quinn-Davidson, said she had been meeting business leaders, health officials, and others. The aim, she said, was to make decisions that protect health but also impose minimal restrictions that would allow businesses to stay open.

US President Donald Trump has faced criticism after he held a pair of in-person campaign rallies in Arizona, despite a surge in COVID-19 cases. Trump has been accused of prioritizing his re-election above the health of his supporters.

Argentina's coronavirus fatalities have now risen above 30,000, a grim milestone for a country battling one of the world's
highest daily death tolls.