Unvaccinated travelers from Spain and the Netherlands could now have to quarantine for longer on arrival in Germany. In the UK, thousands attend a music festival. Follow DW for the latest. 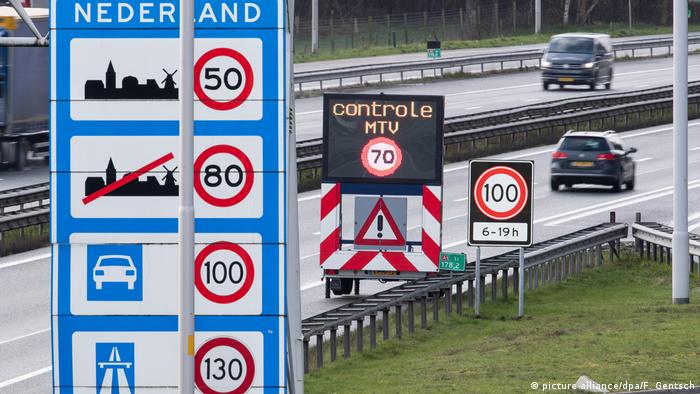 The German-Dutch border, effectively part of the Paris-to-Moscow trunk road across Europe, is one of comparatively few that never closed during the pandemic

Germany will require unvaccinated travelers from Spain and the Netherlands to quarantine for at least five days from Tuesday after it classified both EU countries as coronavirus "high incidence areas" on Friday.

Cases in both countries jumped to over 600 per 100,000 people per week in the course of July, according to the European Center for Disease Prevention and Control.

The Robert Koch Institute (RKI) said on Friday that Germany's per 100,000 rate over seven days had risen to 13.2. That's among the lowest in Europe, well below the government's own benchmark of 200 for an international high incidence area, but it's also on the rise from a low of 4.9 on July 6.

Chancellor Angela Merkel urged Germans to get vaccinated as so far only 60.6% of the population have received two shots and 48.5% have got one shot.

Authorities are blaming the increase in cases around Europe on the more contagious Delta variant.

The RKI, which has handled Germany's COVID-19 response, recommended the change of Spain and the Netherlands from 'risk area' status.

From Tuesday, arrivals from Spain and the Netherlands will have to quarantine for five days unless they can prove they are fully vaccinated or have recovered from the coronavirus. Other travelers will then be able to avoid the ten day quarantine if they can show evidence of a negative test for coronavirus after five days in Germany.

The new classification in the middle of the summer season will be an especially hard blow for the hamstrung Spanish tourism sector as the country looks to reinvigorate its economy after months of travel restrictions. It could also complicate matters for daily cross-border commuters in border areas in the west of Germany.

The European Medicines Agency (EMA) on Friday recommended the use of Moderna's vaccine for those aged between 12 and 17, paving the way for it to become the second shot approved for adolescent use in the bloc.

A longer gap between two doses of BioNTech-Pfizer's COVID vaccines leads to greater overall antibody levels than a shorter gap, a study led by researchers at the University of Oxford found. Even though there is a drop in antibodies after the first dose, fully vaccinated individuals are effectively protected from severe forms of COVID.

Thousands will attend a music festival in eastern UK this weekend, in one of the biggest gatherings since most restrictions were lifted. The four-day Latitude festival is expected to attract around 40,000 people even though cases broadly rise in the country.

Spain will donate 7.5 million vaccines to other countries, Prime Minister Pedro Sanchez said. The vaccines will be distributed through the COVAX program, mainly to Latin America.

The minister added that the health experts of the Therapeutic Goods Administration had thoroughly studied evidence before approving the vaccine for use. Authorities would soon announce priority groups among those eligible.

BioNTech-Pfizer had been approved for those above 16 until now.

New Zealand has closed its border to Australia, Prime Minister Jacinda Ardern announced. The two  shared a travel bubble  since April that allowed people to travel to either countries without the need to quarantine.

Taiwan will lower its COVID-19 alert level from next week though some restrictions will remain, the government announced. Rapidly falling domestic infection numbers allow authorities to relax strict curbs imposed after a spike in cases mid-May.

Organizers of the Tokyo Olympics have announced 19 new cases linked to the Games. The organizing committee said that three athletes were among those who tested positive. One of the athletes was a close contact of a Czech beach volleyball player who had previously tested positive, the report noted.

The news comes after Japan saw its highest case count since January on Thursday, reporting 1,979 cases. The latest figures bring the total of Olympics-related infections since July 1 to 106.

How's the mood in Tokyo ahead of the Olympic Games opening?

In South Korea, tough social distancing measures have been extended by two weeks in the greater Seoul area, where 70% of the recent cases have been detected, a public health official announced. This means that a ban on gathering of more than three people in and around the Korean capital would continue until at least August 8.

Meanwhile, the Seoul government warned the country's main labor federation to cancel a planned rally in defiance of a ban on large public gatherings, as it worked to contain a surge in cases. More than 800 members of the Korean Confederation of Trade Unions are expected to hold a rally, calling for wage hikes and better welfare.

However, the rally would be in violation of restrictions that remain in place in many parts of the country. South Korea's tally of infections stands at 185,733, with a death toll of 2,066, official data showed.

The Philippines will ban the entry of travelers from Malaysia and Thailand for a week beginning July 25, a public official said. The country had previously banned travelers from eight countries including Indonesia and India.

Chicago Public Schools system announced students, teachers and staff will be required to wear masks when they return to classrooms beginning August. Visitors to school buildings will also have to wear masks regardless of their vaccination status.

Arkansas, Florida, Louisiana, Missouri and Nevada, some of the states with the highest numbers of new infections, are also seeing a rise in the number of people getting vaccinated, White House officials said. Republican leaders have doubled down on efforts to win over skeptics.

Brazil registered 49,757 new cases of coronavirus and 1,412 COVID deaths in the last 24 hours, its Health Ministry announced on Thursday.

Katie Hopkins to be deported from Australia for flouting quarantine rules

Katie Hopkins talked about violating the hotel quarantine rules in Australia. Officials called her behavior a "slap in the face" for all those currently in lockdown.

Australia's largest city will likely extend its current lockdown beyond the end date of July 16. Meanwhile, Taiwan has reportedly bought 10 million doses of the BioNTech-Pfizer vaccine. Follow DW for the latest.