State governments are scrambling to set up mobile COVID-19 vaccination centers in western Germany as rescue efforts increase the threat of infection. Residents say they have bigger concerns than the pandemic now.

Germany: Concern over spread of COVID-19 in flood areas

Fears are growing that the flooding in western Germany could cause a spike in coronavirus cases as rescue efforts are being forced to continue without adequate social distancing and hygiene measures.

But people on the ground have very different concerns. "It would probably obstruct everything and frustrate people even more if you had to check social distancing," a resident of the state of North Rhine-Westphalia (NRW) told DW's Tessa Walther.

"You hear quite a lot that this flood wave just swept COVID away," said another man, who was helping to clear debris.

But that is not the case, as Olav Kullak, who runs one of NRW's new emergency mobile vaccination centers, told DW. "In a very sensitive way, we have to persuade the population here that everything has been washed, except for this virus," he said.

Sensitivity is key, as state authorities have come under scrutiny for their response and handling of the crisis — though fears about the coronavirus are still very real. "At the moment a lot of people are coming together in tight spaces, in order to be able to overcome the crisis together," David Freichel, a spokesman for the Rhineland-Palatinate government told the RND media outlet on Tuesday. "We have to be careful that overcoming the catastrophe doesn't become a superspreader event."

The Health Ministry of NRW voiced the same concerns, describing how many people are being forced to sleep in close quarters in the emergency shelters. To mitigate any new outbreaks, authorities in both states are currently scrambling to establish basic health care infrastructure, including mobile vaccination centers to make up for those now damaged or unusable because of the floods.

"The people in the disaster areas surely have very different problems than the coronavirus, I can understand that," NRW Health Minister Karl-Josef Laumann said in a statement. "But, if the people, especially in the emergency shelters, are infecting each other, that will only add to the burden on the structures on the ground." The minister called on everyone in the state get vaccinated. NRW, Germany's most-populous state, has already fully vaccinated nearly 9 million people, almost 50% of its population.

The situation unfolding in western Germany is unprecedented, according to experts, but it could be worse. "Of course, these are scenarios that we didn't have to deal with over the past year," said Daniel Lorenz, of a disaster research center at the Free University of Berlin. "But I wouldn't call it a perfect storm — compared to last winter we're in the relatively fortunate situation that a lot of people are already vaccinated, and that it's summer, so not that many activities have to take place indoors."

On top of that, Lorenz pointed out that rescue workers were traveling from across Germany to help in the flood-hit regions of western Germany, and so increasing the risk that the virus would spread. "It's very dynamic and there's a lot of fluctuation in personnel on the ground," said Lorenz. 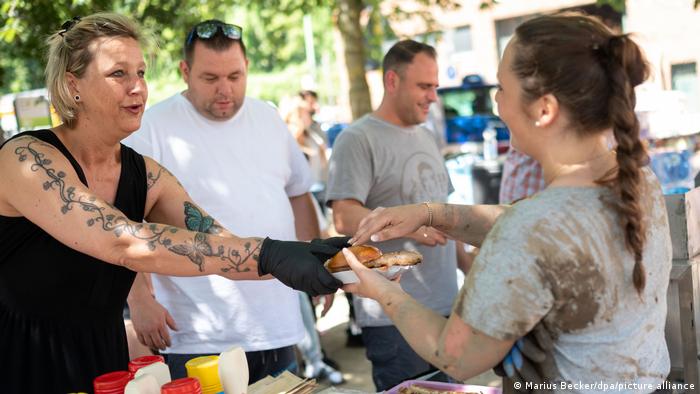 Distancing measures have almost become impossible during the cleanup operations

One of many health dangers

Health crises following natural disasters are nothing new, and emergency services and authorities would expect such threats, Holger Berens, the chairman of Germany's BSKI federation for the protection of critical infrastructures, told DW.

"You have to imagine, when this water flows away, it will leave animal carcasses in the mud from the slaughterhouses," he said. "We'll have spilled oil tanks, chemicals that were stored somewhere, and which will now leak into the water. The mud is highly toxic."

Berens said these issues could outweigh the risk of COVID-19. "In my opinion, these other things are actually the main priority right now, and of course coronavirus is a problem, but for me other things are posing the primary health threat right now," he said.

Berens was shocked by the extent of the damage caused by the flooding last weekend, even though he has been advising companies and government agencies on infrastructure protection for over 25 years.

The Federal Office of Civic Protection and Disaster Assistance (BBK) draws up plans for relief, although state governments carry the responsibility for implementing them in their respective regions. But, Berens said, though BBK's plans are comprehensive and were already in the process of being modernized even before last week, the agency may have also been taken by surprise as to the extent of the catastrophe.

"The health provisions are in place, from my point of view, the plans work — OK, maybe not 100%, but they work," he said. "And I'm sure this flood disaster will be used to model and adapt future plans. No one can predict exactly what will happen."

With the recent floods causing billions of euros in damage to homes, businesses, roads and rails, Berlin is set to release emergency aid to rebuild the affected regions.

More than 160 people have died as a result of last week's devastation, but with dozens more still unaccounted for, the death toll is expected to rise. Merkel has pledged financial assistance.

Germany: Concern over spread of COVID-19 in flood areas