Coronavirus digest: England's lockdown could last more than a month

A senior UK minister has said new stay-at-home orders, announced Saturday, could be extended if the infection rate doesn't drop. Geneva is preparing to airlift patients to other Swiss hospitals. Follow DW for the latest. 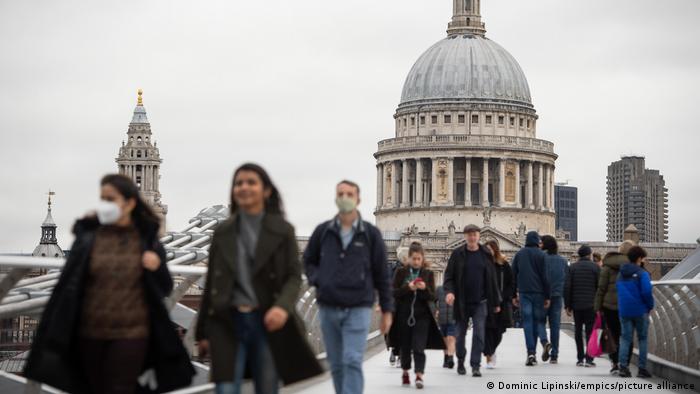 The second lockdown in England could last more than a month, a British minister warned on Sunday, depending on how quickly the infection rate can be brought down.

"With a virus this malignant, and with its capacity to move so quickly, it would be foolish to predict with absolute certainty what will happen in four weeks' time,'' UK Cabinet minister Michael Gove told Sky News.

"We're going to review it on the 2nd of December but we're always driven by what the data says.''

The country follows Germany, Austria and France who announced new curbs on movement this week amid a huge surge in coronavirus infections.

Concerns are growing that Europe's new lockdowns could last until and even over Christmas. 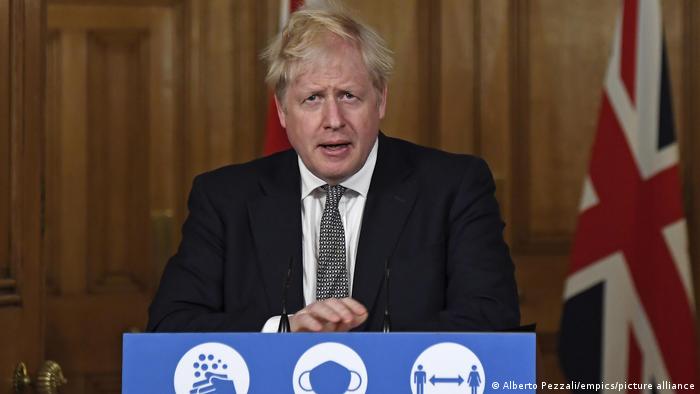 Police in Spain made dozens of arrests during clashes with anti-lockdown protestors for a second consecutive night.

The biggest disturbances were in Madrid where scores of demonstrators chanting "freedom!" torched rubbish bins and set up makeshift barricades on the city's main thoroughfare, the Gran Via, images on social media showed.

The head of the regional government of Madrid, Isabel Diaz Ayuso, blamed the unrest on "organized groups looking to take advantage of the situation and people's fears."

The Swiss canton of Geneva is to impose a state of emergency as the region's intensive care hospital beds fill up with COVID-19 patients.

Starting late on Monday, all restaurants, bars and shops that do not sell groceries must close, as well as cinemas, theaters, fitness centers and service providers such as hairdressers, the canton said.

Geneva hospitals are preparing to airlift patients to other Swiss hospitals after a sixfold spike in hospitalizations over the last two weeks.

In Valais, a shortage of beds meant hospitals were having to turn patients away from intensive care units, the Neue Zürcher Zeitung newspaper reported.

France has promised to protect the nation's beloved independent shops that fear losing their business to international giants, such as Amazon, during the country's second lockdown.

Non-essential stores have been ordered to close for at least 15 days, to the protest of business owners and local officials.

Mayors in about 50 cities and towns brought in local edicts allowing shops to remain open, with even Paris mayor Anne Hidalgo saying she would do the same for book stores.

In Greece, the daily COVID-19 cases surpassed the 2,000 mark for the first time since the pandemic began.

The government has imposed new lockdown measures from Tuesday which will include bars, cafes, restaurants and gyms being shuttered across the nation.

The new restrictions are set to be in place at least till the end of November.

Read more: Belgium hospitals on the brink as caseloads soar

Austria will see a partial "second lockdown" from Tuesday that will see restaurants, bars and recreation venues close and people required to stay home from 8 p.m. to 6 a.m., though they can go out for work and exercise.

Chancellor Sebastian Kurz said the measures will last through November but will be more lenient than those in the first lockdown as schools, non-essential shops are allowed to remain open.

Huge crowds have attended the funeral for the head of the Serbian Orthodox Church in Montenegro in violation of coronavirus curbs.

Thousands gathered outside the main temple in the capital, Podgorica, for the liturgy and the burial of Bishop Amfilohije inside the church crypt.

Authorities said the bishop died Friday after contracting the virus weeks ago.

In a sign of his popularity, thousands have paid their respects since Saturday, and many kissed the bishop's remains, lying in an open casket, prompting an appeal from doctors to close the coffin.

Portugal has announced lockdown restrictions for 70% of its population, slated to begin on Wednesday. As many as 121 municipalities across the country will be put under partial lockdown.

These include Porto and capital Lisbon, which have registered over 240 new infections per 100,000 people within two weeks. Schools will continue to remain open while outdoor markets and events are banned.

Following 14,777 new infections in Germany, according to statistics released Sunday by the Robert Koch Institute, the German health agency for disease prevention and monitoring, the country's partial lockdown is set to start on Monday.

Germany has recently seen a spike in cases and the weekend tallies are generally lower as not all health offices report their counts on Saturdays and Sundays.

Two top officials in Turkey who work closely with President Recep Tayyip Erdogan have tested positive for coronavirus. On Saturday 2,213 new COVID-19 cases and 75 deaths were reported in the country.

Speaking at a campaign rally in Michigan, he warned voters that his Democratic rival Joe Biden would mimic those tough measures.

Meanwhile, the US government's top infectious diseases expert says the country should prepare for "a whole lot of hurt'' in the weeks ahead due to surging coronavirus cases.

Dr. Anthony Fauci told the Washington Post that the US "could not possibly be positioned more poorly" to stem rising cases as more people gather indoors during the colder fall and winter months.

Fauci, who is on the White House coronavirus task force, added that he believes Democratic presidential candidate Joe Biden "is taking it [the pandemic] seriously from a public health perspective,'' while Trump is "looking at it from a different perspective."

Iran says it will restrict travel to the cities hit hardest by the virus, state TV said, amid a record high of daily Covid-19 deaths.

The curbs will prevent residents from leaving and non-residents from entering based on vehicle plate numbers, but do not apply to public transport, it added.

They apply to the capitals of 25 provinces considered "red" — the highest level on Iran's color-coded risk scale — and includes the capital Tehran with more than 8 million residents.

The measure takes effect on Monday and will last until Friday.

Lebanon has lengthened a nationwide nighttime curfew and placed a number of towns and villages under total lockdown.

The Interior Ministry's decision Sunday increases the curfew by four hours, asking people to stay off the streets and shops to close between 9 p.m and 5 a.m local time. It did not set an end date.

Australia has recorded no new locally transmitted cases for the first time in five months.

In Melbourne, which had the most cases in the country, people were seen enjoying the first weekend of restaurants and pubs taking in walk-in customers.

He, however, asked the residents to remain cautious ahead of the Melbourne Cup, Australia's famous horse race, which begins on Tuesday.

How has the pandemic changed young peoples’ lives?