Coronavirus: Belgium's hospitals on the brink as caseloads soar 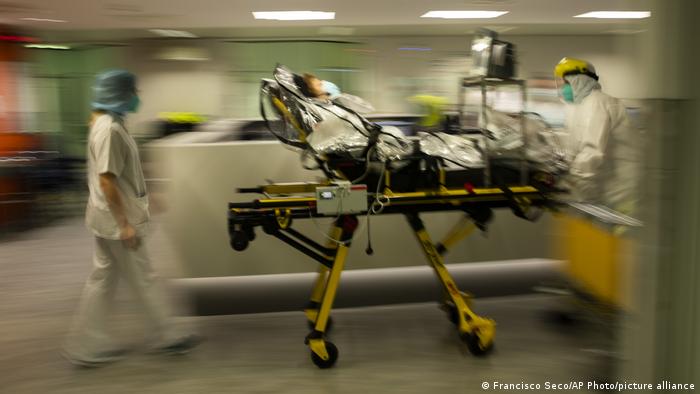 Belgium has less than 10 days to curb the spread of the coronavirus or it will no longer be able to cope, the chief of the country's association of medical unions said. Another daily caseload high was registered on Saturday.

The national health authority reported that more than 21,000 cases were recorded on Thursday — the most recent day for which consolidated figures were available.

On Friday Belgium's government announced that it would be tightening restrictions on public life.

And Dr. Philippe Devos, the president of the Belgium's association of medical unions, told DW that, if the numbers were to continue to increase, then within "10 days there will be only one bed remaining — and two patients. And the doctors will have to choose which one of the two patients will be able to be in the only bed we have."

In this scenario, the medical expert hoped that patients would be transferred to Germany. But the situation there is looking grim, too, with Chancellor Angela Merkel warning that "if infections continue at this rate, we will push our health system to its limit."

The German member of the European Parliament and physician Peter Liese said the EU had "underestimated" the threat of COVID-19 as some states' health care systems are just days from collapsing.

Liese, the public health spokesman for the EU legislature's center-right European People's Party bloc, told media outlet Deutschlandfunk that "reducing contacts" was the only way to overcome the crisis.

A member of Merkel's Christian Democrats, Liese said the EU — under guidance from European Commission President Ursula von der Leyen — was now operating "much better" than when the first wave hit in the spring, particularly in terms of the potential acquisition of vaccines for the 27 member states.

Liese said "reducing contacts" was the only way to avoid overloading the European Union's health systems but added that "regrettably Belgium and the Czech Republic are too late, so that the health systems there are already overloaded."

On Friday, Belgian Prime Minister Alexander De Croo announced that from Monday all nonessential shops will have to close for at least one month. The Czech Republic has extended its state of emergency to November 20.

With a population of about 10.7 million people, the Czech Republic has one of the fastest-growing infection rates in the European Union, while Belgium has the most coronavirus cases per capita in the world.

Belgium's COVID-19 health care collapse: 'It will happen in 10 days'

More than 300,000 of Belgium's 11 million people have COVID-19 right now. The president of Belgium's medical union tells DW how desperate and precarious the country's health system has become.

Most countries are reporting more and more new COVID-19 cases every day: Data for the global picture shows that the pandemic is far from over. DW's weekly statistics update.

German Chancellor Angela Merkel has announced tough new measures from Monday, November 2, in an attempt to curb the spread of the coronavirus pandemic. But will the German people be compliant?