Belgium's COVID-19 health care collapse: 'It will happen in 10 days'

More than 300,000 of Belgium's 11 million people have COVID-19 right now. The president of Belgium's medical union tells DW how desperate and precarious the country's health system has become.

On October 29, Belgium recorded its highest daily infection number on record: more than 20,000. The epicenter is Liege, where surrounding boroughs have seen more than 10% of the population infected. DW spoke with Philippe Devos, the president of Belgium's association of medical unions, who works as an intensivist in the critical care unit at the CHC Montlegia hospital (pictured).

DW: Dr. Devos, how many people have COVID-19 at CHC Montlegia?

And how many doctors are in there treating them?

And how many of those doctors have the coronavirus right now?

So you have doctors, right now, in hospitals here in Liege, who are working — even though they have the coronavirus?

Yes, they are infected, but not sick. So they don't have COVID-19 disease. They are like you and me, asymptomatic. But we don't have any solution anymore. We are forced to ask them to work, if they agree, only in COVID-19 wards in order not to infect other patients. And it's now the rule in the whole country. The ministry of health passed this rule yesterday.

So even though these doctors and nurses are asymptomatic, doesn't that mean they can increase the viral load of the patients they're caring for?

Actually, they're authorized to work only if their own viral load is low. So they must be asymptomatic with a low viral load. This means that they cannot increase the viral load of a patient.

Are you sure about that? What is the risk if I'm a patient with COVID-19 and my doctor or nurse comes in to treat me, and even though they're asymptomatic, they're breathing out virus (maybe through their mask somehow). Couldn't I get more of a viral load that way?

So we are not silly. They are using FFP2 masks, and they know how to wear them to not let the virus get out. So they use protection everywhere they go in the hospital. And when they have to remove their mask for eating, for example, they have to do it in a specific room that is washed every hour – to not disseminate their own virus. The only other solution is not to admit a patient into the hospital. They are forced to choose between dying, or being treated by a "positive" doctor. All the patients are choosing not to die. 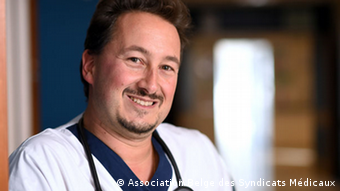 Devos is the president of Belgium's medical union

Are you and your colleagues afraid for your lives?

For my own life, of course not. Because I was infected in April. But some of my colleagues are frightened for their own lives. And it's a problem, because we have many doctors that are more than 60 years old. They are very frightened about that. So we try to send them in non-COVID wards, and to send younger doctors in COVID wards.

If I'm sick, or in need of medical attention here in Belgium, is it possible that I can't come to a hospital right now because of this situation?

Last Monday, there was a medical helicopter that came to a car crash. And he asked for a place in a hospital. And all the hospitals refused to receive him. So he decided to go to the closest hospital, and he gave the patient without authorization. He was forced to do it. So we are in a very difficult situation at this time in Belgium.

The numbers are going up, they will probably continue to go up when it comes to COVID-19 infections. When will this implode?

Mathematical models are saying that it will happen in 10 days. So, in 10 days, we will have only two choices available: Transfer patients to Germany and hope we won't do triage…. or we'll have to do triage. [That means] there will be only one bed remaining, and two patients. And the doctors will have to choose which one of the two patients will be able to be in the only bed we have. That's triage. Usually, it's done in terrorism, in war, in catastrophes like a nuclear explosion.

You've been working for many years, in your position. Now you're confronted with… this. How do you feel?

Sad. Sad because I've hoped now, for six months, that it would never happen. That people would have understood the risk. And that people would have changed their habits for one year. Just to avoid that. But it's a failure of the solidarity between people in Belgium — and a question of balance between solidarity and individual rights. Some people choose their own rights compared to solidarity. And the result is now here. I've seen people dying and regretting that they didn't wear the mask. I saw that. I saw families that had big parties with all the family members. And all the family members were infected. And I've got a family right now where 80% of the family is in the beds here. Right now, just after a birthday party. That's what I'm seeing now. But the danger now in Europe is everywhere. If people don't take hard measures soon, then you will live a nightmare like we are living right now.

What are you going to do when Germany says, "We don't have space anymore."

We will work until we run out of nurses.

Philippe Devos is the president of the medical union of Belgium. He works at the CHC Montlegia hospital as an intensivist in the critical care unit. He is also a member of the Standing Committee of European Doctors.