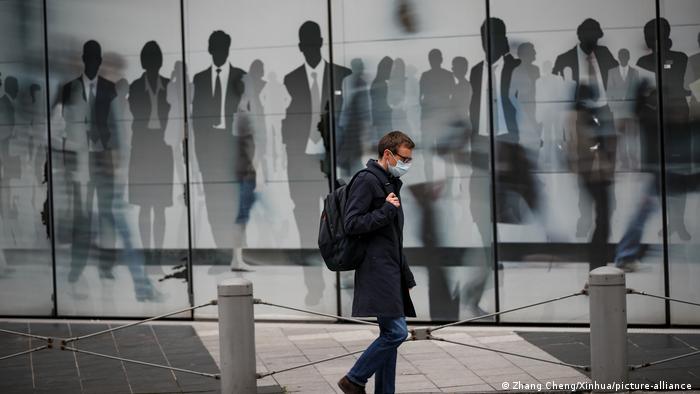 Arias runs Cadre Noir, a bar in Brussels' Schaerbeek neighborhood. Today, he's clearing chairs from the patio out front. Belgium has imposed strict new rules to combat the recent spike in coronavirus infections, which means all restaurants and bars must shut for the next four weeks. It will be a tough time for Arias and his family, and for his regulars.

"That's it — you have to close now, right?" an elderly patron asks. "That's what the government ordered," Arias tells the man. "For four weeks, but who knows."

Arias, who doesn't want to reveal his full name, is skeptical of the new measures. "They are taking action, without knowing what it will achieve," he says, adding that he thinks politicians are simply panicking.

He's disappointed: restaurateurs invested a lot of money over the summer installing plexiglass dividers and outdoor tents, so patrons could sit outdoors to minimize the infection risk. He says authorities have promised some financial compensation, though he expects it will arrive too late and hardly be enough to cover the rent. Will his business survive a second lockdown? "Hope springs eternal," he says.

A wine bar further down the street already shut up shop a few days ago, hanging a simple sign in the window that reads "Sorry, closed." Across the street, an upscale brasserie often frequented by those who work in the nearby European quarter has shut its doors as well.

Elsewhere, some restaurants and bars have already been converted into other businesses. An old bar that serves traditional fare in the city center, for example, has been transformed into a junk shop. The barman is still cleaning the taps. "We won't be using these for a while — or maybe never again," he says.

Dark clouds on the horizon

Belgium is facing a sharp rise in COVID-19 infections. Between October 9 and 15, an average of 7,900 new cases were recorded per day. Almost 2,500 coronavirus patients have been hospitalized, and 400 are in intensive care.

"We are really very close to a tsunami," warned Belgian Health Minister Frank Vandenbroucke on Sunday, speaking with broadcaster RTL. He said the French-speaking region of Wallonia and the capital, Brussels, were Europe's worst-affected regions. "We are still in control of the situation, but it's very difficult," he said, adding that things could soon get out of hand.

Vandenbroucke acknowledged that health care workers were under tremendous pressure and said that if infections continued to rise, non-essential medical procedures would have to be postponed.

Belgians must wear face masks in shops and when using public transport, and now they've been urged to restrict their contacts to only one person outside of their immediate family. "This virus is nobody's fault," said Vandenbroucke, countering accusations that young people are to blame for the second coronavirus wave. "It's up to all of us to get this situation under control."

The Belgian government has said that those who can should work from home. Ordinary shops, museums and schools, however, are to remain open. "We do not want to bring life to a total standstill," said Vandenbroucke. "We face two enemies, after all: the virus and loneliness, depression."

A Belgian family who lost a loved one to COVID-19

Belgium's various regional and local decision-makers, however, are divided over the new government measures, making for curious inconsistencies. The southern city of Charleroi, for example, has made face masks mandatory everywhere. But in the next town over, completely different rules apply.

To ensure that the latest measures are uniformly implemented across the country, the federal government has now installed a coronavirus commissioner to facilitate communication between different levels of local government and administration.

New Prime Minister Alexander de Croo has said the situation now is worse than during the first lockdown, which began in mid-March. He said Monday that the country has three times as many people in intensive care, and hospitals are under serious strain. The situation is expected to deteriorate, said de Croo, citing projections that intensive care units could be at maximum capacity by mid-November.

Some hospitals in Brussels, as well as in Liege some 100 kilometers (60 miles) to the east, have already sounded the alarm, warning they are at maximum capacity.

At Brussels' Erasmus Hospital, it's clear the situation is already tense. On Monday, some 60 nurses and doctors briefly stopped working to draw attention to a lack of medical equipment and staff, saying the situation hasn't improved since the first wave of the pandemic in the spring.

"We are dropping like flies," one of the organizers told broadcaster RTL. Layla, a nurse, told journalists that they had to keep working even if they tested positive and had a fever. This could mean, she said, other patients and family members will get infected.

Medical staff are angry that promises made in spring have not been kept. "Back then, people would applaud every evening," said Layla. But that appreciation has not led to the hiring of additional nurses. Jean-Michel Hougardy, the medical director at Erasmus, is on their side. "We need to hire more staff to care for COVID-19 patients, and for other patients, too."