Mourners in Montenegro defied anti-coronavirus restrictions at the funeral of the powerful pro-Serbia bishop Amfilohije. The cleric had died after developing pneumonia as a consequence of a coronavirus infection. 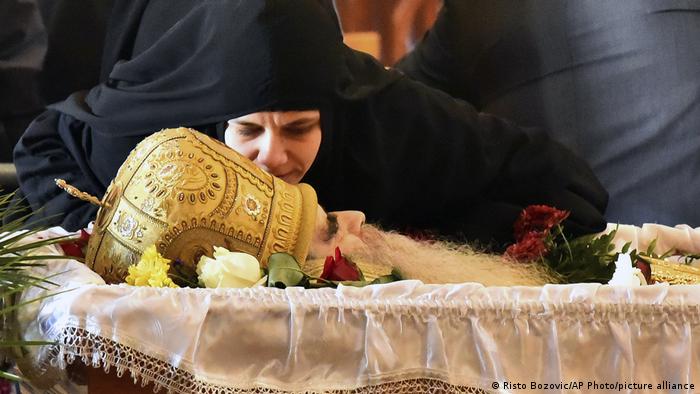 Huge crowds that gathered for the funeral of Bishop Amfilohije Radovic on Sunday largely ignored safety rules for avoiding the spread of the coronavirus, according to several news outlets.

The pro-Serb cleric had contracted COVID-19 in early October. He died of pneumonia, a frequent complication of the disease, on Friday after testing negative for coronavirus 10 days previously.

Nevenka Pavlicic, the head of the Montenegrin hospital where Amfilohije died, had urged authorities to ban his open-casket funeral, describing it as a "lair of the disease." Doctors had urged that the coffin be closed to crowds.

An earlier report by DW that suggested mourners may have been exposed to potential coronavirus infection by kissing the bishop's remains, however, was unfounded, as the cleric had tested negative well before his death.

Nonetheless, many mourners were reportedly without masks and did not maintain the recommended distance to others, thus putting themselves and other people at risk of contracting the virus.

Montenegrin authorities had already been struggling to contain viral spread in the small Balkans nation of 620,000. 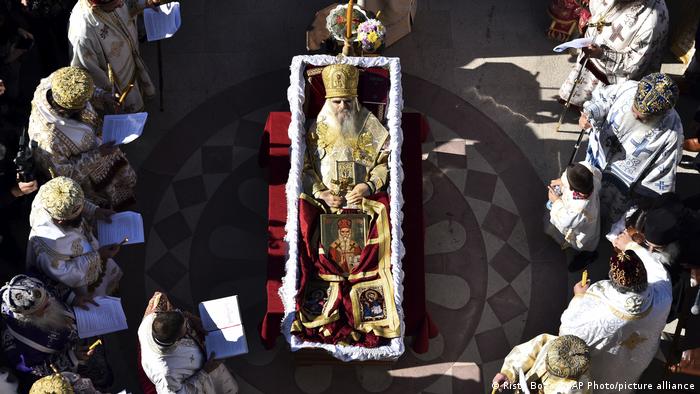 On Friday, Prime Minister-designate Zdravko Krivokapic had described Bishop Amfilohije as "one of the greatest among us in this century."

The bishop played an important role in a protest movement against President Milo Djukanovic. He also backed opposition parties in an August election that saw Djukanovic's opponents win a majority.

Montenegro shares strong ties with neighboring Serbia and about one-third of the population consider themselves Serbian. The state aims to enter the EU and is currently aligned with NATO.

In May, on a pilgrimage to a monastery near Podgorica, Amfilohije had described the worship of the 17th-century bishop St. Vasilije Ostroski the Miracle Maker as "God's vaccine."

"It would be good if contemporary scientists invent the vaccine … but before it is found … there's a vaccine here which has acted throughout the centuries," he said.

Amfilohije had often appeared in public without a face mask and, along with other clerics, had been briefly detained for leading liturgy in violation of health guidelines. He had also defied an anti-coronavirus ban on public gatherings, leading marches against the controversial law on religion.

The Johns Hopkins monitoring center in the US reported 373 new coronavirus cases in Montenegro on Monday.

The Balkan state, it said, had recorded a total of 313 deaths and 18,714 cases since the global pandemic emerged early this year.

This article has been amended to correct the impression given in an earlier report that mourners had put themselves in danger by kissing the bishop's corpse. DW would also like to retract statements suggesting that Amfilohije-led protests focused on the coronavirus lockdown, although the marches were held in spite of a ban on public gatherings. Instead, the protesters were marching against a controversial law on religious property. DW apologizes for the errors.

In Montenegro, the ruling DPS was nearly neck-and-neck with its main rivals, according to the latest official tally. The campaign was dominated by tensions with the Serbian Orthodox Church.

The two Balkan countries have not been included on the EU's revised travel list due to a spike in COVID-19 cases. Meanwhile, Russian hackers have been accused of targeting vaccine research. Follow DW for the latest.

Will the Balkans become a new coronavirus hotspot?