The US will reinstate the travel ban on non-citizens coming from Brazil and most of Europe, according to White House sources. The restrictions will also apply to travelers from South Africa. Follow DW for the latest. 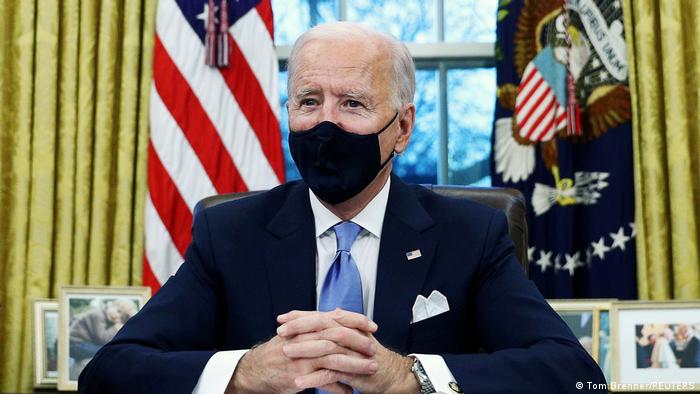 US President Joe Biden will renew the COVID-19 travel ban on most non-US citizens who have recently been in the European Union, the UK, and Brazil, a senior White House official said Sunday.

The ban will come into effect on Monday and will be extended to travelers who have been to South Africa, amid warnings that a new, more transmissible coronavirus variant was spreading in the US, the official said.

Former President Donald Trump had announced in the last days of his term that travel restrictions from much of Europe and Brazil would be lifted.

But the Biden administration said it would reverse the order.

"We're in a national emergency. It's time we treated it like one," Biden said on Thursday.

Australia's medical regulator formally authorized the use of the BioNTech-Pfizer vaccine, making it the first COVID-19 vaccine to get the green light in the country.

The first doses are expected to be administered in late February, Prime Minister Scott Morrison said.

Australia has an agreement for 10 million doses of the two-dose Pfizer vaccine and an option to buy more if supplies allow. Health Minister Greg Hunt said Monday the country overall had secured 140 million vaccines, one of the highest dosing rates per head of population in the world.

The country is aiming to complete the vaccination program by October.

New Zealand's first case of coronavirus in the community for more than two months has been identified as the South African variant, Health Minister Chris Hipkins said Monday.

Authorities believe that the woman may have been infected during quarantine by a person on the same floor of the hotel who tested positive two days before she left.

The 56-year-old tested positive on Saturday, 10 days after completing her mandatory two weeks in isolation.

"She didn't talk about respiratory symptoms, it was more muscle aches, so she may not have been sharing or spreading the virus much," Hipkins said. "I don't think that's peculiar to this variant, it's just how it was expressed in this woman."

The Hong Kong government lifted the lockdown in its Kowloon district on Monday after testing about 7,000 people. Authorities set up 51 temporary testing stations and found 13 cases of coronavirus in the area.

The city's government said that hopefully "this temporary inconvenience will completely cut the local transmission chains in the district and ease residents' worries and fear" so they can return to a normal life.

Mexican President Andres Manuel Lopez Obrador announced on Sunday that he had tested positive for coronavirus, adding that his symptoms were mild, and he was receiving medical treatment.

"As always, I am optimistic. We will come through this together," Lopez Obrador said on Twitter.

He also said he would speak with Russian President Vladimir Putin on Monday about obtaining doses of the Sputnik V COVID-19 vaccine.

The 67-year-old has resisted wearing a face mask in public since the virus arrived in Mexico 10 months ago. "I'll put on a mask. You know when? When there's no corruption," he said in July. He had said that not lying and stealing would protect him from the virus.

France is mulling a third lockdown due to the new variants of the coronavirus, the government's top medical advisers said on Sunday.

"We probably need to go towards confinement. Whether that needs to be very strict confinement like the first one in March or a softer form like in November, that is a political decision," said Jean-Francois Delfraissy, head of the scientific council that advises the government on COVID-19 response.

France went into lockdown twice in 2020, the first time between March and May and then October to December

The Netherlands' first night of curfew aimed at slowing coronavirus infections was met with widespread protests and rioting, police said on Sunday.

Israel will be closing its international airport to nearly all flights for a week, Prime Minister Benjamin Netanyahu announced on Sunday.

"We are closing the skies hermetically, except for really rare exceptions, to prevent the entry of virus mutations, and also to ensure that we progress quickly with our vaccination campaign," he said.

Meanwhile, Israeli police clashed with ultra-Orthodox protesters in several major cities and the government raced to bring a raging coronavirus outbreak under control.

Israel has so far vaccinated more than 2.5 million of the nine-million-strong population.

The government in Rome has said it's planning legal action against pharmaceutical companies Pfizer and AstraZeneca over delays to the delivery of new coronavirus vaccines. The European Union has made a similar threat.

The economic crisis has trapped many in Russia's small business sector with debt. But state corruption means few small and medium-sized businesses have an incentive to grow.