Japan's PM Shinzo Abe has declared a state of emergency for Tokyo and six other cities to stop the spread of SARS-CoV-2. Critics say the measure has come "far too late." Julian Ryall reports from Tokyo. 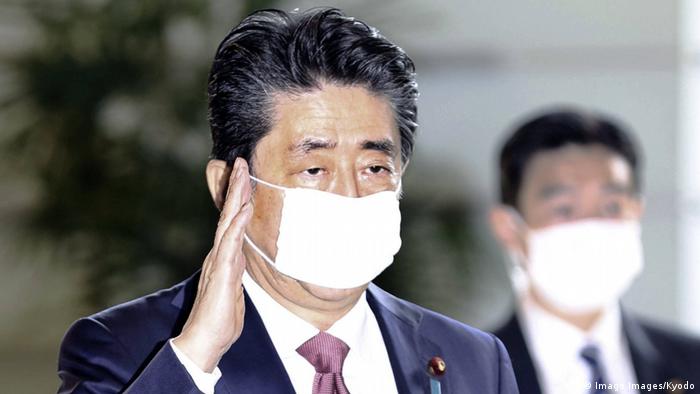 Japanese Prime Minister Shinzo Abe on Tuesday declared a state of emergency in the nation's most densely populated regions in an effort to halt the spread of the novel coronavirus. The PM's announcement is the first of its kind in Japan and grants new powers to mayors and prefectural governors to implement new and more rigorous measures to curb the illness.

The state of emergency goes into effect at midnight local time, the prime minister said, and is initially due to last until May 6, although it may be extended if there is only a limited impact on the spread of the illness and infection and death rates.

"I have decided to declare a state of emergency because we have reached a point at which the spread of infections has become rapid and widespread across the country and is threatening to have a grave impact on people's lives and the economy," Abe said in an address to the Diet in Tokyo.

Health authorities have recorded a relatively limited number of cases across Japan, with just over 4,800 cases and 108 fatalities to date. The government was prompted to act, however, after a spike in reported cases in Tokyo over the weekend. A record 143 new infections were reported in the capital on Sunday, up from 118 the day before, and triggering concern that the virus might be making inroads into the city and surrounding prefectures, which are home to 38 million people.

Under the new regulations, which will cover the cities of Tokyo, Osaka and five neighboring prefectures, mayors and prefectural governors will have the power to shut down schools and other public facilities, as well as large stores, cinemas, game centers and sporting and cultural venues. People are being asked to stay at home unless they need to go shopping or to visit a doctor, although — significantly — anyone failing to comply with the requests will not be subject to punishment and the authorities are aiming to harness peer pressure to apply a "soft lockdown."

The regulations fall short of the drastic lockdown measures that have been introduced in a number of other countries, but most Japanese say they assumed the rules would be coming and already have made adjustments to their daily lives. And they welcome the prime minister's initiative, insisting that the new rules are largely "common sense" and will not have much impact on their new ways of life.

Read more: As the coronavirus triggers a global economic crisis, just how bad could it get?

"I've not been going out in the evenings for quite a few weeks now and I have been limiting the amount of time that I go out during the daytime as well," said Koichi Ishiyama, a retired university professor.

"I've just come back from the shops and I'm glad to be able to say that I saw no signs of people panic-buying," he said. "From now on, I intend to go for a brisk walk once a day, because they say it's important that people still get exercise and go shopping for food only when we need to.

"I'm 73 years old, so I guess that puts me in a higher-risk category when it comes to this virus, so I'm doing what I can to stay safe and well," he added. "I suppose I am a little frightened — we can't see this virus and we don't know if anyone around us has it — but I think that if we use common sense and keep a good distance from other people, then we should be OK."

The government has previously resisted the introduction of a state of emergency — citing the relatively slow spread of the illness and voluntary efforts by the public to limit contact with other people and avoid large gatherings — in part out of concern about the impact even a partial shutdown might have on the national economy.

Analysts at Tokyo's Waseda University have suggested that a shutdown of the Tokyo metropolitan district for a period of one month would cost the nation a 5% slump in GDP, worth approximately €222.8 billion ($242.2 billion).

Tokyo and the neighboring prefecture of Saitama, Chiba and Kanagawa account for fully one-third of the nation's total economic output, while Osaka is the nation's second-biggest city and an important business and industrial center.

The spike in cases over the weekend, however, plus the scale of the pandemic in the United States and a number of European nations, has apparently convinced the prime minister to act.

But critics have taken issue both with the timing of the government's announcement and the official figures for coronavirus infections. Some have said the official figures of cases are likely to be well below the actual figures as a mere 46,172 tests for the virus have been conducted in a nation of 126.8 million people.

Experts say the government's declaration has come too late, with Tetsuya Matsumoto, an expert on infectious diseases at the International University of Health and Welfare, telling the Mainichi newspaper that it has come "two weeks too late." He added that he anticipates a sudden surge in the number of people visiting hospitals because they believe they have the symptoms associated with the illness, a development that might serve to spread the virus more dramatically.

Opposition politicians have also condemned the government for acting "far too late" and demanded support for workers and businesses that will be "paralyzed" by the announcement.

After weeks of ambivalent coronavirus crisis management, Japan's government said it will close every school in the country. Critics said the move is based more on politics ahead of the Olympics than public health. (28.02.2020)

The International Olympic Committee (IOC), has confirmed that the 2020 Summer Olympics in Tokyo have been postponed for a year after IOC President Thomas Bach agreed to a request from Japanese Prime Minister Shinzo Abe. (24.03.2020)