Coronavirus: Are Japan′s school closures a political move to save the Olympics? | Asia | An in-depth look at news from across the continent | DW | 28.02.2020

After weeks of ambivalent coronavirus crisis management, Japan's government said it will close every school in the country. Critics said the move is based more on politics ahead of the Olympics than public health. 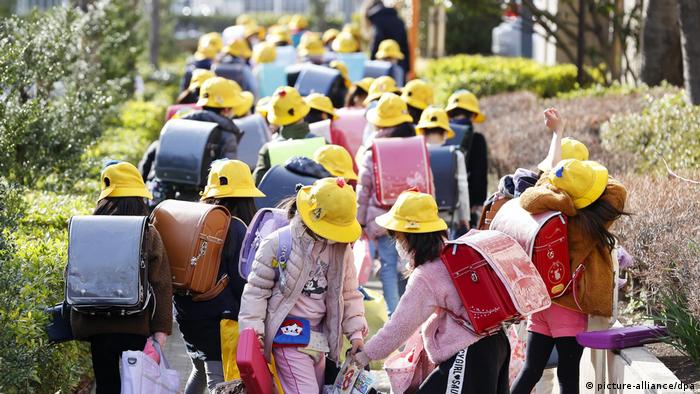 On Thursday evening, many Japanese families were caught off guard by the news that all of Japan's elementary, middle and high schools will close for a month starting Monday as part of a bid to stop the spread of the disease COVID-19.

The government said Japan's 13 million students will return to classes after spring break at the beginning of Japan's new school year in April. The sudden and drastic step has shocked Japan, and left teachers, businesses and parents wondering with how to deal with the children.

There has so far been little word from officials on how the plan is to be implemented. Japanese Prime Minister Shinzo Abe is due to hold a press conference Saturday.

In announcing the measures Thursday, Abe said the health and security of the country's children has the highest priority. However, there has not been any evidence provided from public health officials that the virus is spreading among children.

The move is a drastic turnaround for Abe, who has managed the COVID-19 crisis up to now with a mix of disinterest and complacency.

The premier has been seen leaving meetings of crisis teams after only a few minutes. Japan's borders have remained open for Chinese citizens who didn't come from the virus' epicenter in Hubei province. To prevent the virus from spreading, Abe has merely suggested that people work from home and avoid large crowds.

"The absence of political leadership was noticeable," said Sebastian Maslow, a Japan expert at the University of Tokyo.

Japan currently has registered over 200 cases of COVID-19 infections. Five of the cases so far have been fatal. This number doesn't count the 705 cases on the Diamond Princess cruise ship that has been quarantined in Yokohama harbor for over two weeks.

Japanese passengers who tested negative for the disease COVID-19 were allowed to disembark and take the train home. Other countries like Germany and the US quarantined returnees from affected areas for 14 days.  Japanese health officials who were on board the ship were not tested afterwards.

The Olympic games must go on

It seems Abe and his cabinet were jolted into action after the Canadian vice president of the International Olympic Committee (IOC), Dick Pound, recently said that Japan has until the end of May to decide whether to go ahead with hosting the summer Olympic Games in Tokyo.

Delaying the games, which are due to begin on July 24, would be out of the question due to television rights and athletes' schedules, said Pound.

Following the IOC's announcement, Abe jumped into action and began to call off or postpone big public events taking place during the next two weeks. 14 days is the virus' incubation period.

Now businesses are calling off conferences and trade fairs, museums are closing and sporting events are being canceled.

On the same day Abe made these announcements, Japan's Olympic chief, Toshiro Muto, ensured that the games would take place. The torch relay across Japan will start as planned on March 26 in Fukushima, he said.

IOC President Thomas Buch told Japanese media that the committee is "fully committed" to beginning the games on time.

Despite the positive response of the IOC, the rapid spread of the disease COVID-19 around the world has raised concerns internationally as to whether Japan is doing enough to counter the virus.

Although there are cases spread across the country, the numbers of new cases are hardly increasing. This has raised suspicions that the reported cases are only the tip of the iceberg.

"For every person who tested positive, there are probably hundreds of untested people with mild symptoms," Masahiro Kami, head of the Medical Governance Institute in Tokyo, told Bloomberg news.

This is because, unlike in South Korea, there is hardly any testing taking place in Japan. One reason is that potentially ill patients must meet several conditions, such as a prolonged fever, in order to be tested.

These criteria are most likely in place to prevent panic, protect the healthcare system and save costs.

Some hospitals have refused requests for tests, fearing that they will have to quarantine patients.

Japan's Health Minister Katsunobu Kato told Parliament that between February 18 and 23, only 5,700 COVID-19 tests were carried out, including those on the cruise ship.

Opposition parties have been criticizing Abe's wavering crisis management and closing schools could show that Abe is willing to be decisive.

However, due to the move, many parents are now being forced to take time off work to take care of their children. Many people have taken to Twitter and criticized Abe. He has also caused anger and confusion within the ranks of his own party. Education Ministry officials said the decision was a bad idea.

"Who will take care of the younger elementary school children? A nationwide school closure poses so many problems that it cannot possibly be an option," said an outraged senior official, adding that Abe has not provided a convincing medical justification for the school closures.

"He wants to regain lost confidence in his role as a crisis manager," said political analyst Maslow.

Some observers have compared the lack of action by Abe's government to the handling of the 2011 Fukushima nuclear disaster, which forced then Prime Minister Naoto Kan to resign.

It looks like Abe now wants to avoid this fate. However, his unexpected turnaround in policy is threatening to raise the level of panic.