Cologne′s historical archive faces a long road back | Germany | News and in-depth reporting from Berlin and beyond | DW | 13.04.2009

Firemen, archivists, restorers and volunteers are working to save Cologne's historical archive. About half of the documents have been pulled from the rubble, but now more work must be done to preserve the material. 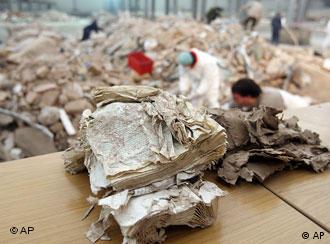 Books are sometimes found in mint condition, and sometimes ripped to shreds

For the past several weeks, more than 60 firemen and volunteers have been spending most of their days at the site where the archive once stood. With scoops, cranes and even their bare hands, they search through the rubble not for bodies, but for paper.

That is because the documented history of the entire region now lays buried under 60 tons of rock and other debris.

"Today we just found a document from the 11th century," said Cologne fireman Thomas Buergermann. "This is what we are doing, looking and searching for archival material, 12 hours a day every day, with the exception of Sunday."

Since the collapse of the archive building on March 3, workers have been present at the site. They plan to stay until the last document has been uncovered.

"We'll do this job until the last historical items have been found, said Johannes Feirer, Cologne's deputy fire chief. "I think that we have already recovered more than half of the historical materials," he said.

Workers and volunteers have been at the site non-stop

A "safe haven" for uncovered documents

The archive materials are being brought to a furniture warehouse located about 20 kilometers outside of Cologne. As soon as the firemen find something they believe to be of significance, they record exactly where in the rubble they found the item, pack it in a box, and ship it to the furniture warehouse in Porz, one of the city's suburbs.

In the long halls of the warehouse, there are hundreds of boxes full of random parchments, scrolls, papers, and books. Some are clean and dry, others dirty and wet. Dressed in white plastic suits and wearing hoods and protective masks, archivists, restorers, and volunteers from the Rhineland and beyond have come here to begin the mindboggling task of preserving and organizing the recovered materials.

The archivists and restorers are especially concerned with water-damaged documents. For once the document begins to mold, the chance of preserving it is next to none. Archivists use dry ice to freeze documents before they can begin the long process of being restored.

Documents that were exposed to water while buried under the rubble must remain frozen for months before being dried. This is the only way to prevent mold from forming.

Max Plassman, one of four main archivists responsible for the preservation of the recovered documents, said this process would be unthinkable without the help of volunteers.

"We have to stress the fact that most of the work here is done by volunteers," he said. "It is a very important fact for us, because we couldn't handle this process on our own. They are turning up daily by the hundreds here. It's unbelievable."

Crucial to the Rhineland

For the historians of the Rhineland, the archive collapse is especially devastating. For the region's universities, the preservation of recovered documents is absolutely critical.

"You have to understand that the history of our region, the Rhineland, is influenced very much by Cologne, which was and is the largest city in the area," said Andreas Rutz, an assistant professor of history at the University of Bonn.

"We have a number of PhD students working on Cologne subjects. They're writing their dissertations on the history of Cologne. For them above all it's a big catastrophe. They have no chance of actually finishing their dissertations the way they planned to. So for them it would be great, if these things were found. Because then they would be able to continue."

One month after the collapse of Cologne's historic archive, German police have raided offices across Germany and seized documents relating to the construction of a subway line in the city. (31.03.2009)

The archive in the 2,000-year-old western German city has 50 kilometers worth of shelf space to house historical documents and artifacts. The old building collapsed in 2009 in a subway construction accident.

Women with disabilities in Germany face double discrimination at university 03.07.2021

According to a UN convention signed by Germany, persons with disabilities have a right to equal and full access to public life, including university education. Three female academics tell DW how this is far from reality.