Climate change: Millions of hectares of tropical forest destroyed in 2018

A study found that the world lost an area of tropical forest roughly the size of England in 2018, equal to about 30 soccer fields every minute. The implications for efforts to fight global climate change are dire. 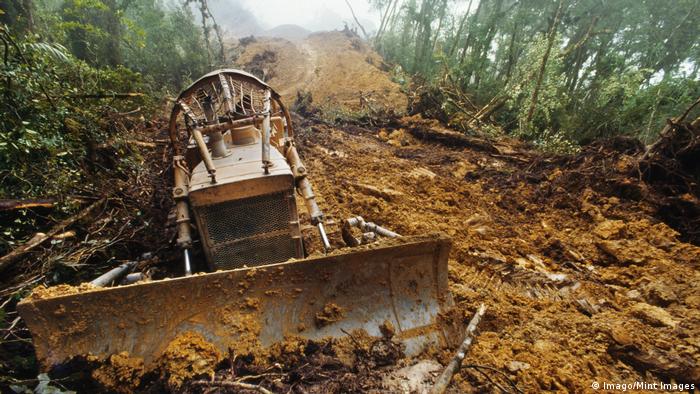 Humanity destroyed some 12 million hectares (30 million acres) of tropical forest in 2018 — almost a third of which was pristine rainforest.

That was the finding of scientists from Global Forest Watch, whose study, published on Thursday, showed the third-largest decline since global satellite data became available in 2001.

Failure to stop tree cover loss has major implications for climate change, they warned, limiting the ability of the planet to soak up carbon emissions.

"The world's forests are now in the emergency room," said Frances Seymour from the World Resources Institute, the research organization responsible for the study.

"The health of the planet is at stake, and band-aid responses are not enough," Seymour said. "With every hectare lost, we are that much closer to the scary scenario of runaway climate change."

A quarter of tropical tree cover loss took place in Brazil alone, with the Democratic Republic of Congo and Indonesia both accounting for about 10%. There were also high levels of deforestation in Malaysia and Madagascar.

For the first time, researchers were able to calculate the loss of undisturbed natural rainforest using satellite data. They found that much of the loss — an area about the size of Belgium — occurred in primary rainforest, with mature trees that absorb more carbon and are harder to replace.

Almost a third of primary rainforest loss was in Brazil, with DR Congo, Indonesia, Colombia and Bolivia next in line.

New deforestation hot spots were revealed, particularly in Africa, where illegal mining, small-scale clearances and cocoa farm expansion led to notable tree loss in countries such as Ghana and the Ivory Coast.

The study revealed at least one positive. In Indonesia, primary forest loss slowed for the second year running, dropping by 63% compared to 2016. This happened after the government imposed a moratorium on forest-clearing.