Deforestation triggering natural calamities in Indonesia | Asia | An in-depth look at news from across the continent | DW | 27.03.2019

Palm oil production in Indonesia has been held responsible for cutting down vast swaths of tropical forests and killing biodiversity. Now, deforestation may also be the reason why the region is witnessing flash floods. 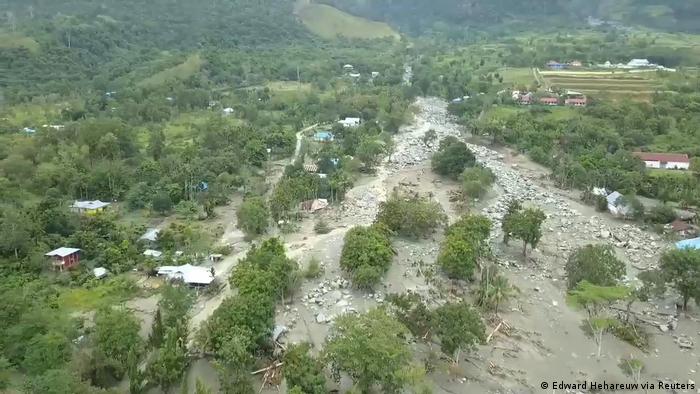 Recently, Indonesia was struck by massive floods. After hours of heavy rain in the Sentani area in the province of Papua, flash flooding and landslides killed nearly 90 people and injured 150.

National Disaster Management Agency (BNPN) spokesperson Sutopo Purwo Nugroho said the rain had been extremely heavy, reaching 235.1 mm per hour. "Deforestation of the mountain was getting worse because people cut down trees for firewood and to open illegal plantations," he said.

Indonesian Forum for Environment (WALHI) in Papua province also indicated that the flash flood was caused by deforestation. The organization's head, Aiesh Rumbekwan, explained: "We can see from the logs carried away by the current that the trees were not carried by the slides. They were cut down. This is very clear. So we assume that there was logging above." 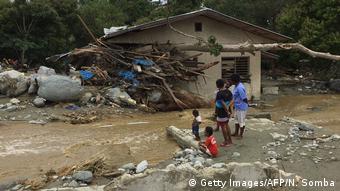 Floods damaged a house in Sentani, near Jayapura

According to environment watchdog Greenpeace, opening up lands for big plantations for growing oil-producing palms, has been the main cause of deforestation in Indonesia. Last year, the group published the results of an investigation, which revealed that 25 palm oil-producing companies were responsible for denuding 1300 square kilometers of forest cover in Indonesia since 2015.

Greenpeace also highlighted several negative impacts of palm-oil plantations on the environment, humans and the climate. Among others, half of the orangutan population in Kalimantan, the Indonesian part of Borneo, was destroyed in 16 years. Moreover, deforestation and destruction of peatlands were the main cause of greenhouse gas emissions, which contributed to climate change.

Furthermore, many products people could buy in the supermarkets contained palm oil produced by the agribusiness giant Wilmar, Greepeace said. Popular products included Kitkat, Colgate toothpaste, Dove soap and Head & Shoulders shampoo. Consequently, the organization has been asking people to sign petitions to prevent companies from buying palm oil from Wilmar. It has also criticized and demanded stricter measures from Indonesian government and sanctions for companies who break the rules.

Other causes of deforestation

According to the research, conversion of forest cover into grassland rose sharply when El Nino caused severe drought fire activity on some parts of Indonesia, particularly in 2016. The study also revealed that road construction and mining activities were important drivers of deforestation in some areas.

The research, which was led by Kemen G. Austin, also revealed that small-scale agriculture and small-scale plantations contributed to one-fifth of the loss in forest cover, not only in the big islands of Sumatra, java, Borneo and Sulawesi, but also smaller islands like Papua.

Warning is not enough

According to the Indonesian Forum for Environment (WALHI), the government has been neglecting the problem of deforestation and controls at the ground level are not working. WALHI activists said that following the warning, officials in Jayapura, the capital of Papua province, should have ensured that locals were following instructions. Other organizations like Greenpeace have also raised this issue.

WALHI Papua's Kemen G Austin and his colleagues, who have been researching forest cover loss in Indonesia for the last 15 years, pointed out that the causes were much more varied than previously thought. They also changed from place to place and over time. The researchers therefore suggested "the need for forest conservation policy responses tailored at the subnational level and new methods for monitoring the causes of deforestation over time.”

Calls for an environmentally conscious form of Islam are growing in Indonesia, as climate change poses enormous ecological challenges for the country. Experts say it could change society's approach to climate efforts.