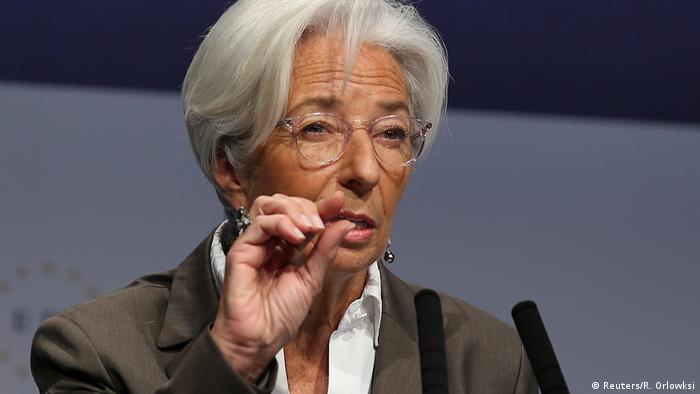 In her first major policy address in the role, she said it was vital that eurozone governments boost domestic demand as export-driven growth had stalled as a result of global trade tensions and geopolitical issues.

Lagarde told a major banking conference in Frankfurt that the eurozone economy is expected to grow just 1.1% this year — "much lower than previously forecast."

The ECB's ultraloose monetary policy would "achieve its goal faster and with fewer side effects" if euro area governments supported it with fiscal policy, she added.

The president's speech was particularly aimed at Germany, Europe's largest economy, which has resisted calls to spend more of its huge budget surpluses.

Read more: Christine Lagarde will need all her skills to steer ECB through trying times

The main points of Lagarde's speech:

While Lagarde's speech focused on fiscal policy rather than specifics about monetary policy, she has previously said the ECB plans to continue its accommodative stance of cheap credit, record-low interest rates and massive bond purchases to stimulate the economy and drive up stubbornly low inflation.

Her remarks about investment echoed those by the Organisation for Economic Co-operation and Development (OECD) which on Thursday also urged governments to loosen the purse strings.

The OECD warned that governments had not invested enough to improve their long-term infrastructure, advance new technologies or combat climate change, and that the global economy was headed for its weakest period of growth "since the global financial crisis."

Lagarde became the ECB's first female chief at the beginning of November and the fourth since it was founded in 1988, having previously served two terms as the head of the International Monetary Fund (IMF).

The former French finance minister will preside over her first meeting of the ECB's rate-setting council next month.

The ECB's governing council, however, remains divided over Draghi's final stimulus package in September, where the bank restarted its bond-buying program and cut a key interest rate deeper into negative territory.

Several council members protested that the measures were too strong and would leave eurozone banks, which were already struggling to make profits, weaker still.

Greece will exit its stability program on Monday. How has the Greek economy developed since austerity was imposed in 2010? And is Greece prepared to meet the budgetary targets? A data analysis provides answers. (19.08.2018)

The International Monetary Fund has confirmed Bulgiarian economist Kristalina Georgieva as its new head. Previously second in command at the World Bank, she's the first person from an emerging economy to lead the body. (26.09.2019)