The International Monetary Fund has confirmed Bulgiarian economist Kristalina Georgieva as its new head. Previously second in command at the World Bank, she's the first person from an emerging economy to lead the body. 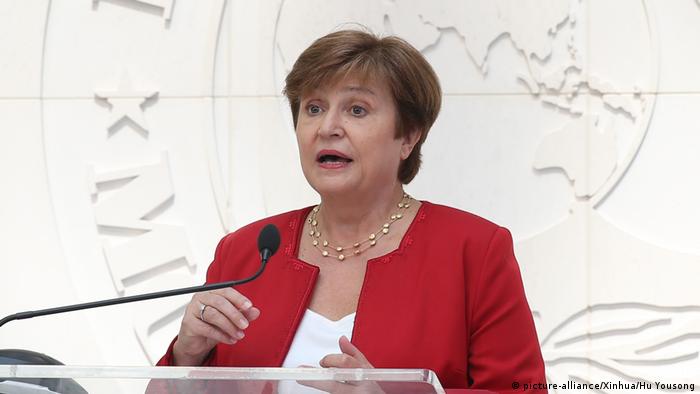 The International Monetary Fund (IMF) selected Kristalina Georgieva as its new leader on Wednesday, after she was put forward as Europe's sole candidate.

Georgieva welcomed the appointment, and flagged up the challenges that would face the organization in the near future.

"It is a huge responsibility to be at the helm of the IMF at a time when global economic growth continues to disappoint, trade tensions persist, and debt is at historically high levels," Georgieva said.

The IMF's primary role is to ensure stability in the global monetary system, often by acting as a lender of last resort to economically struggling nations. The organization often stipulates tough austerity measures on domestic populations as a condition of its help.

The 66-year-old said the IMF's "immediate priority" would be to help countries minimize risk and be "ready to cope with downturns" while supporting long-term economic stability.

Georgieva succeeds France's Christine Lagarde, who is set to becomehead of the European Central Bank. The Bulgarian was backed by French President Emmanuel Macron and won support last month from the rest of the European Union, as well as the tacit backing of the United States.

Under an unwritten rule, the IMF has been led by a European since its creation in the aftermath of World War II. Candidates to lead its sister organization, the World Bank, are decided upon by Washington.

As a center-right politician who grew up under Communist rule in Bulgaria, Georgieva built her reputation while working for the European Commission and then at the World Bank.

It was at the World Bank that she reached the level of chief executive officer, taking a leave of absence during the selection process for the IMF. She had previously been tipped as a possible successor to Ban Ki-moon as United Nations Secretary General.