EU ministers meeting in Paris have selected Bulgaria's Kristalina Georgieva as the bloc's candidate to head the International Monetary Fund. The fractious vote revealed further divisions within the European Union. 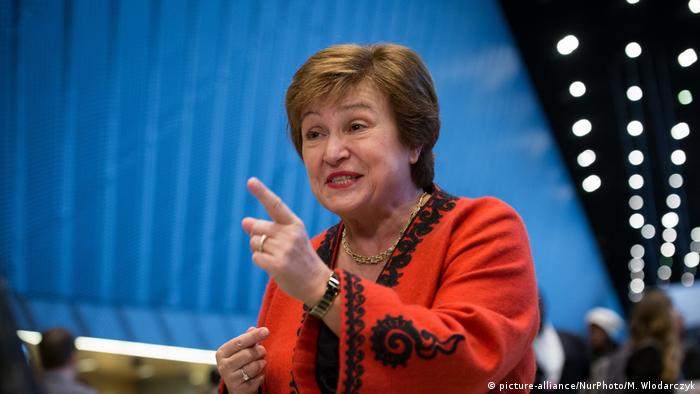 The World Bank's second-in-command has emerged as the European Union's candidate to lead the International Monetary Fund (IMF).

Read more: Bretton Woods at 75: Has the system reached its limits?

But the Bulgarian economist narrowly failed to gain a qualified majority used in EU voting, which requires getting the support of 16 of the bloc's 28 member states representing 65% of the EU's 500 million people.

Nonetheless, she appears to be the EU's pick. After the vote, outgoing European Commission President Jean-Claude Juncker congratulated Georgieva on Twitter.

"Congratulations, @KGeorgieva on your nomination as Europe's candidate for Managing Director of the #IMF. You have all of the qualities needed to make an effective contribution to the IMF's mission," he wrote.

The managing director of the IMF has traditionally been a European, while the head of its sister organization, the World Bank, has been a US citizen. Georgieva would take over from Christine Lagarde, who has resigned to head up the European Central Bank.

After the vote, Georgieva said she would be taking a leave of absence from her World Bank responsibilities during the IMF nomination period.

If confirmed, Georgieva faces another issue. She turns 66 in August, and 65 is the maximum age for the incoming managing director. But diplomatic sources have said the EU and the United States would agree to change the age rule.

A group of countries led by the Netherlands and Germany had backed Dijsselbloem, but they were outnumbered by France and the southern and eastern states that backed Georgieva.

Georgieva has held the second-most senior position at the World Bank since 2017. She served as EU budget commissioner from 2014 to 2016, and EU commissioner for international cooperation and development from 2010 to 2014.

Candidates for the head of the IMF must be put forward by September 6. Other countries are expected to nominate candidates, but as the biggest donors, Europe and the United States have the most vote shares. The IMF plans to select its new chairperson by October 4.

German Defense Minister Ursula von der Leyen, a member of Merkel's conservatives, has been confirmed president of the EU Commission. But just who is she? DW profiles the Brussels-born doctor and her time in Berlin. (16.07.2019)