The upcoming EU leader Ursula von der Leyen said she would try to bring balance between "smaller and bigger countries" and various regions of the bloc. Speaking from Zagreb, she also praised Croatia as a "success story." 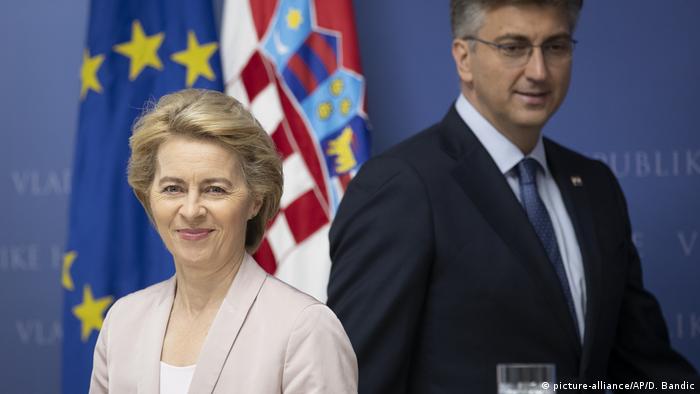 German politician Ursula von der Leyen pledged to support Croatia as the country works towards becoming the part of the free-travel Schengen area and entering the eurozone. Von der Leyen also thanked Prime Minister Andrej Plenkovic for endorsing her as the next EU Commission leader during a joint press conference in Zagreb on Tuesday.

She described Croatia, which joined the EU in 2013, as "success story" and a "role model for many other countries."

"The world wants more Europe and needs a powerful European voice, which we can only have if we are united," she said, according to translated remarks. "We all know that challenges can only unite us, make us stronger and more successful."

The former German defense minister is set to take over as EU Commission president in November. On Tuesday, she said her political goals were to "balance the east and the west, to balance the north and the south" in the 28-country bloc. She also said she would try to achieve balance between bigger and smaller countries, as well as new members, such as Croatia, and longtime EU states.

Von der Leyen's visit to Croatia comes just days after her trip to Poland, the country ruled by a conservative government which repeatedly bumps heads with Brussels over issues such as court independence and migration. Even before taking office, Von der Leyen positioned herself as a mediator between the old and the new EU, Polish journalist Adam Szostkiewicz told DW at the time.

Separately, the 60-year-old called for more understanding for countries such as Poland and Hungary when it comes to the rule of law, telling the Süddeutsche Zeitung daily that "nobody is perfect."