Xi Jinping is set to become the first Chinese president to travel to North Korea in 14 years. The visit comes as denuclearization talks between North Korea and the United States appear to be at a standstill. 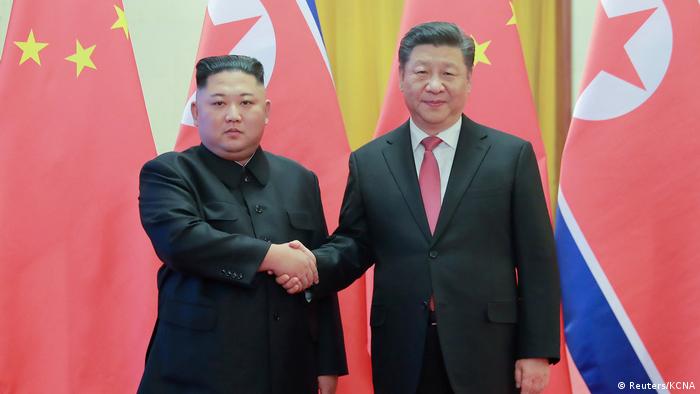 China's state media announced on Monday that President Xi Jinping will make a state visit to North Korea this week.

The Xinhua news agency reported that Xi's visit on Thursday and Friday came at the invitation of North Korean leader Kim Jong Un. State broadcaster CCTV said the two leaders will meet during the two-day trip.

Xi's visit will be the first by a Chinese leader in 14 years, though Kim has visited China four times since March 2018. The trip coincides with the 70th anniversary of the establishment of diplomatic relations between the two countries, CCTV said.

China expert Bernt Berger from the German Council on Foreign Relations told DW the trip would not throw up any surprises and was largely "symbolic."

"China does adhere to international sanctions on North Korea's nuclear program," he said. "But it does support diplomatic solutions and the opening up of North Korea's economy. However, China will not unilaterally start to ease sanctions."

The state visit by the Chinese president comes as US talks with North Korea regarding its nuclear program appeared to have stalled. A February summit between Kim and US President Donald Trump in Vietnam did not lead to an agreement.

North Korea: Fake news on both sides is the norm

Stories of the secretive state captivate media and audiences alike. But often the stories are only half true, sometimes outright false — especially those coming from a particular South Korean source. (04.06.2019)

A South Korea paper citing an anonymous source said that Kim Hyok Chol was accused of being a US spy and killed. Several officials who also worked on the meeting with the US have been killed or jailed, the paper said. (31.05.2019)