China's Xi and Russia's Putin meet for talks in Shanghai 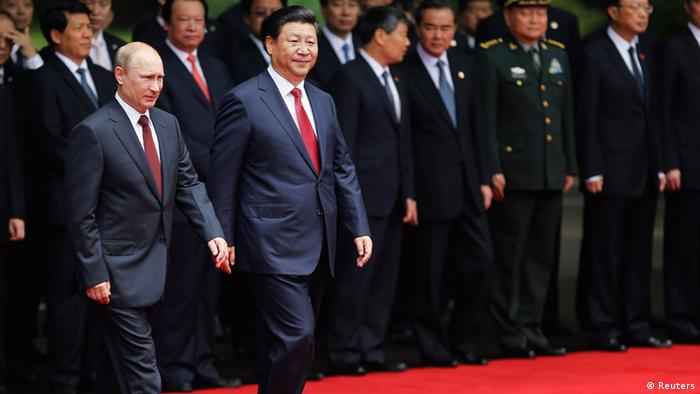 Putin arrived in Shanghai on Tuesday to begin a two-day visit to China, at which he was expected to sign a deal on gas supply and infrastructure projects with his Chinese counterpart.

After a welcoming ceremony at the airport, the two leaders held the first of a set of formal talks, according to the Chinese state news agency Xinhua.

"China is our reliable friend," Xinhua reported Putin as saying ahead of the visit. "To expand cooperation with China is undoubtedly Russia's diplomatic priority."

Among the more significant bipartite deals to be agreed between the countries is a proposed 30-year contract between Russia's state-controlled fuel supplier Gazprom and China's National Petroleum Corp. The Kremlin on Tuesday said both sides had yet to agree on a price at which Russia would supply gas.

The leaders were also expected to sign a $400-million (290-million-euro) deal to build a cross-border bridge over the Amur River between northeastern China and eastern Siberia.

It is Putin's first visit to China since Xi became head of state, with both leaders eager to display a united front.

The visit comes as Russia faces economic sanctions and rebukes from the West over its perceived interference in and military presence near Ukraine, where Moscow is accused of fomenting pro-Russian separatism. China, meanwhile, has seen a flare-up of recent maritime territorial disputes with some of its neighbors - most notably in the past week with Vietnam.

Xi and Putin were due to oversee the beginning of a joint seven-day naval exercise in the northern part of the East China Sea, both countries having developed a strategic partnership after the collapse of the Soviet Union.

The pair are also scheduled to attend the fourth leaders' summit of the Conference on Interaction and Confidence Building Measures in Asia (CICA).

The conference describes itself as a "multi-national forum for enhancing cooperation towards promoting peace, security and stability in Asia."

CICA's 254 members include China, India, Pakistan and Russia, with the US being one of nine observer states.

On the sidelines of the security summit, Putin was also expected to meet UN Secretary General Ban Ki-moon, with the subject of Ukraine likely to be high on the agenda.