President Xi Jinping has landed in Hong Kong to mark 20 years since the territory was handed back to China by Great Britain. Dozens of pro-democracy activists have already been arrested ahead of his visit. 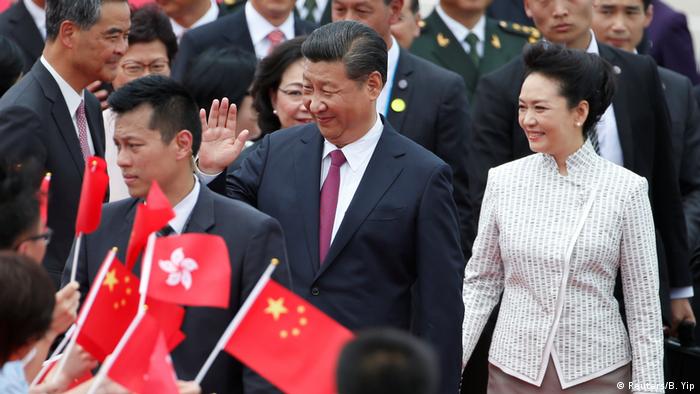 People waving red Hong Kong and Chinese flags greeted China's President Xi Jinping as he arrived on Thursday for a visit that will mark two decades since China took control of the former British colony.

The three day visit to Hong Kong is Xi's first since he became leader in 2013 and comes amid growing fears that Beijing is chipping away at the semi-autonomous territory's freedoms.

"After nine years I am once again stepping on Hong Kong soil. I feel very happy. Hong Kong has always had a place in my heart," he said in a short speech on the tarmac Hong Kong's main Chek Lap Kok airport.

He added that China would support Hong Kong "as it always has."

Xi said he wanted to ensure Hong Kong's "one country, two systems" deal that has granted the territory civil liberties like freedom of speech and autonomy from mainland China for years.

However, a string of recent incidents - notably the detention of Hong Kong booksellers on the mainland - have raised concerns that Beijing is interfering in the areas of politics, education and media.

As if to highlight China's growing military might, the Liaoning aircraft carrier was steaming towards Hong Kong as part of a flotilla on a "routine training mission" that includes a stop in Hong Kong for the anniversary, the defense ministry said.

Authorities in Hong Kong deployed heavy security across the city with police and barracades lining the streets around a hotel complex where the Chinese leader is expected to spend most of his visit. Thousands of police have been deployed to maintain order as protests around the city simmer.

Three pro-democracy groups said that 26 of their members were arrested on Wednesday for staging a sit-in at the "Golden Bauhinia" flower sculpture, where some of the anniversary celebrations will be held. More than 20 activists remained in custody on Thursday morning for causing a "public nuisance."

High-profile activists including Joshua Wong and Nathan Law were arrested during the protest and remained in custody after Xi's arrival, the groups said. Wong is a student activists who helped lead 2014's "Umbrella Movement" protests along with Law, who was elected to Hong Kong's legislature last year.

Animosity towards China has grown in recent years, particularly among young people. The failure of the "Umbrella Movement" protests to herald in democratic reforms have led some Hong Kong activists to call for a full split from mainland China.

On Saturday, Xi will oversee an inauguration ceremony for Hong Kong's new leader, Carrie Lam. Protests calling for full democracy are expected to take place after Xi leaves on Saturday and could draw tens of thousands of people.

Britain ceded control of Hong Kong to China at the stroke of midnight on June 30, 1997. Under the handover agreement Beijing agreed to maintain Hong Kong's capitalist system for 50 years.

British Foreign Secretary Boris Johnson said in a statement Thursday that he hoped Hong Kong would continue to develop a democratic government and remain accountable.

"Britain’s commitment to Hong Kong – enshrined in the Joint Declaration with China – is just as strong today as it was 20
years ago," he said.