China's nine-dashed line has 'no basis under international law'

Manila is hoping for the Permanent Court of Arbitration to declare invalid most of Beijing's South China Sea claims. DW speaks to Supreme Court Justice Antonio Carpio about the case and its likely implications.

China's territorial claims in the disputed South China Sea came under international scrutiny earlier this month when the Permanent Court of Arbitration in The Hague began hearing a suit filed by the Philippines. Manila has asked the tribunal - which operates under the United Nations Convention on the Law of the Sea (UNCLOS) - to declare China's claims to virtually all the South China Sea invalid, arguing that Beijing's actions have trampled on other nations' rights and have caused considerable damage to the environment.

The hearings started early July examining China's contention that the tribunal doesn't have the authority to assume jurisdiction over the Philippine case. Beijing, which for this reason has refused to take part in the case, has called on Manila to withdraw the case and engage instead in bilateral negotiations.

Maritime lawyers note the Chinese routinely outline the scope of their claims with reference to the so-called nine-dashed line (main picture) which takes in about 90 percent of the 3.5 million square kilometers South China Sea on Chinese maps. Vietnam, Malaysia, Brunei and Taiwan also challenge Chinese claims over most of the resource-rich sea, but have yet to join the Philippine suit. The US has expressed concern that China's efforts to build artificial islands in the area carry a military dimension that could undermine the US' naval and economic power in the Pacific. 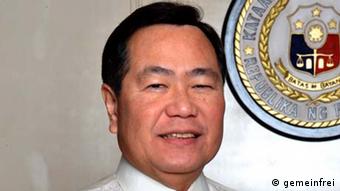 Carpio: Almost all scholars of the law of the sea, except those from China, agree that the nine-dashed line egregiously violate UNCLOS

In an interview with DW, Antonio T. Carpio, a Senior Associate Justice of the Supreme Court of the Philippines, talks about why the court is likely to rule in the Philippines' favor and why the reputational cost to China would be immense should Beijing decide to ignore a ruling adverse to China.

DW: What is at the core of the Philippines' case at The Hague against Beijing's South China Sea claims?

Antonio Carpio: The core of the Philippines' case is that China's 9-dashed lines, under which China claims 85.7 percent of the waters of the South China Sea, are contrary to international law, in particular to UNCLOS.

Put differently, can a coastal state like China claim maritime zones from its coastlines beyond the 350 nautical miles (NM) maximum limit (200 NM Exclusive Economic Zone (EEZ) and additional 150 NM extended continental shelf) allowed under UNCLOS? Such a claim, whatever the reason may be, is clearly invalid under UNCLOS, the constitution for the oceans and seas of our planet. China and the Philippines are parties to UNCLOS.

What would the Philippines like the court to ultimately decide on?

The Philippines is asking the tribunal to declare China's nine-dashed line void as a claim to maritime zones, and that the waters enclosed by the lines cannot prevail over the EEZ and extended continental shelf of the Philippines.

The Philippines is also asking the tribunal to declare that certain geologic features are either rocks entitled only to a 12 NM territorial sea or low-tide elevations entitled to no maritime zone whatsoever, regardless of what state has sovereignty over these geologic features.

China recently urged the Philippines to ditch its attempt to solve South China Sea territorial disputes and instead negotiate with Beijing directly. What do you make of Beijing's decision to refuse the court's jurisdiction and not to take part in the proceedings?

China's refusal to participate in the arbitral proceedings simply means that China knows it cannot justify its nine-dashed line claim under UNCLOS.

Almost all scholars of the law of the sea, except those from China, agree that the nine-dashed line egregiously violate UNCLOS. In this day and age, it is incredible that a state is still claiming almost an entire sea as its sovereign waters.

How confident are you that the court will rule in the Philippines' favor?

If the tribunal will allow China's nine-dashed line to stand, then that means UNCLOS does not apply to the South China Sea. If UNCLOS does not apply to a vital sea like the South China Sea, where one-half of the world's seaborne trade passes through, then there will be grave doubt whether UNCLOS can resolve similar disputes in other oceans and seas of our planet. It will be the beginning of the end of UNCLOS.

What is likely to happen on the ground even if the Philippines were to get a favorable decision from the international tribunal?

Beijing has already announced that it will ignore any ruling of the tribunal that is adverse to China. The Philippines will be left with no alternative but to bring China's defiance of international law to the UN General Assembly and other international fora. In the end, the reputational cost to China will be immense.

Like many other states that initially defied adverse rulings of international tribunals, China will realize that the cost of compliance with the ruling is far lesser than the cost of non-compliance.

I expect that in the end, after many years, China will eventually realize and accept that no state, whether coastal or landlocked, will ever agree to China's claim of sovereignty or sovereign jurisdiction to almost the entire South China Sea.

What do you make of the stance taken so far on the issue by other ASEAN members and South China Sea claimants?

Amid rising tensions in the South China Sea, US Defense Secretary Ashton Carter has said the US will continue to play a "pivotal" role in Asia. DW spoke to analyst Ernest Bower about Washington's role in the dispute. (02.06.2015)

Manila recently accused Beijing of damaging some 120 hectares of coral reef systems near the Spratly Islands. DW speaks to analyst David Rosenberg about the ecological impact of China's activities in the South China Sea. (16.04.2015)

Other ASEAN claimant states are situated differently from the Philippines. Some of them have strong trade relations with China. At this time they are not prepared to question China's nine-dashed line before an UNCLOS tribunal even though large areas of their EEZs are also encroached by the nine-dashed line.

However, China's massive reclamations in the Spratlys, and the construction of Chinese naval and airbases in the reclaimed areas close to their coasts, have certainly unnerved them. Only time will tell whether they can maintain their present stance.

Do you think ASEAN's stance will/should change if the court rules in the Philippines' favor?

You are an international law expert and Senior Associate Justice. What is your personal involvement in the case?

I am only doing my civic duty as a Filipino citizen to defend the Philippines against China's encroachment of our country's maritime zones - maritime space guaranteed under UNCLOS. I do this by giving lectures, here and abroad, on the South China Sea dispute. The world must know that China's nine-dashed line has no basis whatsoever under international law.

Antonio T. Carpio is an incumbent Senior Associate Justice of the Supreme Court of the Philippines.